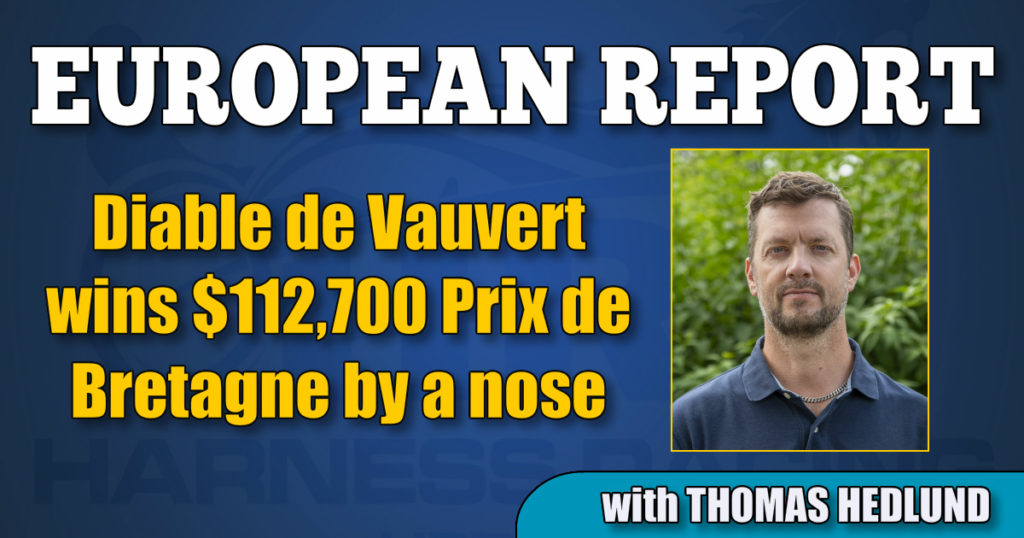 The road towards the 2021 Prix d’Amérique took its first serious start at Vincennes racetrack on Sunday afternoon (Nov 21) when the $112,700 Prix de Bretagne was held. It was the first out of four B-races ahead of the Prix d’Amérique in January.

As usual, many of the more merited trotters are participating, making the four B-races spectacular to watch. Trainers and drivers are aiming to have their horses peak for Sunday, Jan. 31 when the biggest trophy in European trotting is at stake.

Sunday’s Prix de Bretagne was a spectacular show in many respects, not the least of which because of the thrilling finish when, it seemed, half the field fought for a top three place which would have guaranteed them a spot in the 2021 Prix d’Amérique.

Jean-Michel Bazire sat behind the first choice Valzer di Poggio and the duo aimed for the front position at an quite early stage since driver Pierre Vercruysse was happy to give his Drole de Jet a pocket trip over the 1.6 miles long distance.

Valzer di Poggio still had control of the race when the field turned for home, but the leader’s gait became worse at the stretch, so when attacking opponents challenged seriously closer to the wire, the leader went off stride and was disqualified.

Tough mare Bahia Quesnot had a very strong race three wide during the event’s last kilometer and she was close to the winner, beaten by less than a head as third. The horse that followed her three wide during the last turn, Diable de Vauvert (Prince d’Espace), paired with Gabriele Gelormini, was given full attack command at the top of the home stretch and the Bertrand Le Beller-trained 7-year-old colt came home in a mile rate of 1:57.1.

Philippe Allaire’s Feliciano finished quickly between horses and was a nose behind the winner when the wire was crossed.

Diable de Vauvert, Feliciano and Bahia Quesnot all qualified for the 2021 Prix d’Amérique.

For the rest of the gang, the next occasion to grab a spot in the big race is scheduled for Dec. 13 in the $112,700 Prix du Bourbonnais.

Qualification races for Prix d’Amérique: (Number of horses that qualifies)

The biggest race for 2-year-olds in Sweden was held at Jägersro racetrack on Saturday (Nov. 21) and Per Nordström-trained Islay Mist Sisu (Beer Summit) dominated the race via a nice wire-to-wire win in 1:59.3.

Svante Båth-trained Mellby Jinx was served a first over trip by Erik Adielsson and Mellby Jinx and leader Islay Mist Sisu fought bravely in a thrilling show over the stretch. A short nose separated the two horses at the wire.

Nordström knows how to get a filly first in this specific race. The last previous time a filly won Svensk Uppfödningslöpning was in 2012, when Denim Boko beat the boys paired with Nordström.

Holger Ehlert is the new trainer for the Orlando Vici son Chief Orlando and the horse’s debut for Ehlert ended in success in Italy on Sunday night (Nov. 22).

Chief Orlando, driven by Vincenzo Gallo, won his elimination in 1:54.3 and was outstanding from the lead in the final in 1:54.

The Gran Premio Palio dei Communi, contested on a half-mile track in Montegiorgio, Italy, is one of the most traditional races for the older elite in Italy and when COVID-19 doesn’t stop people from wildly celebrating, the night in Montegiorgio usually contains true festivity in the Italian way.