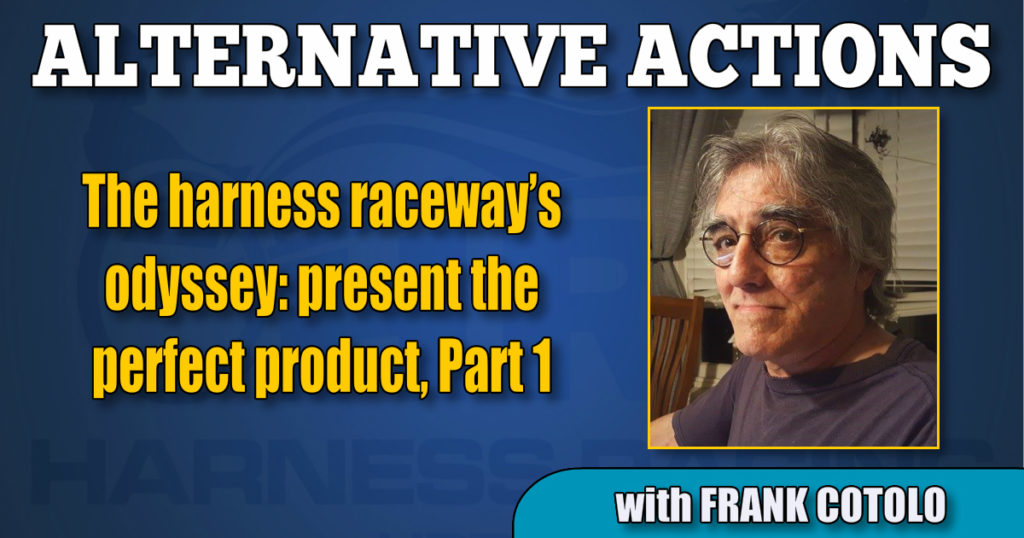 Homer may have shouted the miracles of Apollo, but he did not lead us to an oracle that could predict how harness racing might alter its usual format to arouse a fresh generation of followers.

That goal is, perhaps, the sport’s odyssey, but sometime it must end, else it is a worthless pursuit.

Since I turned my main career to games and gaming, I witnessed many attempts to reshape harness racing’s traditional parameters. It always seems like a fruitful exercise to tweak the components of standardbred pari-mutuel racing so it might appear fresh and appealing to neophytes, while at the same time remain sensitive and loyal to veteran, old school bettors. As of this writing, though, all initiatives, no matter how creative or dumb, have failed. The face of harness racing remains that of a curmudgeon, when it should be a vernal call to adventure.

All right, I know handles are up based upon a prolific flow of single—and multi-race exotics attracting bettors with a lottery mentality (wagering volume is the root of all racetrack success). However, putting more “show” into the show business of the sport could only put more flesh on that essential kind of success.

Some of the concepts that tanked over the past few decades were actually good ideas. They supported the risky journey of change that, though it rarely incites phenomena, might deliver unexpected success by bumping into another, better idea. Let’s take a look at some of those bold overtures as best as my memory serves.

Knowing that horses’ post positions is a meaningful element to bettors, this idea forced the handicapper to focus on the horse, not from which post it left in a race. The post positions were not designated in the program — they were drawn before the race. Apparently, the post position element was even more important to bettors than expected. The process left those bettors unsatisfied with their posts feeling cheated; a feeling not balanced by those feeling benefit from the plan. That is not a good atmosphere for any paying audience.

Racing on the turf:

The idea was simple: present harness races on both surfaces offered in thoroughbred racing — dirt and turf. Because of its popularity with “the runners,” there was every reason to think that harness racing bettors would embrace the challenge when a race went from dirt to turf and vice-versa. Since the breeds shared many racetracks with thoroughbreds, it would be no expense to feature some races on either surface.

When I resided in Great Britain, each breed at every track raced and mostly trained solely on grass. Harness racing was not as prevalent as the runners but the sport had its own raceways. Though small and country-fair oriented, pacers and trotters were steered around steep turns and green stretches without bettors’ objection. It was rugged, for sure, and it affected race times, but the Brits were not weighed down with the sport’s traditional standards. That was strange in itself, since it was the British thoroughbred Messenger that became the pacer’s foundation sire.

In North America, though, presenting harness races on the turf was a flop. It did not attract a new audience and the veteran fans saw it as a miserable handicapping element, as an obstacle to measuring a horse’s speed, no less its specific gait talents or lack of them for negotiating a whole new surface.

In 1997, I was briefly involved with promoting Colonial Downs in horse-racing-rich Virginia. I was truly jazzed at its primary feature — a one-turn mile for harness races (satisfying the one-mile standard for racing while eliminating crucial turns — it was actually a 1 ¼ single-turn mile, as was installed and used with great success in the ‘80s at Hollywood Park for thoroughbred racing).

It was obvious races would get faster (the first sub-1:50 trotting mile was recorded in 2008) but I thought they would also become more strategic, making the outside lane less daunting, adding chances for more horses to thrive in contests of lesser class, an appealing factor for bettors. The track’s autumn harness racing meet offered a pastoral brilliance and the finer remnants of summer, an atmosphere made for large crowds. However, after 13,000 showed up for the opening of the rural-area structure between populated Richmond and Williamsburg, the bloom was desperate to stay on the rose. Crowds dwindled, matters between horsemen and management soured, and vapid promotions commingled to make a one-mile harness race moot.

Sometimes, even great notions go limp, so the energy of purpose remains untested. There is no limit to creating a significant brand for harness racing with designs that attract new fans and bettors and combinations of both.

In Part 2 of this topic, we look at some more failed attempts versus a continued pursuit for emblazoning the sport.