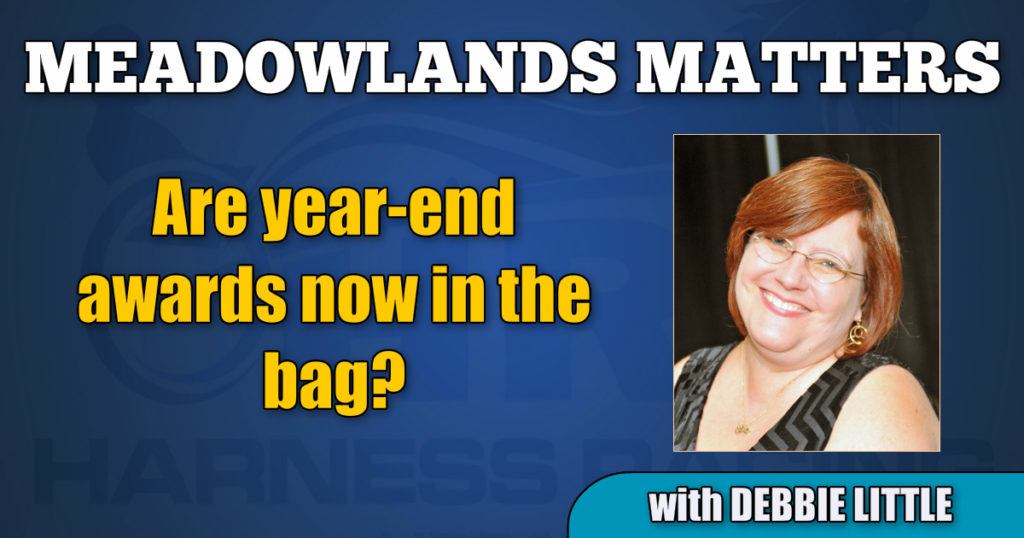 Are year-end awards now in the bag?

Saturday’s TVG / Final Four extravaganza at the Meadowlands went a long way toward solidifying which horses will win Dan Patch awards, but there’s not a lock in every division.

(Editor’s note: This is the first in a regular column by veteran racing writer Debbie Little with a sole focus on the Meadowlands Racetrack. Our hope is that it will appear weekly).

In my opinion: yes and no.

I believe the race between Atlanta and Manchego tightened last night, but still leans towards Atlanta.

Going into the TVG Open Trot, the two award-winning mares had met five times during the season and Atlanta had a 3-2 edge in
victories.

If Atlanta had won the TVG, I think she would have locked things up, but since Manchego won in her retirement race, it opens the door for her.

Now they both have three wins apiece. So how can they be separated?

In the Spirit Of Massachusetts, Manchego went the fastest trotting mile of the year.

The statistics presented are ones that can be considered when making a choice for divisional honors, but that does not mean that they are the only ones that will or should be considered.

For example, in 2019 Atlanta and Manchego met six times. Atlanta only won two of those races, but Manchego didn’t win any of them. However, in every one of those races, Atlanta finished in front of Manchego.

But Manchego went 1:49 in the Allerage at the Red Mile which turned a lot of heads and apparently translated to support since in the voting for divisional honors. Atlanta only won by two votes over Manchego.

Meanwhile, congrats to Bettor’s Wish on going out a champion while pulling double duty on the track and in the breeding shed.

He was barely asked to go and he opened up easily in the stretch on a talented field in the TVG Open Pace. Divisional championship in the bag.

There’s also no question that Kissin In The Sand locked up divisional honors with a win in the TVG Mare Pace.

Her rebuff in the stretch of Shartin N was something to behold. That’s the way you want to retire.

It would have been nice to know that Plunge Blue Chip was retiring in advance so she could have received the same pomp and circumstance as Manchego, Bettor’s Wish and Kissin In The Sand.

Although she is not in the conversation this year for divisional honors, Plunge Blue Chip should be applauded for an outstanding career.

Despite what I’ve read, I don’t believe Lady Chaos locked up the 2-year-old trotting filly division with a Crown victory.

Anoka Hanover, who dominated in the $451,800 Goldsmith Maid and now has 10 wins in 14 starts including the last seven in a row, has to be part of the discussion.

Dexter Dunn and Nancy Takter were also very impressive tonight and should be named Dan Patch Driver and Trainer of the Year, respectively.

Dunn won four races on the night including the three horses whose retirements were announced, while Takter won all driven by Dunn.

Maybe because I live in New Jersey, it’s certainly not the place I would choose to retire. However, if I were a horse there’s no better place, than at the top track in the world, The Meadowlands.

In addition to the top racing contested on the night, it was nice to see the emotions shown by our horsepeople for their retiring horses.

Any fan watching at home or at the track couldn’t help but see the love, amidst the tears, that the connections have for their horses. Showing something so positive during a difficult time in our country was wonderful to see.