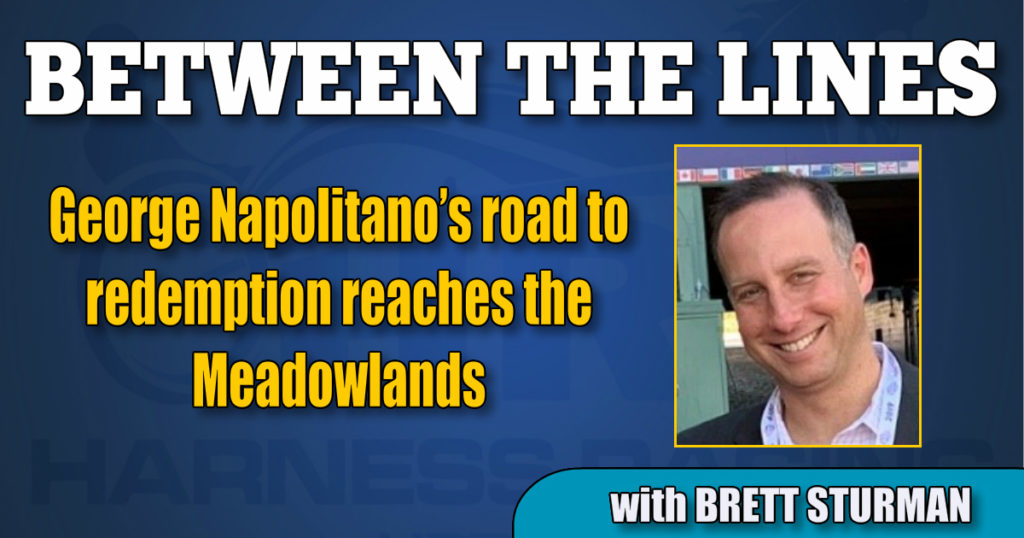 At 427 wins to date in the pandemic-shortened harness racing season, there’s nothing on the surface that’s out of the ordinary in seeing driver George Napolitano’s name towards the very top of all drivers in dash wins. After all, Napolitano was North America’s leading dash winning driver in 2010, posted a career best 834 wins in 2015 and is perennially in the top two or three every year for the past decade in that category.

But what’s different this time around is that wins stemming from Napolitano’s aggressive style and uncanny knack to get the most out of a horse in the stretch consists of wins from the state of New Jersey.

On Sept.12, Napolitano made his return to the sport’s premier racetrack in East Rutherford for the first time since 2006. With 18 wins between his re-emergence less than two months ago at the Meadowlands, only two drivers at the track have more wins during the timespan. This weekend, Napolitano is slated for another 20 drives over the course of tonight and Saturday and is en route to becoming a Meadowlands mainstay.

But even as Napolitano has ascended back into harness racing’s better graces including acceptance into New Jersey and the Meadowlands, it’s worth noting what led the talented driver to exile to start with. Napolitano’s well-documented past shows a consistently troubling stream of major violations and altercations, both as a trainer and driver, professionally, as well as personally.

Between 2000 and 2006 alone show multiple suspensions for his horses testing positive for banned substances, as well as suspensions for conduct detrimental to the best interest of horse racing and for assault and battery to another driver. As a result, Napolitano was absent from the sport for nearly all of 2007 and has returned following then exclusively as a driver.

For over 10 years now, Napolitano has not had a single major violation. “I’m so grateful that I got a second chance in life. You know, I went through some bad things, but I’ve been clean for 15 years now and people recognize that,” Napolitano said.

Napolitano is known for his dominance exclusively at Pocono Downs and at Harrah’s Philadelphia in Pennsylvania, and he describes what finally led him back to New Jersey. He said, “I got suspended a few times when I was a trainer 15 years ago and Dick [Richard] O’Donnell at the NJRC (New Jersey Racing Commission) kept denying my license – I had been trying for years. During the pandemic we were doing qualifiers at Tom Cancelliere’s farm while everybody was just qualifying and hoping for some tracks to open and Dick O’Donnell paged me to the judges and I’m like ‘Oh my God, what does he want?’ I was just there qualifying – you don’t need to have a license to qualify at the farms. And he called me up and said George Napolitano, ‘I’m Dick O’Donnell and I’m the guy that’s been denying you for years and I’m the guy welcoming you back to racing in New Jersey.’ And that’s how it started,” said Napolitano. “That was one of the best days in my life in a long time because you know, I’ve been the leading driver in Pennsylvania for 15 years, I race at Pompano, and to be welcomed back with open arms at the Meadowlands meant a lot to me.”

To be sure, Napolitano still has his share of detractors. Some claim that Napolitano’s success in the past has been aided by the high percentage trainers that he routinely drives for, though at the Meadowlands he’s proving he can win when driving for anyone.

“The Meadowlands seems like it’s more open there, and I still don’t really know a lot of people there,” Napolitano said. I’m getting the odd catch drive pick-up and I’m just trying to work my way in. And I’ve been on a few horses where I didn’t even know who the trainer was, and I won with it. I’m like ‘Who is this guy; I have no idea who he is.’ I used to know everybody. But I’m figuring it out and it won’t take me long. At the end of the day I drive with all those guys anyway. So, it’s not totally different; it’s just a different place.”

Over the past few weeks at the Meadowlands, Napolitano has driven horses for trainers across the spectrum. Some of those include 2-year-old horses for large operations such as Tony Alagna and Ake Svanstedt. Despite all his success through the years Napolitano has landed only limited opportunities in Grand Circuit races – even when those races come to Chester and Pocono. Would establishing himself now at the Meadowlands have the potential to open new doors?

“You want me to tell you the God’s honest truth?”, asked Napolitano. “For years, I’ve had great opportunities for big trainers, and I turned them down. The reason why I turned it down was 15 years ago when I cleaned my life and I got off all the stuff I was doing and just stopped being a bad guy, I made a promise with my wife that I’d work in Pennsylvania and would come right home and I wouldn’t do anything else. And that was the promise I kept to my family. And that’s the reason I don’t get those drives; because I don’t travel.

“I’ve had opportunities to go to The Meadows and to Northfield and those big races and I’ve turned them down. So, when you turn them down year after year they stop listing you. And when those horses come to Pocono, most of the time the trainers are listing the guy who just drove them at The Meadows or somewhere else. I’m totally happy with what I’m doing right now. I’m blessed that Tony Alagna and Ake and his wife and others have given me the opportunity and I’m very grateful to them. But for me, to travel around, it’s not my thing. I’ve got a 15-year-old son that means more to me than traveling to a big track for a big race.”

In addition to Napolitano winning for a myriad of different trainers at the Meadowlands, he’s also disproving the belief by some that he’s a one-dimensional front-end driver. At the Meadowlands, he’s won routinely from off the pace just as often as he wins while being on the front. His keen ability to rock in the bike – often even prior to three quarters – and keep horses alive either on the lead or first over remains consistent. Two weeks ago, he was recognized by the Meadowlands as Driver of the Week.

“My strategy will never change,” said Napolitano. “This old dog – I’m what you get. I’ve been like this for years, so my style isn’t really going to change. I’m very aggressive, I’m a gate man. But at the end of the day you’ve got to be careful at the Meadowlands and you can’t overdo it. It is an aggressive track, it’s a speed track. If you have the horse you have to keep on plowing and make something happen – but you don’t want to overdo it. You can overdo it on a five-eighths and get away sometimes and stumble to the wire and win, but not at the Meadowlands because of the stretch.”

Napolitano’s breakthrough at the Meadowlands thus far has come at a time when the biggest name drivers have been racing elsewhere and the Pocono meet is about to end, but he has no plans of not being a factor at the Meadowlands going forward. Indiana-based trainer Jeff Cullipher is someone that’s teamed very well with Napolitano thus far at the Meadowlands and Napolitano acknowledges the trainer as giving him a big opportunity. “He’s one of the leading trainers in Indiana and he’s put me on some really nice horses at the Meadowlands. He texted me about three weeks ago and asked what my future is; if I was going to leave when the usual guys come back. And I said ‘No, I’m here to stay. I’m not going anywhere. There’s no reason for me to leave.’”