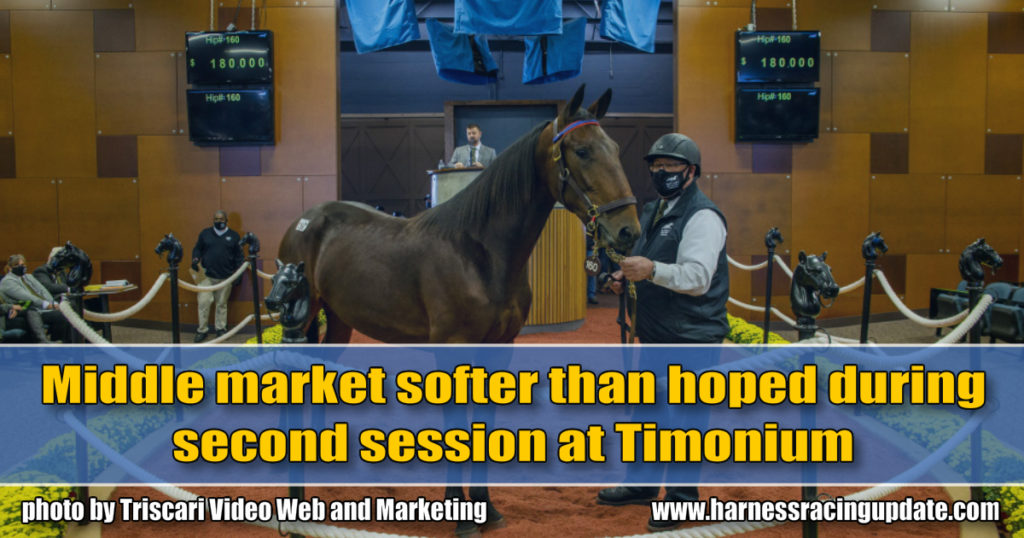 SHSC president and CEO Pete Spears said buyers either, “really wanted a horse or they weren’t as enthusiastic.”

Standardbred Horse Sales Company (SHSC) president and CEO Pete Spears said his hopes that the middle market of the company’s yearling sale in at the Maryland State Fairgrounds in Timonium, MD would hold up well didn’t come to fruition during Wednesday’s (Nov. 4) second of three yearling sessions.

“Basically, the high end is still in demand, but despite my favorable impressions of the middle market yesterday, I thought the middle market was soft for much of the day,” Spears said. “Though, it seemed to pick up somewhat in the last part of the session.”

Keep in mind, this is a pandemic year and most major sales are down from very strong 2019 auctions, so SHSC is following that trend, but being off nearly 30 per cent in gross, so far, is concerning.

The very first yearling sold Wednesday topped the session. Trainer Tony Alagna, agent, signed for Hip #160 Nautical Hanover, a Captaintreacherous colt out of Naughty Marietta, for the price of $180,000. The colt was bred and consigned by Hanover Shoe Farms, which sold seven of the top eight yearlings on Wednesday, including the top three. Hip #410 Ivory Hanover, a Bettors Delight filly out of I’m Sassy, sold for $170,000 to John Floren. Hip #178 Peerless Hanover, a Cantab Hall filly out of Perfect Chance, sold to Trond Smedshammer for $150,000.

Serge Godin’s Determination continues to lead all buyers with $1,479,000 in purchases. Godin has bought 10 yearlings at the sale. Burke Racing Stable has paid $800,000, total, for 14 yearlings to rank second among buyers. David McDuffee is third with $765,000 spent on two yearlings on day one, including the current sale topper Hip #86 Delilah Hanover, which sold for $440,000.