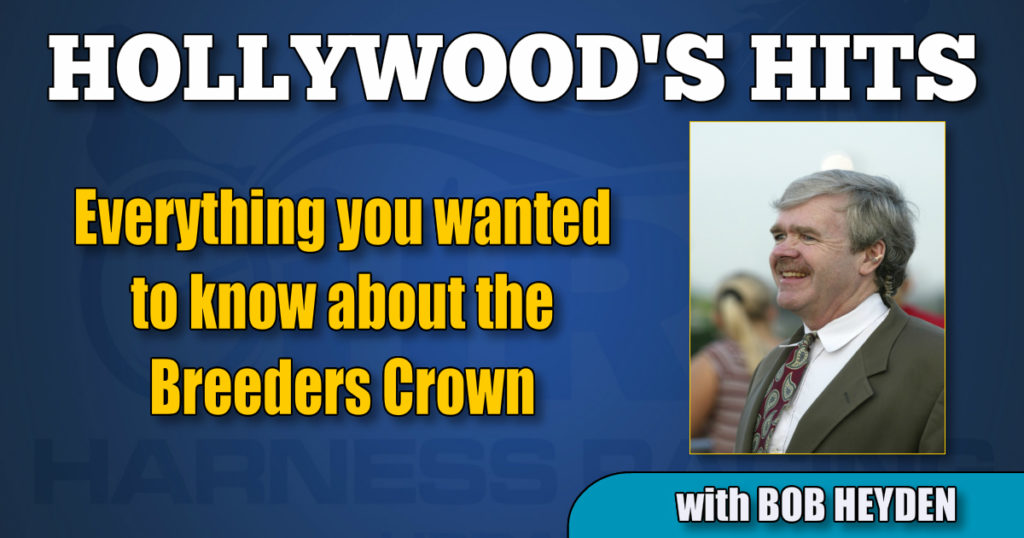 Everything you wanted to know about the Breeders Crown

Let’s start this Breeders Crown preview by looking at the drivers.

Twenty-eight times a driver has banked $1 million in just the Breeders Crown in a year, but just once in the 20th century — John Campbell in 1995.

Andy McCarthy accomplished the feat last year, winning four Crown races — and he was not in five of the 12 finals.

The top seven drivers in Breeders Crown history with at least 20 wins have won a combined 204 Crowns.

Joey Putnam, 22, is in this weekend with Rockin Nola as the youngest driver; James Yoder, 26, will try his luck, as will Joey Bongiorno at 27, and Bob McClure, now 30.

If Tall Dark Stranger gets voted HOY, it will be the second time his driver, Yannick Gingras, will have gotten the best of Captaintreacherous, the sire of Party Girl Hill. Yannick was the driver of $37 upset winner in Rockin Amadeus over the Captain in the 2-year-old pacing colt Crown in 2012.

Can you top this?

Yannick Gingras started out in the Breeders Crown just 1-for-31, winning with Southwind Serena in the 3YOFT in 2008. Since then, Yannick has been a torrid 22-for-89, just under 25 per cent. But get this: A $2 win bet on his first 31 Crown drives returned you more than a $2 win bet on all of his last 89!

Matt Kakaley’s 2019 Breeders Crown performance deserves a second look. I know, I know. He didn’t win a Crown, but check this out:

He had 5 drives and was:

No other driver has ever gotten money with more than one 100-1 shot in any year of the Crown.

Trainer Ron Burke doubled up with Buck I St Pat and Won The West, then took his first freshman Breeders Crown as Sweet Lou romped in 2011 in Canada. He is on the doorstep of $250 million in career earnings.

Trainers at or over 50 per cent with double digit starters

All nine wins for Trond Smedshammer in the Breeders Crown are with Brian Sears driving. Including their first, Stroke Play in 2003.

Joe Holloway sent out history’s first 1:50 2-year-old, doing so in the 1998 Breeders Crown winning with Badlands Hanover. This came four years after he won it with Jennas Beach Boy, who then became the only one to parlay that into a Crown pacer three peat. Holloway looks for more history this year with the undefeated Perfect Sting.

The Hambletonian and Crown

Just 6-of-37 Hambletonian winners in the history of the Breeders Crown have also won the 3YO Crown. That includes the scratch of Ramona Hill this year.

Just 6-of-36 runner-ups in the history of the Hambletonian have won the sophomore Breeders Crown.

Muscle Hill is the only Hambletonian winner in the 21st century to do both. Before that, his sire, Muscle Yankee, did it in 1998.

Speaking of the Hambletonian, the first two winning sires of the Breeders Crown Open Trot are Sandy Bowl and Nearly Perfect. Their sires are Super Bowl and Songcan. Wait, that pair raced in the 1972 Kentucky Futurity as Super Bowl was going for the Triple Crown. That year, yes. Songcan in both the elim and final stepped on the wheel of Super Bowl giving him a flat tire — both times — and he still overcame it to win the Triple Crown, one which the sport would not have on the trot for the next 32 years.

$2 Million already without a Crown

Beach Towel and Loyal Opposition were the first two horses to have $2 million earned before they captured their first Breeders Crown. Atlanta is up and over $2.5 million as she looks for her first Crown this year. The all-time record belongs to, you guessed it, Foiled Again, who was at $5.4 million in 2013 at Pocono when he took home first prize in his lone Crown score.

#1 Ima Diamond Babe— James Yoder is trying to complete just the third father and son driving Breeders Crown duo. Carl-Rod Allen and Randy-Ron Waples. Was 83-1 last week and is in too deep tonight.

#2 Iteration— Full sister to Gimpanzee looks to give Chapter Seven another win in this division (2018). Marcus Melander trying to become the first trainer to win a Crown at ages 26-27-28.

#3 Splash Blue Chip— pays her own way. Granddaughter of Muscle Hill looks to get Team Svanstedt on the Breeders Crown board.

#4 Mazzarati— is my pick. Anything but a fluke in her elim, she’s ready for more. One of five Cantab Halls in the Crown — remember he was the last 2-year-old to be named Trotter Of The Year (2003).

#5 Lady Chaos— won her elim and was asking for more. Linda Toscano-Richard Gutnick teamed for the 1-2 2012 HOY ballot all by themselves with Chapter Seven and Market Share.

#6 Hello I Love You— is a daughter of a Breeders Crown winning dam Flirtin Miss. Remember Tony Alagna won three Breeders Crowns a year ago and there was plenty of value.

#7 Big City Pearl— Verlin Yoder is one of eight drivers to have a perfect 1-for-1 record in the Crown. Tough spot.

#8 Swift Swanda— Trace Tetrick is the only driver to start his Breeders Crown career 3 for his first 6. Very difficult spot to add to that in here.

#9 Gotta Believe— closed strongly in her elim —at 50-1 too. Julie Miller and Andy were somehow not in the 2019 Crown, but their presence will be felt throughout this year. Can hit the ticket.

#10 Presto— is the second finalist in here whose dam won the Crown (Susies Magic in 2006). Right there every start.

#1 Take All Comers— races for the Runthetable Stables. Thanks for everything you did/keep doing Sandy Farber and family! Son of 2015 Breeders Crown winner Creatine.

#3 In Range— is one of two that clicked for Tetrick-Melander in the elims. Only worse than second once. Big chance.

#4 On A Streak— Bob McClure is trying to be the 95th different driver to win a Breeders Crown race. Luc Blais has won three, starting with Intimidate and then Emoticon Hanover twice.

#5 Venerate— won the Mohawk Million and now tries for the Crown double, which has not been done since 1985 Express Ride, when he too won a million-dollar event (Peter Haughton Memorial) and the Breeders Crown.

#6 Muscle Dynasty— has a tall assignment but remember the Crown elims yielded a $186.00 horse (Continualou).

#7 Captain Corey— comes off his only loss but is still a figure horse all the way. Howard Beissinger won his first and only Breeders Crown (Defiant One-1987) at 64-Ake Svanstedt is 61.

#8 Delayed Hanover— is the one to beat. Watch the replay of his romp three back and tell me you don’t want this guy going forward in the Classics.

#9 Moonstone S— has the kind of form coming in that makes you shake your head. That being said, he is trained by the defending Trainer of the Year in Marcus Melander.

#10 Brookview Bolt— is 10-for-11 on the board but post position compromised. Can geldings sweep the male Trotting Crowns? (Amigo Volo favored in the Sophomore Crown)

#1 Continualou— lit up the board in a record Crown effort at 92-1. The barn that has sent out the quickest ever male and female freshmen has an up and comer here.

#2 J K AlwaysBalady— is one of two daughters of 2014 HOY J K Shes A Lady in the Crown this weekend. First crop sire Always B Miki positioned for a potential first out of the box sweep.

#3 Caviart Audrey— is a daughter of the sensational Darlins Delight, who somehow had the Crown elude her grasp. Excellent all-or-nothing season.

#4 Paulas Bet Hanover— is from Betting Line’s first crop-the rare stallion who did not participate in the Crown. His sire won this division — Bettors Delight ($14.70 in 2000).

#5 Scarlett Hanover— makes her 14th start-the most in the field. Quality all the way through.

#6 Blue Diamond Eyes —is my pick. Remember, Captaintreacherous went 1-2-3 in this division a year ago! Burke sitting on a huge evening.

#7 Fire Start Hanover— tries to keep the Midas Touch Year for the Pinske family going. Somebeachsomewhere is the most represented stallion in the Crown with 14.

#8 Nashville Elgenna— is the only Crown finalist whose dam won two Breeders Crowns — Androvette-2011-2012. Inexperience is her enemy.

#9 Notorious Pink— has REFLECT WITH ME written all over her. Can Tony do it again in this division? BIG chance.

#10 Somethingbeautiful— even money last out and fifth with the miscue. Usually a horse gets dismissed off of that moving to post 10. Restive Hanover won this in 2004 from this post.

#1 J K Going West— has already more than paid his way. Remember that sire J K EndOfanera was a chief nemesis of Always B Miki early on.

#2 Perfect Sting— just keeps on improving-and Joe Holloway has twice won this division with record setters — Badlands Hanover in 1998 and Jennas Beach Boy in 1994. Looks to go 10-for-10-bred for the part and gets George Segal and Marty Granoff in the winner’s circle together.

#3 Southwind Gendry— may have the best form in Breeders Crown history and not be the favorite. Gotta love everything about this youngster.

#5 Bayfield Beach is bred by the Somebeachsomewhere group-and Brian Brown’s Downbytheseaside was a major force at 2 and 3. Trace Tetrick looking for his second male Breeders Crown (Freaky Feet Pete-2015)

#7 Abuckabett Hanover— was 20 cents on the dollar and 89-1 within three starts. Metro fave. Metro winners took two of the first three Breeders Crowns — in 1988 Totally Ruthless and Artsplace in 1990 —then a 15-year gap until Jeremes Jet in 2005. Needs some help in here.

#8 Caviart Lotus— is a maiden and that doesn’t parlay into Crown glory. Huge year for the Caviart Farms.

#9 Captains Place— remember Captaintreacherous was gunned down by Rockin Amadeus in 2012 in this very Crown division. Can his son atone? Unlikely.

#10 Literl Lad Hanover— one of 16 Hanover Shoe Farm breds in the Crown. Closed in :25.2 and remember he starts from the second tier.