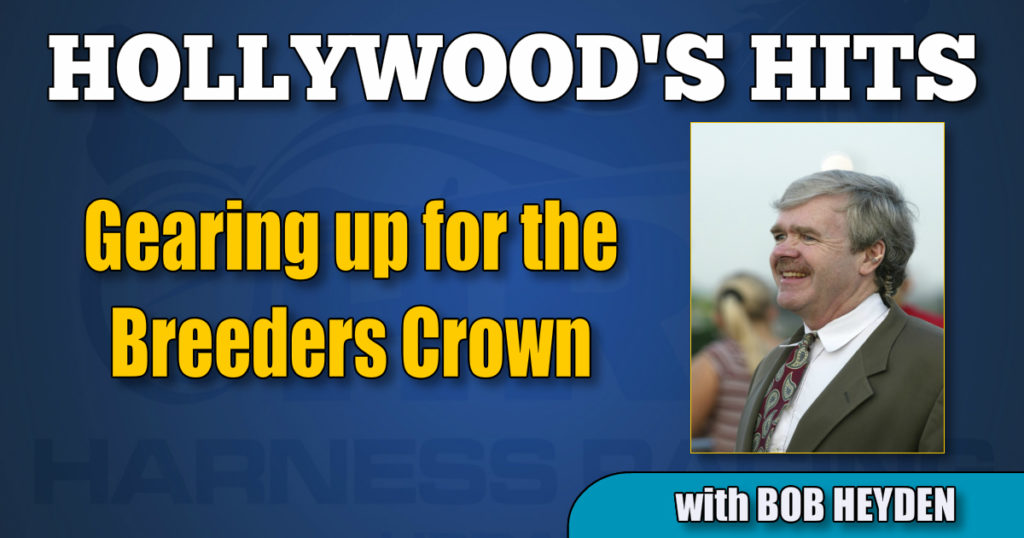 Gearing up for the Breeders Crown

Trainer Chris Ryder, who enters the Breeders Crown with unbeaten Party Girl Hill has had a number of notable females in his career.

Too Much Trouble was one of the first top pacing mares conditioned by Ryder.

Party Girl Hill is now 12-for-12 as she heads to Indiana for the Breeders Crown. The last two HOY honorees who were undefeated were also ladies — and they did so back to back — 2013 Bee A Magician and 2014 J K She’s A Lady.

Sticking his neck out

Party Girl Hill’s sire, Captaintreacherous, had a habit of sticking his neck out.

He had seven wins by a neck and was never second by a neck. Only once did he win by a nose, never by a head.

Tall Dark Stranger will make his 21st career start in either the elim or final of the Breeders Crown. Both Somebeachsomewhere and Muscle Hill started 21 times in their careers.

TDS’ sire Bettors Delight was a Breeders Crown winner at 2, but was fourth as the .65 cents on the dollar favorite in 2001 as a sophomore.

Tall Dark Stranger would be Nancy Takter’s second Horse of the Year if she wins it. In 2014, J K She’s A Lady won it.

Bettors Delight is the #1 money-winning sire in horse racing history. Can he get his very first HOY in 2020?

Whoever gets it — Tall Dark Stranger (Bettors Delight), Ramona Hill (Muscle Hill) or Party Girl Hill (Captaintreacherous) — it will be 21 years into the new millennium and the 21st different sire to have a HOY credit

Plus, Chapter Seven won the Kentucky Filly Futurity too with Love A Good Story.

When Amigo Volo crossed the wire easily taking the Kentucky Futurity, his record at 2 and 3 looked like mirror images:

Speaking of mirror images, his sire, Father Patrick, also sired the 2019 Kentucky Futurity winner Greenshoe. He becomes the first sire in the last half century to win the Futurity with his first two crops. Muscles Yankee did it in 2003 and 2005 with his first and third crop — Mr Muscleman and Strong Yankee. Father Patrick is the rare Three Year Old Trotting Colt Of The Year who himself did not win a Triple Crown event, yet both of his stablemates did — Trixton in the Hambletonian and Nuncio in the Yonkers Trot and Kentucky Futurity.

He was: second with E L Ideal, third with Third Shift, fifth with King Alphonse, seventh with Coventry Hall, eighth with Jula Trix Treasure, 10th with Gangster Hanover and 12th with Back Of The Neck.

The top three finishers in the 2020 Hambletonian all missed the board on Futurity Day — Ramona Hill, Ready For Moni and Back Of The Neck.