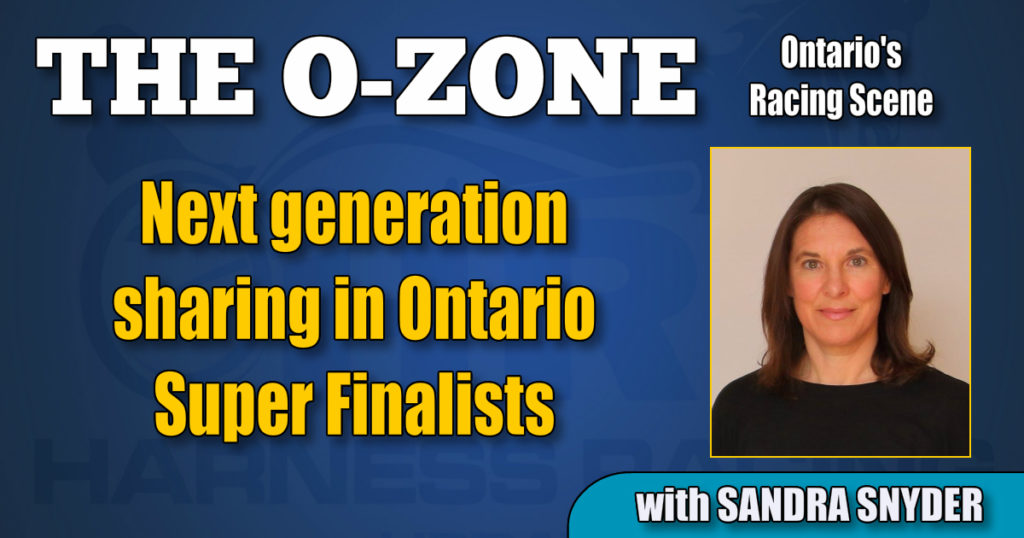 Thanks to plans to encourage the next generation of standardbred enthusiasts, young owners of talented Ontario Super Finalists Pemberton and Desperate Man have a major shot in Saturday’s $250,000 finals at Woodbine Mohawk Park.

Just before 10 p.m. on Saturday (Oct. 17) there will be an unusual buzz of activity in rural Tara, ON.

The flurry of activity stems from a plot hatched by Paul and Brenda Walker in 2016 when they decided to breed their unraced Muscle Mass–Our Day daughter Dayshifter to Wheeling N Dealin.

“Paul said, ‘Why don’t we let Christine have a piece of her because she has three kids and it would be a good way to get them interested in the racing, because they are dairy farmers,’” said Brenda Walker. “So we gave her a piece of the mare — and we didn’t know whether she’s going to get in foal or throw anything — and between Paul and I we picked Wheeling N Dealin, and to be honest a lot of it was because they were giving away free breedings if we signed up before the end of January. So that’s how Pemberton came about.”

Dayshifter’s first foal, Pemberton has been a standout on the Ontario Sires Stakes (OSS) circuit this summer and leads the 3-year-old trotting colts into Saturday’s $250,000 Super Final at Woodbine Mohawk Park where he gets Post 3 in the eighth race. The gelding went three-for-four in Gold Series action and also captured four overnight wins in nine starts. His Royalty For Life half-brother Harry made four appearances in the Gold Series this summer and logged a pair of third-place finishes, just missing the top 10 in the two-year-old trotting colt division.

And while the horses have been successful, the decision to involve daughter Christine Walker and her children Austin, 14, Kody, 12, and Amelia, 10, in Dayshifter and her progeny has paid off in far more important ways for the family.

“The kids, they’re on the computer to watch and now they’re getting a little superstitious. They have to watch in the milk house in front of the computer, they have to sit in the same seats while this horse is racing and the boys, especially the oldest boy, Austin, know who is in the race and who is the best one,” said Walker. “Amelia, the youngest one, she likes the horses and now that Pemberton made some money for them she actually got a large pony to ride, just a month ago.

“So it has worked, they’re quite interested in it and I know Austin is wanting to come with his mother to the races Saturday night. And of course, because they are watching they’ve got some of the neighbors watching. There’s a girlfriend of Christine’s, she’s got really excited about it, she’s watching Pemberton race and we gave her one of the sweaters that they win. So yeah, it is actually helping that way to create a little interest with some of their friends and family now.”

Last fall, Kathy and John Cecchin also made the decision to share one of their horses with daughter Nicole and son-in-law Paul Davies, offering the couple half of Shadow Play–Dreamlands Latte son Desperate Man as a wedding gift. That decision has also paid off in countless ways for the Arthur, ON residents.

“He has been, really a dream come true. Sharing it with them has been emotional, like I could cry,” said a choked-up Kathy Cecchin, who trains the colt. “It wouldn’t be the same, I don’t think, if it wasn’t all of us together.

“It’s been really great, and they have the baby and we have some funny pictures with him with the baby and that’s been very special,” said Cecchin about nine-month-old grandson Deacon. “He’s a sweetheart, loves the horses, just absolutely is crazy about the horses, so who knows how that will all pan out.”

Like Pemberton, Desperate Man leads the 2-year-old pacing colts into Saturday’s Super Final showdown, tallying three wins, one second and one third in his five starts, all in the Gold Series. Trevor Henry will steer both Pemberton and Desperate Man, who gets Post 9 in the fourth race, and Cecchin said the reinsman and his wife, Shannon, are like extended members of the family who have added to the enjoyment of campaigning the colt.

“Trevor and Shannon are stabled here and have been for I think going on nine years now,” said Cecchin. “John helps them, they help us. It’s a good relationship.”

Henry has even subjected Cecchin to some good-natured ribbing through the season as she dealt with the nerves and pressure of training and racing a horse she knew was special well before he ever set foot on the racetrack.

“I worry about him. Not the outcome, just about him, because the outcome is going to be whatever the outcome is going to be, it’s him,” said the trainer, who is hoping Nicole will be able to join her at Woodbine Mohawk Park on Saturday to help paddock the pacer. “I would always say (to Trevor), ‘Good luck’ or ‘safe trip’ or whatever, but the first time he raced at Mohawk I cried and I said, ‘Please just keep him safe.’”

Ashleigh Hensley said her strategy for dealing with the nerves is to keep busy in the paddock and not pay too much attention to the race. Her worry is two-fold as husband Ed Hensley drives most of their horses.

“I try to just keep busy and kind of watch the race as I’m getting the next horse ready, because sometimes I can get a little excited,” said Hensley. “It’s different for us because we’re doing all the work with them all week and it means a lot to us when they go out and race good, and then when they don’t perform it’s disappointing because it’s us that did all the work. It’s just lots of ups and downs really.”

The youngsters are a bit of a departure for the couple, who typically own all of the horses in their small stable and like to keep the balance at half pacers and half trotters. The pacing trio were sent north from the Ron Burke stable in late June and will be heading back down south on Sunday morning.

“On Sunday they’re all going to Lexington,” said Hensley. “It will be a sad day, they’ve become part of our family here, part of our team, and they’ve done well and we’ve enjoyed having them.”

Hensley is grateful for the opportunity to train the youngsters, something she and Ed hope to do more of in future. They have two broodmares of their own, one pacer and one trotter, and hope to find a yearling or two that fit their budget this fall.

Cecchin and Walker are also grateful for the success they have enjoyed this season and look forward to sharing harness racing’s ups and downs with their families for years to come.
“We feel really very blessed that we got to race this year because there was a while there that I certainly didn’t think that it was written in stone that we were even going to get to race,” said Cecchin, who recently increased the size of her barn so Nicole and Paul can move their horses onto the farm. “I think that that part alone has been a gift.”

“It’s been a pretty good year for us and we’re happy, thankful for everything,” said Walker.

The $2 million Ontario Sires Stakes Super Finals go postward at Woodbine Mohawk Park on Saturday, Oct. 17. The eight $250,000 finals are slated for Races 1 through 4 and 6 through 9. Programs and a live stream are available on the racetrack’s website.