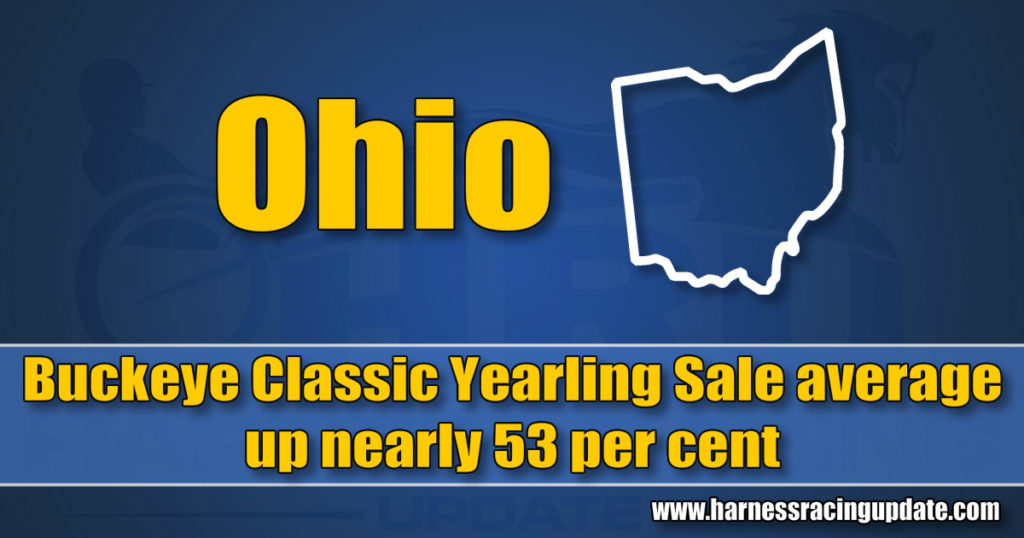 Hoosier Classic Sale Company, LLC held its annual Buckeye Classic Yearling Sale Tuesday (Oct. 13), with the event posting a near 53-per cent increase over the 2019 edition. Held at the Champions Center Expo in Springfield, OH, the sale offered a catalog of 212 yearlings, bolstered by a 15-horse Emerald Highlands Farm consignment featuring babies from the first crop of Fear The Dragon. Despite 17 outs, a group of 195 yearlings was sold for a gross of just over $2.5 million and an average of $12,904, up from $8,435 averaged last year.

“It was a strong sale,” said sale manager Steve Cross of the company’s sixth annual event. “There is a lot of excitement about the Ohio program. We saw that at the Friday session in Lexington, last month in Circleville, and today the first crop of Fear The Dragon was well received.”

Fear The Dragon topped the sale sheets, with progeny from the North America Cup and Adios winner garnering seven of the top eight bids, led by Fear My Britches, hammered down for $100,000. Cataloged as Hip 189 by Emerald Highlands, the colt is out of Soggy Britches and is a half-brother to Breeders Crown champion and Dan Patch Award winner Blazin Britches. Virgil Morgan Jr. purchased Fear My Britches acting as agent for Dana Parham.

The four top-selling yearlings came from the Emerald Highlands consignment. Following Fear My Britches at the top of the session was filly Fear The Britches as Hip 32. An embryo transfer and first foal from Blazin Britches, the Kentucky and Ohio eligible baby brought $80,000 early in the day, also purchased by Morgan as agent for Parham. Morgan also signed the slip on Hip 133, Fearless Moe, and this time as agent for Carl Howard and Enviro Stable. Out of Rocknroll Hanover mare Maureen Rocks, producer of three winners from four foals, the colt brought $55,000. Gazitarena, embryo transfer and first foal from Indiana Sires Stakes final winner Rockin Serena, was hammered down for $45,000. All told, 19 yearlings from the first crop of Fear The Dragon averaged just under $29,500.

“The whole year was experimental because of COVID. I’m in the newspaper business and the pandemic has just hurt my business terrible, so we’re not going to train as many,” said Bruce Trogdon, the man behind Emerald Highlands Farm and owner of Fear The Dragon. “We ended up selling a lot more than we usually do. This is the first crop of Fear The Dragon, we broke 13 yearlings, and every one of them is pacing free-legged on their videos. They really broke well. The colt that brought $100,000 is the most like Fear The Dragon of any horse I had. He reminded me of him, jogged like him. He’s really a nice horse.”

Longshot, cataloged as Hip 61, was the top selling trotter in Tuesday’s sale. Consigned by Perry Coblentz, the Long Tom colt is a sibling to three previous winners. His dam, Tintern, is a sister to Breeders Crown elimination winner No Pan No Gain, dam of double millionaire Crazy Wow. Wayne Mast Jr. signed the ticket for $39,000. A group of 16 yearlings sired by Long Tom passed through the ring Tuesday, bringing an average of just shy of $12,000.

A quartet from the first crop of highly-anticipated Downbytheseaside were consigned to the Buckeye Classic sale, averaging $20,000. Hip 72, Tin Cup Whiskey, fetched the top bid from the group, sold for $23,000. Consigned by Cool Winds Farm, the sister to 31-time winner McDazzle was purchased by Kirk Nichols.

Parham spent the most of any buyer, with Morgan signing four tickets for the Boca Raton resident. The purchases totaled $236,000. Four horses were sold online via Proxibid.