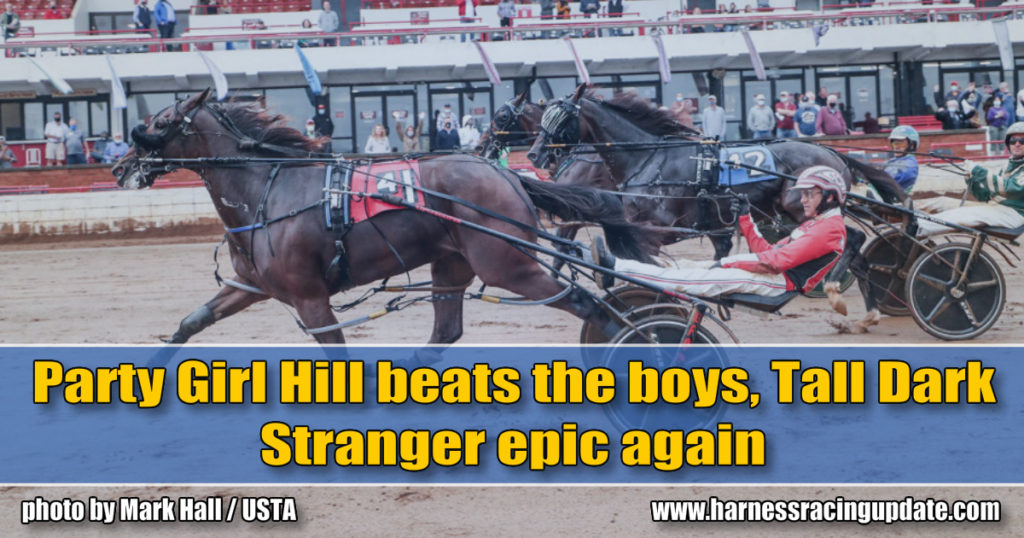 The two sophomore pacers both made strong arguments for the Horse of the Year title while winning their respective Tattersalls divisions in equal times of 1:47.2.

Pacing filly Party Girl Hill defeated the boys in the first of two $239,500 divisions of the Crawford Farms Tattersalls Pace on Sunday (Oct. 11) at Red Mile in 1:47.2 and then, two races later, Tall Dark Stranger equalled that mile in the other Tattersalls division.

Party Girl Hill trained by Chris Ryder and driven by Dexter Dunn for owner/breeder Tom Hill of the UK, remained perfect through 13 career starts with the victory.

“It’s a little surreal. What she does on the track is just what she is. She’s ridiculous, just phenomenal,” Ryder said. “Before we raced her we knew we had a very good horse, but to imagine she’d do what she’s doing is unbelievable.”

Ryder said the accomplishment of a pacing filly beating the boys at 3 was astonishing.

“I’ve waited 30 years since a filly beat the boys, so she’s comparable to (Little Brown Jug-winning filly) Fan Hanover,” Ryder said. “Who else would you compare her to?”

As for whether the victory elevates Party Girl Hill in the Horse of the Year race, the trainer said, “All we can do is race her and win. Really, that’s up to everybody else. I’m not a voter, I train the horse and that’s all I can do, but she should be right there. She’s unbeaten. The fillies don’t get the same accolades for some reason, but she might change that a little bit.”

“She’s awesome. She’s got such a long stride and I’m surprised when the half came so quick, because I didn’t feel like we’re going, but she just does it so easy,” Dunn said.

From there the Captaintreacherous—Look Cheap filly gained separation from her rivals, hitting three-quarters in 1:21. No Lou Zing and Capt Midnight began to roll into the stretch and cut into Party Girl Hill’s buffer, but Party Girl Hill kept the late foes at bay to win by a length. No Lou Zing finished second with Capt Midnight third and Save Me A Dance well behind in fourth.

“Today was the day because it was a mile and we didn’t have much to lose,” Ryder said after the race on his decision to move Party Girl Hill into open company. “Now we can go against the fillies in the Breeders Crown and just stay with the fillies. It was the last chance we had — we thought she could do it.”

“He’s just unbelievable. I think if it would’ve set up for him, he could have gone even faster. On a fast track today, I think he could’ve probably challenged Always B Miki’s record,” said Tall Dark Stranger’s trainer Nancy Takter. The Red Mile oval was rated “good” on Sunday after morning showers.

“He just gets the job done. I don’t know what to say. He’s a beautiful horse, he’s great-gaited, he’s gritty and he just wins.

“It’s actually a really nice group of 3-year-olds this year so obviously nothing’s going to be given to him for free.”

Cattlewash crossed to the lead from post 9 before the first turn while Tall Dark Stranger pushed towards the front passing a :27.1 opening quarter. Into the backside Tall Dark Stranger strode uncontested by a :54.1 half and maintained his speed to three-quarters in 1:21.1 as Warrawee Vital ranged first over from third. Warrawee Vital inched closer to Tall Dark Stranger in the stretch but began to bear inside while giving pursuit to the 3-5 favorite, settling for second while Catch The Fire shook loose from a pylon trip for third and Captain Kirk closed for fourth.

Gingras said he was a little disappointed the track was off. He would have liked Tall Dark Stranger to have had a shot at a world record on the Red Mile’s famed clay surface.

“It’s disappointing a little bit, but it is what it is. He’s got a 1:47.1 mark, which is pretty darn good and I know for sure that he could go :46, but he’s just not going to have that chance now,” Gingras said. “He was pacing as strong to the wire as any other point in the race. If I rolled him along at the half, he probably does it today anyway, but I’ve got to worry about winning races first more than records.”

Winning his 10th race from 11 starts this season and his 18th from 20 overall, Tall Dark Stranger has amassed $1,895,195 for owners Crawford Farms Racing, Marvin Katz, Caviart Farms and Howard Taylor. James Avritt, Sr. bred the $3.20 winner who sold for $330,000 at the 2018 Lexington Selected Yearling Sale.