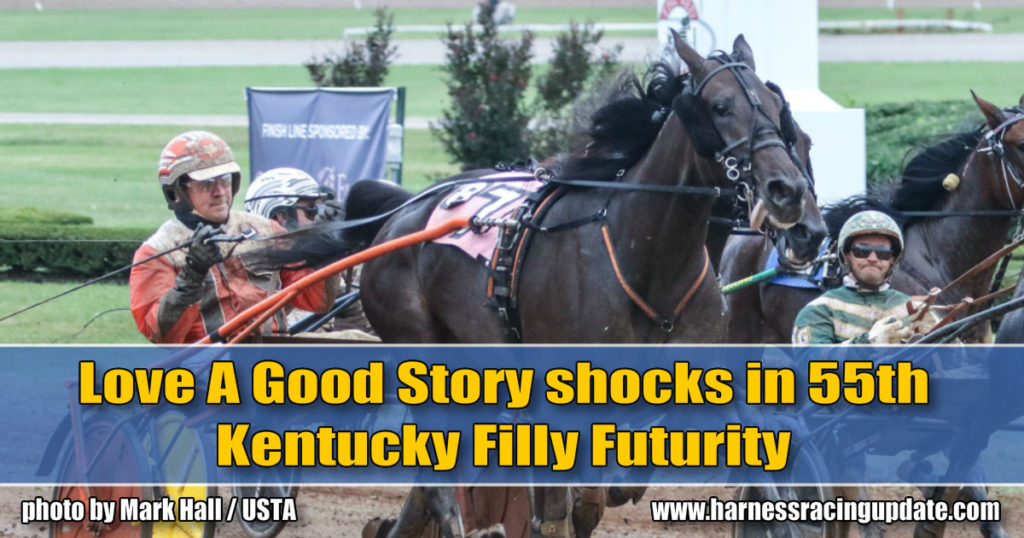 The trotting filly overcame traffic trouble to win the Filly Futurity at odds of 27-1 for Andy and Julie Miller, the Pinske family, Kentuckiana Racing Stable and Daniel Plouffe.

Love A Good Story survived first-turn traffic trouble and marched with the outer flow before uncorking a furious stretch drive to win in 1:51.2 in a tight finish over Hypnotic AM and Sorella, both finishing three-quarters of a length behind the winner. Next Level Stuff finished fourth.

Andy Miller said he thought the race was setting up well for Love A Good Story at the top of the stretch, “but I didn’t know how much finish a couple of the others had, but I knew (she) still had quite a bit of go.”

Carried three wide into the first turn, Love A Good Story eventually landed two wide to a :27 first quarter set by Panem. Hypnotic AM pushed from post 10 for the lead but yielded for the pocket as Sorella marched for the front up the backstretch. Once Sorella, cleared, 3-5 favorite Ramona Hill ranged uncovered towards the top but soon lost stride approaching a :54 half.

“When (Ramona Hill) made the break, it changed the whole outlook of the race,” Andy said.

Ramona Hill, trained by Tony Alagna, won the Hambletonian against the boys in August, but had a less-than-memorable fortnight in Lexington.

“That’s horse racing,” Alagna said. “Sometimes good, sometimes bad. I don’t know that she gets over this track as good as I’d like. Last year, even when she won, she wasn’t her best. But, we took a shot and it didn’t work out so we’ll regroup for the Breeders Crown.

The victory proved to be a special celebration for the Miller family and the Pinske family that have been friends for decades.

Andy said the Pinskes, “are great family friends. I knew Brian years ago and it’s just awesome (to win this with them).”

Pinkse said Love A Good Story is, “just a solid, solid filly. She’s overcome a few issues that she had down in Florida… to work through that and then go to New York and ship everywhere, she just shows up every week. She didn’t have good luck again in the (New York Sires Stakes) final, but bounced back here… Last week, she got away in the back and came home like mad and this week, to do the same thing again, I mean, she just shows her grit.”

The 55th Kentucky Filly Futurity was presented by the Father Patrick Syndicate and Diamond Creek Farm.