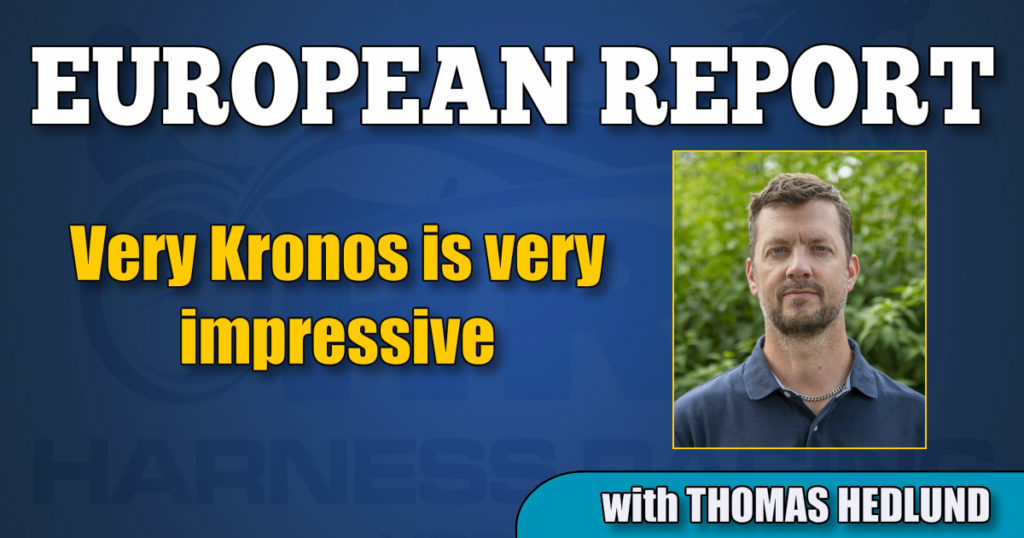 Six-year-old Ready Cash son Very Kronos (out of Yankee Glide mare Glide About) entered the $113,000 Swedish Championship for older trotters at Åby racetrack as one of the favorites on Saturday afternoon (Oct. 10). And the talented, but sometimes difficult trotter, showed why trainer Svante Båth always has expressed great words about Very Kronos.

Ahead of the Swedish Championship, Very Kronos had won 18 of 36 starts. Basically, he has won all races where he didn’t go off stride.

Saturday’s race was, so far, one of the toughest tests Very Kronos has faced and he solved it in impressive style.

Driver Erik Adielsson has been as patient as the trainer and the owner regarding finding the key to the Very Kronos riddle. During the last few months it seems like the horse has matured a lot, allowing Adielsson to send Very Kronos to the lead at an early stage in the 2,640 metre race at Åby.

Heavy rain made the track a bit sloppy just an hour before the race and the high pace in the race should have been too tough for most of the trotters over the distance. But Very Kronos defended himself bravely in the stretch when runner up Milliondollarrhyme attacked on open stretch after a pocket trip and when bronze medalist Cyber Lane made his move three wide in the last turn. Adielsson just concentrated on keeping Very Kronos in the right gait, which never was a problem this day, and when the Ready Cash son reached the wire, the time showed that Very Kronos grabbed the title in a world record performance: 1:55.2 over 1.6 miles.

“We’ve never really seen the bottom in this horse. He has either won his races or went off stride and now I hope that we can race more continuously, then I truly believe that he can race against and beat the best horses”, said Båth after the race.

Very Kronos, the horse with a great reputation, showed his potential and this was his big breakthrough in the elite races.

In the $113,000 Swedish Championship for mares, Timo Nurmos’ Hevin Boko (Going Kronos), paired with Mika Forss, also impressed a lot. Forss left third over with 1,400 meters remaining and aimed for the lead, where Björn Goop had placed Mellby Free after a quick start from post 8 behind the car. Goop’s tactics were clear, to use the open stretch since first choice Conrads Rödluva had to do the heavy job outside the leader during the last kilometer and Mellby Free got her shot even earlier than that. Conrads Rödluva was tired in the last turn, which opened up for Mellby Free and it seemed like Goop was heading towards the victory, but leader Hevin Boko fought strongly in front and held her opponents behind her in a mile rate of 1:56 over 1.3 miles.

Six-year-old Hevin Boko collected her biggest win in her 45th lifetime start and she reached $450,000 in earnings.