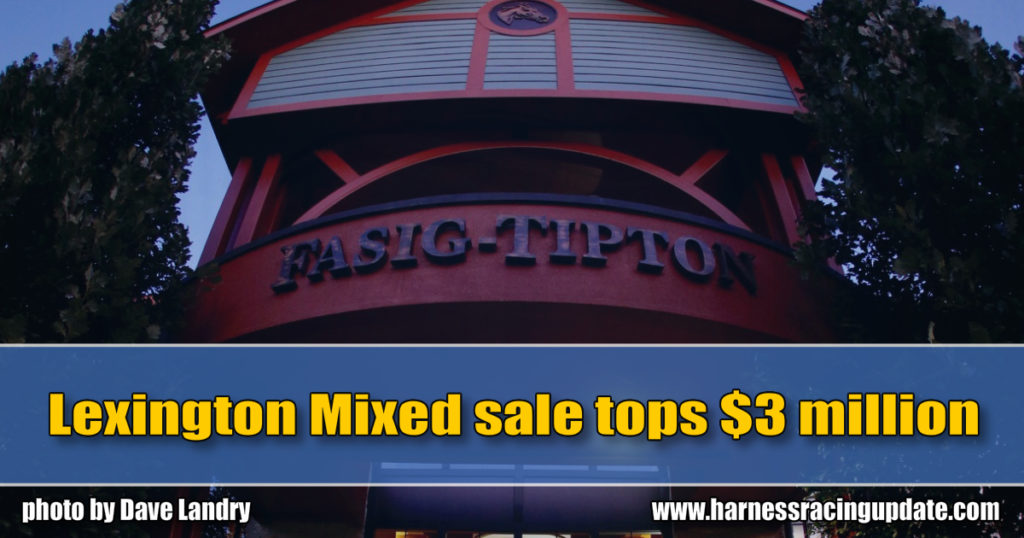 The most expensive horse to change hands was Creature Of Habit, a Donato Hanover filly out of Habit’s Best purchased by Cane Run Farm and Bluestone Farm for $350,000 from Diamond Creek.

The Lexington Selected Mixed Sale, held Saturday (Oct. 10) at the Fasig-Tipton sales pavilion, grossed $3,072,000 for 77 offerings. It was the second time a mixed sale has been held in Lexington.

Reid said the idea to try to have a mixed sale this year started with the pandemic.

“With all the uncertainty that was going on in the summer, we had the facility and we had the racing and it was suggested that we have a mixed sale,” Reid said. “The entries were a little slow and I think that was attributed to the uncertainty at the time. So, when the sales closed for both here and Harrisburg it was the beginning of September. You’ve got to remember that Yonkers was scheduled to close after the New York Sires Stakes Final and there was a lot of uncertainty about which racetracks were going to be open, so during that time there were a lot of dynamics going on.”

“We didn’t have that big of a catalogue, only 85 head or something, including stallion shares,” Reid said. “(But) the horses that were performing or producing on the top level sold fine. I think maybe the uncertainty of what’s going on is making some of the buyers adjust their plans as well, from the breeding point of view.

“Let’s get through the election, let’s get through Harrisburg, let’s get a vaccine and maybe make people come back to a little bit more normal life, because it’s draining on a lot of people. I think it takes a toll and I think it affects people’s decisions to manage their equine assets differently that they would have in the past.”

Hip #993 Marseille, a Muscle Hill colt out of Order By Wish, received the highest bid of $397,000, but was an RNA that will go back to Diamond Creek Farm.

The highest-priced offering that changed hands Saturday was Hip #981 Creature Of Habit, a 3-year-old daughter of Donato Hanover out of Habit’s Best purchased by Cane Run Farm and Bluestone Farm for $350,000 from Diamond Creek. Creature Of Habit has earned $94,810 on the track and has a mark of 1:54.2. She is a half-sister to $1.2 million-winning male Habitat.

“We sold (Creature Of Habit) as a yearling here for $130,000 and we’ve just been watching her race the whole time, like a daughter,” said Cane Run’s Elizabeth Caldwell. “The mare hasn’t had a filly since her. She’s had a colt this year and she’s barren for next year. We really liked this filly.

“Her family has been good to us and it’s just a family that we always liked. She’s a beautiful individual. She had some talent on the track. She was fast, but not the fastest.”

Caldwell said the plan is to breed Creature Of Habit.
“We don’t know who we’ll breed her to yet. We didn’t know we were going to get her. That was going to be my last bid.”

“We’ve been together since 2006. He has about 10 mares at Kentuckiana Farms, selling yearlings here,” Zuanetti said of Wilhite. “This year we had a pretty good year and so we were looking for broodmare prospects or broodmares in foal. We didn’t know if we’re going to go to Harrisburg or not so we looked to this and we found this mare (Blue With Envy) that we liked in foal to Greenshoe first crop and we just took a chance and bought her.

Doris Deo is in foal to Muscle Hill.

“(Doris Deo will) be exported. For her, she was a good-looking mare, toeing in maybe a little bit more than I’d like, but she’s in foal to Muscle Hill and we’re exporting her to Italy and there’s not too many Muscle Hills there, so that was the idea behind that and we were able to get her,” Zuanetti said, adding that he thought the mixed sale was “pretty good.

“Usually when the yearlings are selling good, then it trickles down to a good mixed sale. To me, for what we thought it was going to be four months ago, this is almost a dream.”

Reid said the sale company will continue to assess the viability of a mixed sale in Lexington.

“Maybe it’s too quick on the heels of (the Lexington yearling sale) and before Harrisburg,” he said. “We’re going to go back to the drawing board… You always want better results, but we’re not totally disappointed.”