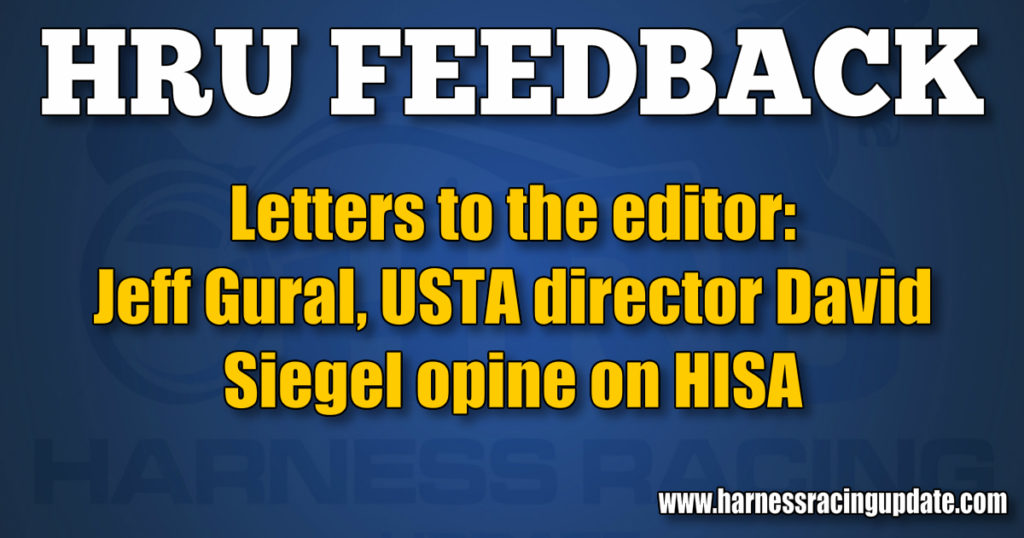 Gural: We need to sit down with the thoroughbreds over HISA

I don’t think there is any question that the thoroughbreds have taken control of the HISA (Horseracing Integrity and Safety Act) legislation. However, in my opinion the decision by the USTA not to participate with them and instead oppose the legislation is why we are in this unfortunate position. Having said that, I am 100 per cent certain that we could get the changes we require if we agree to sit down at the table after the legislation passes. There are few things that I know for certain that are not debatable:

At this point, we should see if the legislation is going to pass in the senate and if it does we should come up with a plan to sit down with the thoroughbreds and USADA and solve the problems that (USTA president) Russell (Williams) has raised. It is not rocket science; it is all solvable and we do have a problem.

There has been much publicity about the Horseracing Integrity and Safety Act of 2020 (HISA). As a United States Trotting Association (USTA) director and active participant in the racing side of the business as an owner and a driver, and also as an executive in a business that touches upon both Standardbred and Thoroughbred racing, I have paid close attention to the long-term efforts by both breed organizations to get uniform rules and uniform enforcement along with the creation of disincentives for participants to cheat.

In sum, all of these efforts have failed. Focusing on harness racing, my true passion, anyone who does not believe that the industry is experiencing rampant cheating is living in a dream world. Cheating occurs at a variety of levels, but I will focus on cheating that involves medication, which affects all facets of the business.

HISA has been passed by the House of Representatives in a unanimous (voice) vote, and it is extremely likely it will have a similar outcome in the Senate. No matter where we as harness racing supporters stand on the legislation, it is time to accept it, look at its potential benefits, and work hard to get as much representation as possible and as loud a voice as possible for our standardbreds. Recent letters by Russell Williams and Joe Faraldo, the USTA’s president and chairman, respectively, were not very cordial with regard to their thoroughbred counterparts. They threw some pretty sharp daggers, perhaps some deserved, but for sure not all. With regard to comments about coming to the table, I know first-hand that at least on one occasion, it was the USTA that put forth ultimatums in order to even sit down.

Nevertheless, all of that is water under the bridge at this point, as are the monies spent by the USTA to fight the bill. In business, we call these sunk costs and fretting whether or not it made sense to spend the money will bear no fruit. What makes sense is to look at life under the legislation and to extend an olive branch to its supporters and try to reap the benefits of the bill, even though it might fall short of a utopian situation for harness racing.

I personally know a number of the key figures involved. I have nothing but respect for the skills and intellect of Joe Faraldo and Russell Williams. I also know that Jim Gagliano (president and chief operating officer of The Jockey Club) is a very reasonable man. And while I don’t personally know Meadowlands racetrack owner Jeff Gural, I do believe that he is genuinely interested in bringing better integrity to our game. I also know with 100 per cent certainty that all four of these men have this in common – so things start with much common ground. And while the USTA clearly lost the “war” over the legislation, I do not believe that the supporters have any inclination to stick it to the USTA. In fact, I believe quite the contrary; they would support different rules for breeds that have profound differences in how they race. But to get to that point, the USTA must make the proper overtures to work together now within the confines of the legislation.

Medication (and other abuse-related) reform is badly needed in our game. Cheating abounds in harness racing, a great deal of that falling within the spectrum of medication abuse. Most state racing commissions have done a terrible job in weeding out cheaters and horse abusers. I base that on what I have seen with my own eyes and countless written accounts of cheaters being allowed to continue to participate. And the failure is not just at the level of the commissions, but also at the track level, where known paper trainers or “beards” abound and other violations take place, where asserting private property rights, even with due process, could be exercised to exorcise the problems. But most tracks choose to look the other way. This goes on at nearly every harness track in the country.

Therefore, I urge Russell Williams and Joe Faraldo to reconsider their position and lead the membership in a pivoted direction given likely enactment of this legislation. There is still time to sit down with the key supporters of the bill, before or after its passage and influence its direction with regard to standardbred racing. I further ask that they put aside any personal issues with others that may be on the opposite side of this debate and view this with the great practicality and professionalism that I know both are capable of, no matter how they might perceive various supporters to behave – in other words, take the highest road. I encourage them to rethink the cost-benefit of any further spending in opposition to the bill before or after its inevitable passage and embrace the possible positive outcomes the bill could mean for harness racing. Furthermore, I encourage them to do their best to exert whatever influence they might have so that our standardbreds can get the most favorable treatment possible if our breed ever becomes subject to this legislation.