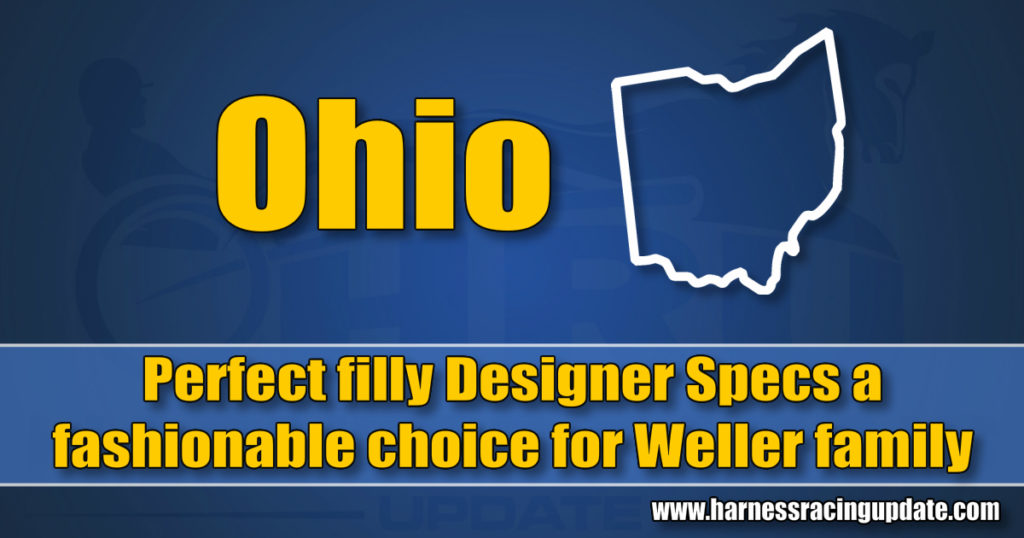 The 2-year-old trotting filly — undefeated in all 13 of her starts on the Ohio fair circuit — will go to the post in Saturday’s $40,000 Ohio Fairs Championship Final at Northfield Park as the second winningest horse in North America.

It was last autumn’s Buckeye Classic Yearling Sale when a trotting filly was led into the auction ring at the Springfield, OH venue. She was not what the Weller family was looking for.

Equine shopping on a budget, Jay Weller, his wife Louise, and Jay’s sister, Jayne, were frustrated after one after another of their catalog choices attracted bids out of their reach.

That filly, Designer Specs, has won all 13 of her freshman starts (and $36,664) on Ohio’s extensive county fair circuit this year and looks to cap a perfect season in Saturday’s $40,000 Ohio Fairs Championship Final at Northfield Park.

Brad Conrad | By the time Designer Specs got to the Delaware Country Fairgrounds, the Wellers put Ryan Stahl in the bike.

She’ll go to the post as the second winningest horse in North America, just one victory behind Lazy Day Hanover and First Gunner.

The Ohio Fairs Championship is a series of eight races, each with the same $40,000 purse, that celebrates the Buckeye States rich network of county fair racing

The reason the Wellers have a daughter of Full Count in the barn is because Weller’s wife kept raising her hand in the auctioneer’s direction despite her husband’s protest.

“He wouldn’t even have her if it wasn’t for his wife,” said Jayne. “Jay wanted to stop at $10,000. She kept saying, ‘bid, bid, bid.’ He said no, because it was a filly, but Louise kept going. There was no second-guessing on the way home. Jay is kind of quiet.”

The Wellers got Designer Specs for $13,000. Jayne said it’s the most her brother has ever paid for a horse at auction.

True to his nature, Jay has remained a man of few words during Designer Specs’ unbeaten run over 13 different racetracks.

“All he says when he gets out of the bike is, ‘Well, she won another one,’” said Jayne.

The Wellers are members of what is the first family of harness racing in Republic, OH, a village of just 549 in Seneca County in the northwest part of the state. Their mother, June, was horsewoman and a racing pioneer, the first and only female to compete in the Little Brown Jug.

June drove Dad’s Time in the 1972 Jug and was unplaced behind champion Strike Out.

June’s son and daughter were born and raised in Ohio and are shining examples of the grassroots tradition that is the harness racing lifestyle in the Midwest.

When asked if her brother would be available for this story, Jayne said, “He probably won’t be calling you back. We’re busy farming and training the horses.”

Jay, she said, was “hauling hay, today,” and that a typical day for them is to train in the morning and then farm in the afternoon, producing a crop of beans and wheat on the family’s nearly 200 acres of farmland.

“I’ve got the home farm (134 acres) and he’s about 1 ½ miles away from me on the other farm (45 acres),” said Jayne. “This has always been a family deal, because mom and dad raced horses. We race together, farm together, and pretty much live together.”

Jayne trains Designer Specs and Jay, until recently, has driven her.

“He got off and gave the mount to Ryan (Stahl) because we were going to Delaware (for a Jug Week start) and because we made the final at Northfield. My brother drives mostly at the fairs, not at the raceways. And Ryan also lives just down the road.”

Designer Specs began her career on June 24 with a half-length score at the Putnam County Fair in Ottawa. The result was more impressive than it looks on paper.

“She got run into behind the gate, right before the start,” said Jayne. “It turned her sideways and all but knocked Jay out of the bike. She came to a pert near stop and he got her going again. She must have made up 20 lengths.”

Designer Specs had another close call five days later, scoring by a head at Marion in an effort Jayne said was her “just learning how to win.”

She followed up with a comfortable score at Bucyrus on July 23 before enjoying home track advantage at the Seneca County Fair on July 28, drawing off to win by 8 ½ lengths.

“Nothing memorable there,” said Jayne. “Just her going about her business.”

Designer Specs got to trot over a finely groomed raceway surface when she went to the post at Northfield Park on July 31, home to the Summit County Fair.

She loved the experience, rallying to win by 2 ¾ lengths in a lifetime mark of 2:00.

“We knew she could trot, but we were surprised she went that fast,” said Jayne.

Designer Specs kept on rolling, posting victories at six additional fairs by a combined 26 lengths. But what came next was Secretariat-like. Racing under the lights at the Fulton County Fair in Wauseon, she powered away to win by 26 ¼ lengths.

“Some guy parked her to the quarter that night,” said Jayne. “But when you let go of her, she goes about her business. She loves to trot. The rest couldn’t go with her.”

Designer Specs registered her fastest mile in her most recent start at Delaware on Sept. 21, clocked in 1:58.3.

“We thought if she trotted back in two minutes, that would be good enough,” said Jayne.

She shrugs off any thoughts of pressure that comes with training an undefeated filly about to race for the biggest purse of her career.

“We don’t feel any of it ,” she said. “I’ve seen world champions get beat. If she gets beat, that’s horse racing. I’ve seen Bret Hanover and Niatross lose.”

“She’s done after this one,” said Jayne. “As for next year, maybe the Ohio Sires. It’s up to Jay.”

Or, could the Wellers’ phone ring with offers for Designer Specs?

“Nope, never had one,” said Jayne. “Nobody has called after she started winning. That way we don’t have to worry about selling her.”