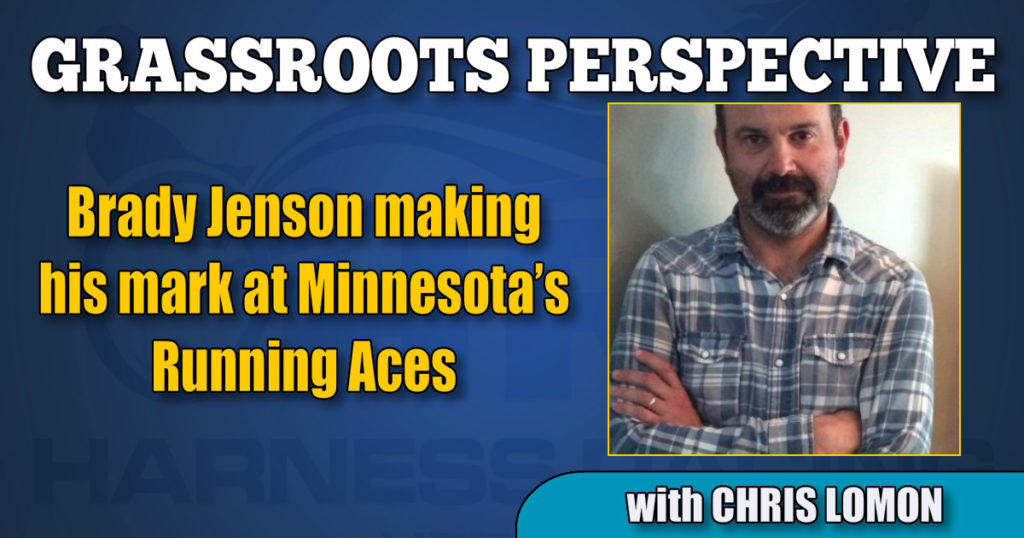 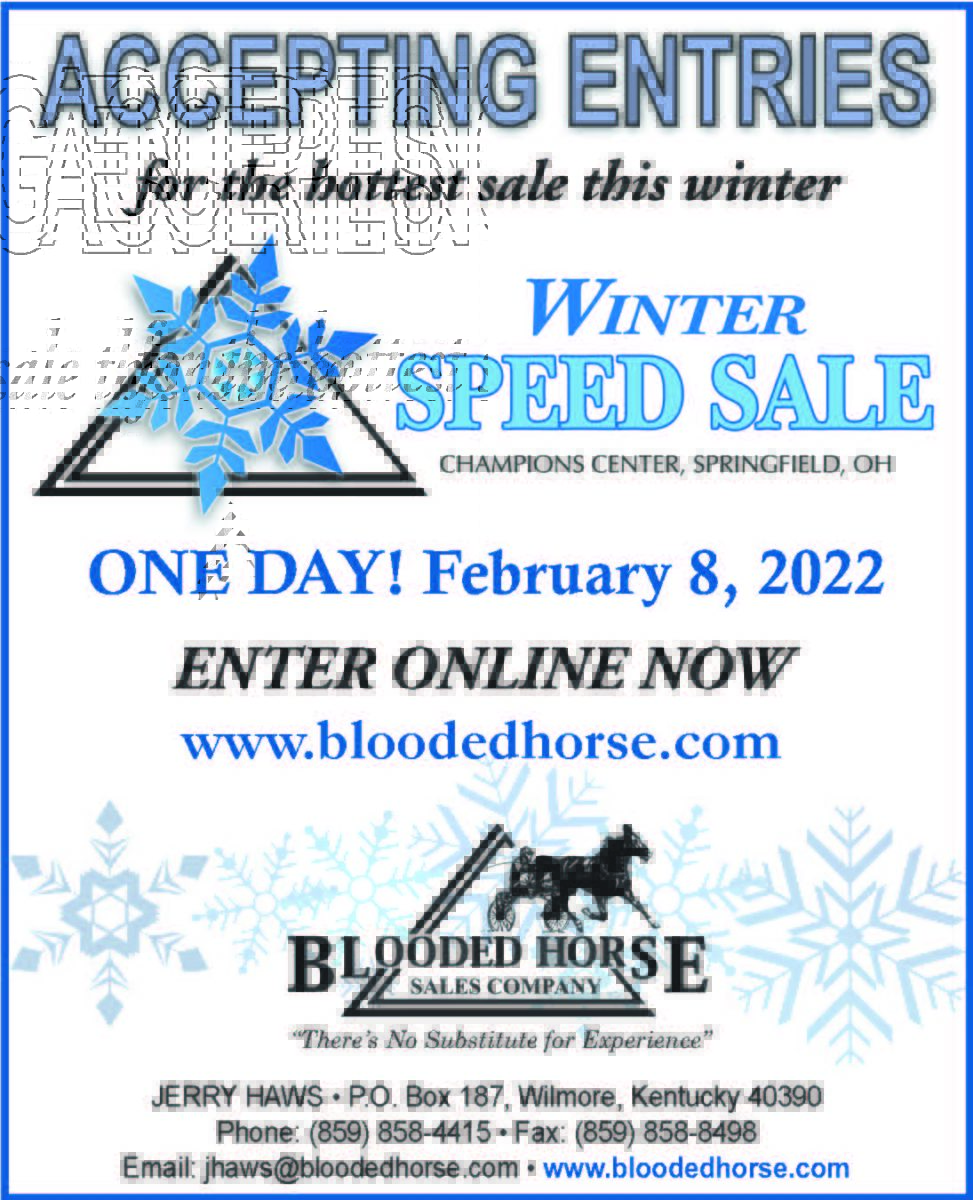 Brady Jenson can recall those moments, some of them vividly, when he was in the college classroom, meticulously studying his notes, jotting down names and dates. Throughout the semester, as the professor made his way through the lectures, students listened attentively, making sure they gathered all of the information they could ahead for upcoming tests and exams.

The young man from Iowa was also busy, albeit in a much different way from his contemporaries.

Although he can’t say with 100 per cent certainty, Jenson is pretty sure he was the only one looking at purchasing standardbreds during those classes.

Courtesy Brady Jenson | A deep love of horses made for an obvious career path for Brady Jenson.

“I went to DMACC, which is the Des Moines Area Community College in Iowa,” said Jenson, whose family has deep roots in horse racing. “I just went for a general degree. I had no idea what I wanted to do. I went with the hope of finding out what I wanted to do. I realized that when I was sitting in class every day, thinking about horses, and looking at onGait [a website dedicated to buying and selling horses] on my phone and computer. That gave me the sign that college wasn’t what I wanted to be doing. I wanted to be in racing.”

Jenson decided to take a year off from the collegiate life, an opportunity, as he saw it, to take time to ponder his future.

Ultimately, he felt compelled to head back to school and pursue a two-year degree.

That plan, however, took a turn when he stumbled upon an ad on Facebook during one of his classes.

“The first year after high school, I went straight to college. Then I did full of year of horse racing. That fall, I decided to go back to school and see about getting my two-year degree. Well, I dropped out that semester, my second year of college, after being away from it for a year. That winter, I went to Florida to work for [high profile trainer] Erv Miller.”

The Sunshine State experience finally provided Jenson with the clarity he’d been searching for.

He’s been in the horse racing industry ever since that sojourn to the southern U.S.

“That was a fun time, just seeing how the operation works, working with the babies and the 3-year-olds. I groomed six horses for Erv and at that time, I was 20. I learned a lot from being there. All it took was seeing that ad when I was in school, calling Erv the next day, and getting the job. I went to Florida around Christmas and came back when the stable moved back up north. I headed to Running Aces [a racetrack, hotel and casino, in Columbus, MN] and I’ve been in racing ever since.”

In 2015, Jenson drove in 95 races, winning five, along with 22 seconds and 19 thirds. He recorded five seconds and a pair of thirds in 23 training starts.

Although he went winless in the race bike the following year, he notched nine wins as a trainer.

It was in 2017 when he started to make headway and heads turn.

On July 2 of that year, the third generation horseman, then 21, piloted his own trainee, Mac Anover, to victory in a $3,500 maiden pace at Running Aces.

The triumph marked the first lifetime pari-mutuel win for both horse and reinsman. Although he had several training/driving scores on the fair circuit, this was a milestone moment he can recall as though it were yesterday.

“He was a McArdle and we bought the mare in-foal, and Mac Anover was the baby we got. He was training down his 3-year-old year when I was in Florida working for Erv. My brother, mother and father were training the horse down. He never raced as a 2-year-old and he was really well-bred. We thought he had potential, but he just wasn’t putting it together in the spring. It was disappointing. I came home and my brother and I started training him together with a horse I raced today [Sept. 30], Marktentwentyseven, who was bred by my brother Brandon and is owned by my Larry.

“Eventually, Mac Anover caught on. That first win, I drifted him out in the stretch and we won by almost two lengths. It was a great feeling. Everybody threw water buckets on me for that… one guy missed me and hit the horse with the water, and he almost got away from us. But he didn’t. That win was a big memory for me.”

Thankfully, it’s not the only one for the driver/trainer.

Another highlight came with a horse that had the odds stacked him, both literally and figuratively.

“I think the biggest highlight – I have to go back to Marktentwentyseven,” said Jenson, of the Minnesota-bred pacing son of Upfront Brad. “In his 3-year-old year, him and another horse of ours, Too Much Too Quick, they were an owner entry in a Minnesota-bred final [Sept. 16, 2017]. Nick Roland was driving Too Much Too Quick. We went off at 15-1, so we were longshots. Some of the favorites got in a battle up-front early. I was driving Marktentwentyseven. We weren’t picked to get any of it, but we tipped three-wide and four-wide at the top of the stretch, and I won it. Too Much Too Quick was second. I’ll never forget that race. My family owned both horses. That was probably the most meaningful race I’ll ever win. We won another championship that night too.”

At 24, there are still plenty of chances to add to his list of achievements.

Knowing that he’s found his calling in life makes the pursuit of those accomplishments much more enticing.

“Both of my parents’ parents were in the sport, and my parents met doing this. We all grew up – we always have 20-something horses in training – in the sport. It’s all I’ve ever known.”

When he’s not watching sports – he and his father are fans of the NFL’s Pittsburgh Steelers – or playing video games, Jenson, ironically enough, is still in the role of student, faithfully doing his homework, studying for hours each day, taking what he’s learned to earn top marks for his efforts.

“I love what I do. I wouldn’t change it for anything. Sometimes, it takes a little while to figure out what you want to do. That was the case for me. I’m grateful that I was able to find it. I knew I’d finally discover where I’d be the happiest.”