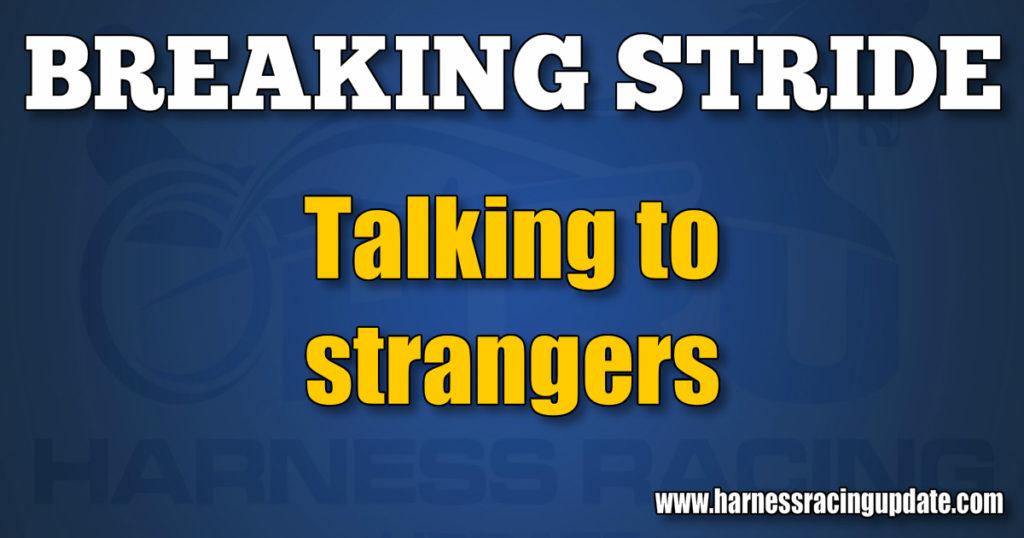 “Mistakes in the horse business.”

“Ah yes, my friend Trey does tend to get a bit over his skis, out of his lane, around the bend, over the line…”

“Alright, alright, I’m talking about mistakes that I make when I try to introduce people to the sport. I tend to push too hard, go to fast. It could be in a grocery store, at a class reunion, jury duty, meeting with a parole officer, a Star Trek convention. Any time I meet a stranger, my recruitment goes poorly, the person slips away as if they were face to face with a hyper maniac.”

Dripping with sarcasm, he said, “Another shocker.”

“I’m serious. After the normal dance, talking about names, taxes, the weather, employment, pandemics, and my reciting quotes from the Big Lebowski, at some point, the conversation lags.”

“Trey… with a conversation lag? The man with a plan for everything. The man who proposed funeral DJ’s, who invented an enclosed jog cart, suggested lottery dating, inflatable tombstones, the peanut butter and vodka fiet, and the blowtorch hand sanitizer.”

Ignoring him, I plowed ahead, “To jumpstart conversations, new acquaintances often turn to hobbies, which perks me up like a Pekingese on amphetamines I can’t help myself from trying to steer the new person into the harness racing game. At this point, it never goes well. Not a single convert.”

He smiled and said, “Did you ever hear the old saying, to say the right thing at the right time, keep silent most of the time.”

“Well, that ain’t happening. I got a lot to say.”
He kept up with the quotes, “He is not a fool who knows whence to hold his tongue.”

I snorted and said, “How will anyone understand how witty I am if hold my tongue?”

“Silence be eloquent and wit.”

I smiled and waved a balled fist, “You shalt be slappethed upsideth thou head if thou keepth talking like Shakespeare.”

He continued, “HOW you speak is just as important as what you say. Give me a sample of a typical conversation where you are introducing a new person to the sport.”

“Okay. A person might ask me, ‘Any hobbies, Trey?’

“‘Standardbreds. Do you know what a standardbred is?’”

“Shaking their head, the person will say, ‘Not really, you could have said you race zigleflanger ponies.’”

“I reply, ‘That’s okay, I’ve been in the sport for a long time, and I’m not exactly sure what standardbred means. Let me Google it.’”

The standardbred, is a breed of horse developed in America more than 200 years ago, has a reputation for its abilities in a range of equestrian activities. Because of its fast movements and speed, the standardbred is used for upgrading other harness racing horses, including the French Trotter and Orlov Trotter. The standardbreds are said to resemble the English thoroughbred horses but have a longer body with heavier bones and flatter ribs.”

“The other person says, ‘Well, thank you, that clears everything up.’”

“‘Really? I was reading off my phone and not listening to myself.’”

“They smile, then frown, and ask, ‘“Are these the racehorses that keep dropping dead in California?’”

I stop my imaginary dialog, turn to David and say, “At this point, the eyes of the potential new fan will begin to glaze over. Our conversation is not going well, and I have yet to introduce sulky, pari-mutuel, second dam, or first over.”

David nods, “That’s bad. Very bad. You managed to be confusing, condescending, and defensive in a few short sentences.”

“Agreed, and I may be so enthusiastic I may be hyperventilating. I don’t have my typical suave adroitness.”

He gave a combination laugh/snort and said, “Why don’t you allow me to try a reboot of the original question with a more user-friendly reply.”

“Feel free, but no Shakespeare.”

He spoke with a gentle smile. David, do you have any hobbies?”

“Yes, I have a lot of fun racing horses.”
“What kind of horses?”

“You might know them as trotting horses. They are beautiful, large horses with small carts pulled behind the horse. The national organization is named the United States Trotting Association.”

“Like the ones that pull Cinderella’s coach or the Queen’s carriage in Masterpiece Theater. The horses that lift their knees up and down like they are walking on hot coals.”

“Exactly! The sport is a lot of fun.”

They say, “Like Amish buggies racing against each other. I love those buggies. I always want to jump in for a ride. That clip-clop of the feet on the road is relaxing.”

David said, “I agree. I love that clip-clop sound. Did you know it’s a historical sport that began back when people drove buggies instead of cars? Back in those days, most people had a horse in the barn to make their daily trips to Costco or Starbucks. Some people always wanted to brag that they owned the fastest horse in town. It grew into an organized sport. A century ago, this was the most popular sport in the world, trotting horses and races were front-page news.”

“No kidding, a blast from our past. And people bet money on who wins?”

“Sure, the horses are terrific, and so are the people involved. It’s a great way to meet a cross-section of interesting people.”

I gave him a mock round of applause, “A tremendous improvement. Simple, positive, fun, and you allowed the other person to take the reins of the conversation. Message received. My new approach for unsuspecting newbies on the streets of America will be slow and simple. I’m going to increase my listening and cut down on my talking. I’ll make a list of do’s and don’ts for future spontaneous conversations.”

I bent back fingers as I said,

“Do not attempt to explain the difference between a trotter and a pacer.

“Do not mention the term pacer.

“Do not use the word standardbred.

“Do not use the word sulky.

“Do not use the term qualifier.

“If the other person uses the term jockey, do not correct them.

“Do not use any numbers or refer to times of races.

“Create distance between the thoroughbred breed.

“Stress the durability, magnificence, and adaptability of the horses.

“Use humility and humor.”

David flashed me a thumbs up and said, “A much better plan than a funeral DJ.”