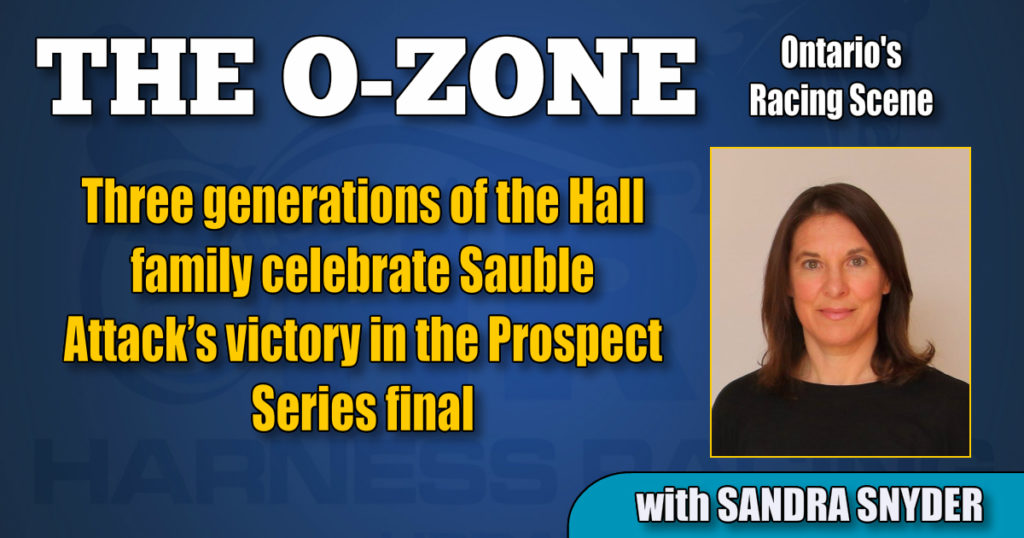 Larry and Marilyn Hall bred and raised the son of Bettors Delight and Ambrosia Seelster at their Sauble Hill farm in Tara, their son Otis Hall trained the gelding at his Ayr farm, and teenaged grandchildren Melanie and Scott are the pacer’s dedicated caretakers.

“Everybody is happy, my parents are happy, and my family is happy and the driver was happy with him, just everybody is happy, and the horse himself is happy. Just a good night all around,” said Otis Hall after the gelding’s 1:57.2 victory. “My two kids, Scott and Melanie, they have done basically all the work with him. I rarely touch the horse. Scott, he does all the work with him driving and training and what not, and I think they’ve done a great job with the horse.”

In seven career starts Sauble Attack has tallied three wins, one second and $17,790 in earnings, posting a personal best 1:56.4 at Kawartha Downs on Sept. 19.

“Ten or 15 years ago he would have been competitive in the Grassroots, but the Ontario Sires Stakes program is extremely tough. He tried the Grassroots and he just couldn’t quite compete, so the Prospect Series is a great series for horses that can’t do at the Gold level or Grassroots level,” said Otis. “He really does nothing wrong, he does everything we ask, I just wish there was another couple seconds there.”

Otis is hopeful that those seconds will develop over the winter as Sauble Attack grows and matures. In the meantime he will be busy with the gelding’s current stablemates, 4-year-old pacing mare Sauble Delightful (Bettors Delight–Performing Art) and 7-year-old pacing mare Docs Sausalito (Art Colony–Docs Lioness) and the four yearlings that will soon be heading his way.

“We’ve got four at the Mennonites to break and they’re going to his place afterwards,” said Larry Hall. “We just started doing this about three years ago, four years ago I guess, taking them to the Mennonites. We always broke our own, but I got old and I can’t do it.”

While the elder Hall has opted out of putting the young horses to harness, that did not stop him from doing extensive ground work with the yearlings before they left home.

“I led them pretty near all summer, just behind the tractor and the starting gate, a mile four times a week or something like that,” said Larry, who hung up his training colors for good in the fall of 2018. “I’ve had a good go at it and everything else, but it just got I can’t do it and I’m not going to get hurt.”

The Halls recently sold their farm and moved into town, but Larry said the horses — including broodmares Performing Art and Ambrosia Seelster, along with Ambrosia Seelster’s weanling Betterthancheddar colt Sauble Ace — will still be in residence for the next couple of years while he and Marilyn wind down their active involvement.

“We’re keeping the horses at the farm for a couple years anyways,” he said. “We go to the farm every day to play with them.”

“I would say recently he started winding down,” said Otis of his father. “He’s done it for most of his life, it was part-time for him for a good chunk, but I guess he was full-time farming and racing horses at the end there.”

With horses a constant during his childhood, Otis was always involved in their day-to-day care and training. As an adult, they are a hobby that he and his wife Susan have been able to scale to fit in with the demands of full-time careers and family life.

“I’ve got a farm down here near Ayr, just on the edge of town, and I’ve got 30 acres here with a track and training facility,” said Otis. “But we’re not consistent, like I had a break for three or four years there I didn’t race a horse. I was just busy with kids and sports and my career outside of the horse industry.”

As Scott and Melanie have grown older and expanded their skills and knowledge, balancing work and horses has become easier for Otis. And while their grandfather hopes the pair’s enthusiasm for Sauble Attack translates into long-term involvement in the business, their dad strikes a more cautious note.

“I can see them being somewhat involved, I don’t see them doing it full-time. They show some interest, but I mean we’re hands-on so it’s hard not to have interest when they’re around it all the time,” said Otis. “They’ll both end up in university somewhere, but they don’t know what their career path is going to be.

“It is a three generation business right now, but it’s just a hobby for us all.”

Looking ahead at his own operation, Otis said he plans to continue developing and racing the young horses his father has bred and sharing their hoped-for success with his family. He and a friend have discussed breeding a few mares of their own, but he knows the ebbs and flows of life could also change those plans.

“I have a lot of flexibility. I can just walk away and if I feel I want to get back in I can just get back in. I have all the equipment and I have the facility to do it, if I want to go get a horse I just go buy a yearling, or go buy a mare and breed a mare, or go buy a claimer,” he said. “It is a tremendous amount of work outside of a career. You’ve got to really love it, so it’s been a life commitment so far.”