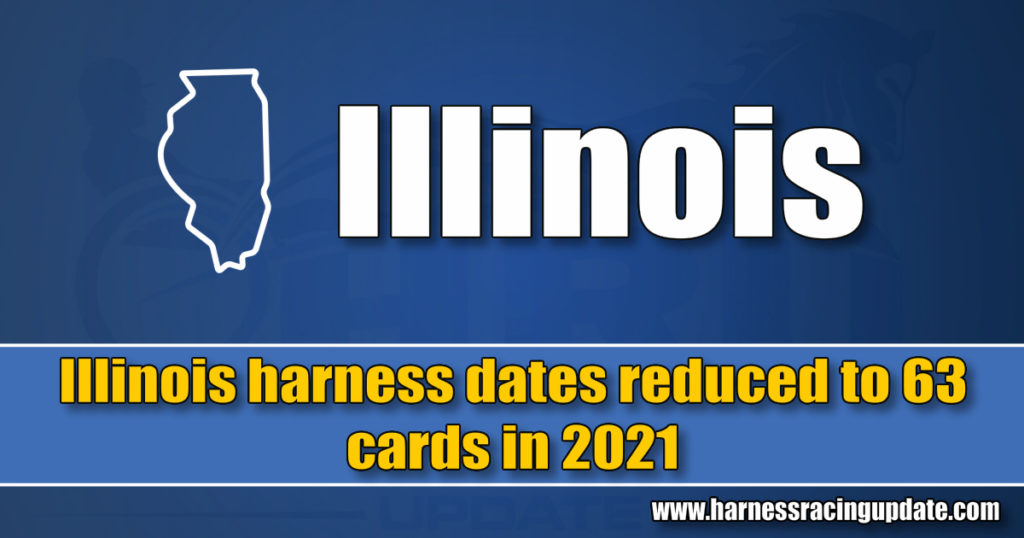 The dwindling of the harness dates at Hawthorne is attributable to the corresponding decline in the standardbred foal population following the closure of sister tracks Balmoral Park and Maywood Park at the end of 2015.

Anticipating that there will be no recurrence of this year’s 2 ½-month COVID-19 interruption and that construction progress will continue on the racino project, the Illinois Racing Board on Wednesday awarded Hawthorne Race Course 2021 harness and thoroughbred dates that mirror those the track raced from 2016 through 2019.

The 63-night harness meeting will be held from May 7-Sept. 26 and will be sandwiched between March 6-April 25 and Oct. 1-Dec. 31 thoroughbred meetings with a total of 50 programs.

Prior to the hearings, Hawthorne and Arlington International Racecourse reached a joint agreement on the schedule with the approval of the Illinois Harness Horsemen’s Association and the Illinois Thoroughbred Racing Association, enabling the Racing Board to rubber stamp the agreement that calls for Arlington to hold a 68-day thoroughbred meeting from April 30-Sept. 30.

This year, in order to expedite the daytime construction work on a racino that was made possible by Illinois legislation in 2019, Hawthorne didn’t request its customary winter/spring thoroughbred dates and was awarded a 92-night Feb. 16-Sept. 20 harness meeting.

But that meeting came to a sudden halt on March 15 because of the state’s COVID-19 emergency restrictions and 33 programs were lost before racing resumed without spectators on June 6.

The dwindling of the dates is attributable to the corresponding decline in the standardbred foal population following the closing of the sister tracks Balmoral Park and Maywood Park at the end of their 2015 meetings. From an all-time high of 2,535 foal registrations in 1983, the number plummeted to 144 in 2017.

According to Illinois Harness Horsemen’s Association executive director Tony Somone, trainers and drivers will adapt to the shrinkage of racing opportunities next year.
“They’ll do what they’ve been doing (since Balmoral and Maywood went out of business),” he said. “Some are breeders and they’ll care for their horses. Some have second jobs. Horsemen with better stables will go to Indiana until the end of November and will go back when racing resumes there in March. Quite a few will go to the new track in Kentucky, Oak Grove, from mid-October to mid-November (for a few days of weekend racing).”

Somone and Tim Carey, the president of family-owned Hawthorne, envision an Illinois racing renaissance after Hawthorne begins casino gambling in the building and a portion of the adjusted gross revenue is allocated to purses. The tentative timetable calls for the track to be racino ready by late 2021.

Another positive element for harness horsemen in the legislation is that it calls for a new harness track/casino to be located in any one of six south suburban Cook County townships.

Plans for the racino to be constructed in Tinley Park and begin racing this year in December fell through but Carey is engaged in efforts to find a partner or partners to pursue the venture and coordinate the track’s schedule with Hawthorne’s.

With that objective in mind, a 2021 application was submitted to the Racing Board on July 31 by Nick It Up, LLC — which had the same address as Hawthorne — for 22 nights of racing between Dec. 10 and Dec. 31.

At Wednesday’s dates hearings the board was asked to “defer” consideration of the application, which suggests it may resurface down the road.

“We’re still hopeful,” Somone said. “It’s our opinion the board can still award dates if it deems them to be in the best interest of Illinois racing. Tim wants to be a part of Nick It Up and hopefully he can line up a partner.”

Another facet of the 2019 racino legislation is legalization of sports betting in the state, and Hawthorne has partnered with PointsBet to launch mobile app, digital and on-site betting not only at the track but also at three of its off-track betting parlors in the Chicago suburbs. However, unlike the casino operation, horsemen won’t receive a financial windfall from the sports books that are tentatively to start taking bets on-site before the end of the month.

While Hawthorne resumed its current harness meeting immediately after receiving the green light from the state and local governments, Arlington delayed the May 1 scheduled start of its thoroughbred meeting until July 23.

The prolonged absence of Chicago metropolitan area pari-mutuel competition from Arlington and the delay in restarting professional baseball, hockey and basketball provided a huge boost to the all-source handle at Hawthorne.

“We’re up 31 per cent per-day over last year and 41 per cent since we reopened,” Hawthorne’s assistant general manager John Walsh told the Racing Board.

“People were seeing racing on their televisions, something they hadn’t seen in 20 years.”

In addition to its usual coverage on TVG and ADW that is ongoing, portions of Hawthorne programs were being show on MSNBC, NBC and FOX Sports during June and July.

Unlike Arlington, which resumed racing before a live audience limited to 300 spectators on Sept. 3, Hawthorne has had no spectators since its resumption of racing.

Jim Miller, Hawthorne’s director of publicity and horsemen’s relations, said the stringent ban will be lifted a little on Saturday night to allow licensed owners to watch their horses compete on the Night of Champions card of 11 stakes races that is the main event in Illinois harness racing. Hitherto, even owners were banned from the track.

“We also are looking at having a limited number of patrons on Sunday (the final night of the harness meeting) and during our fall thoroughbred meeting,” he said.

Like Hawthorne, the Illinois Department of Agriculture, which sponsors racing at the State Fairs in Springfield and DuQuoin and the county fairs, did some major damage control work after the COVID-19 onslaught.

“We’ve already had four days of county fair racing at Springfield, another is tentatively scheduled for (Thursday) Oct. 1. We’ll have our annual Fall Review there on (Saturday) Sept. 26, and we had one Tuesday at DuQuoin,” said Tim Norman, the department’s Bureau Chief for horse racing and county fairs.

“I don’t think we’d have had enough horses to fill all of the cards if we’d have raced at the county fairs, particularly at the end of July and early August when there would have been five, six or seven fairs overlapping. So it was kind of a blessing because this way all of the money that was appropriated for county fairs was able to go to the horsemen.

“We went by the county fair condition books (limiting the number of starters on the small tracks), and some days we had as many as 24 races. If something like this ever happens again we would go to State Fair conditions for the mile track so we could split at eight starters.”