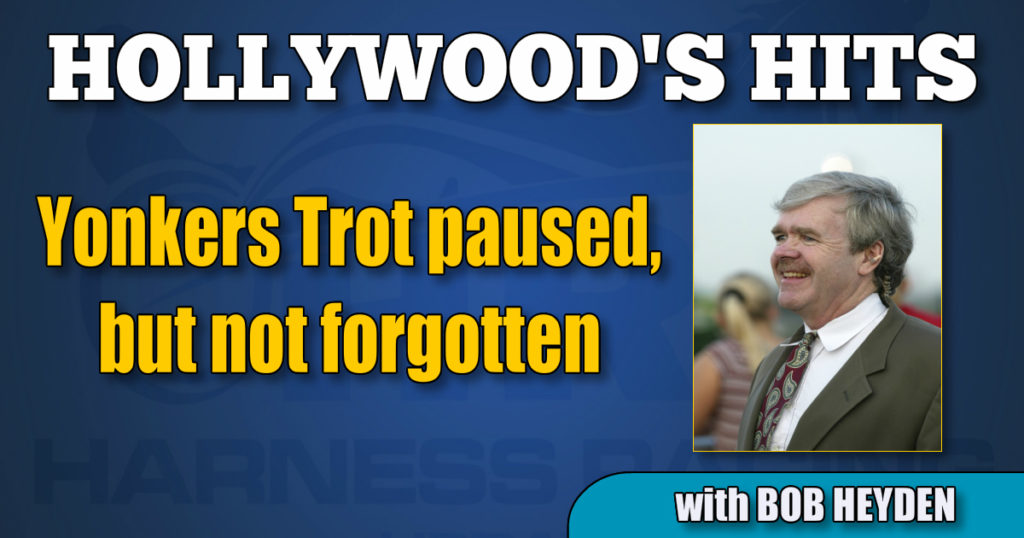 Yonkers Trot paused, but not forgotten

With the Yonkers Trot on pause for 2020, and hopefully not thereafter, let’s take a look at some notes for this third and final addition to the Trotting Triple Crown which began in 1955.

What is the richest race in North America where brothers finished 1-2? And it happened in back-to-back years.

Ulf and Jan Nordin first did it in the 1984 and 1985 Yonkers Trots. In 1984, it was Baltic Speed over Sandy Bowl, The following year, it was Master Willie over Mark Six. Both times, Jan Nordin was the winner. Their dad, Soren Nordin was the trainer of both.

When Stanley Dancer finished second in the 1990 Yonkers Trot with King Of The Sea to Royal Troubador, it marked the fifth decade that Stanley had driven in the Yonkers Trot.

American Winner won the 1993 Yonkers Trot by 10 and a half lengths-and then the Hambletonian by 2 and a half. Think he’d be the favorite going for the Triple Crown in the Kentucky Futurity? WRONG! Pine Chip won at 1-5 and American Winner failed to get money in the final at 8-5.

While there will be no Yonkers Trot in 2020, consider that the Kentucky Futurity took a four-year break during WW II 1942-1945.

In 2009, Judge Joe won the $670,774 Yonkers Trot for Jimmy Takter. He was purchased just before the race and became the only trotter in the last three decades to debut in a new barn and win a Triple Crown race in his first start. This has happened twice on the pacing end:
1991 Cane Pace — Silky Stallone for trainer Brett Pelling
2006 Messenger — Palone Ranger for trainer Greg Peck

Smedshammer wins 2 on the road

Trond Smedshammer has twice won the Yonkers Trot and they were coincidentally the same two years it was not held a Yonkers.
In 2004, Windsongs Legacy won at Hawthorne.
In 2005, Strong Yankee won at Freehold.
Yonkers was under construction both years. The slot hall opened in the fall of 2006.

Ladies won the Yonkers Trot back to back in 1995-1996 when C R Kay Suzie and Continentalvictory did so. Both were named HOY. When Suzie won it in 1995,she won by 7 and 1/2 lengths in 1:56. That time equaled the stakes record set by yet another outstanding lady — Peace Corps from 1989.

Ingrassia still the only one

Jacqueline Ingrassia went first over and won the 2000 Yonkers Trot with Goalfish. She is still the only female to win a Triple Crown event. The following year, Brooke Nickells drove in the Kentucky Futurity (Lavecster) and finished second in the first heat and third in the final, at 78-1 and then 23-1. If female drivers won and finished third in Triple Crown events in consecutive years, then why haven’t we seen them in any Triple Crown races since?