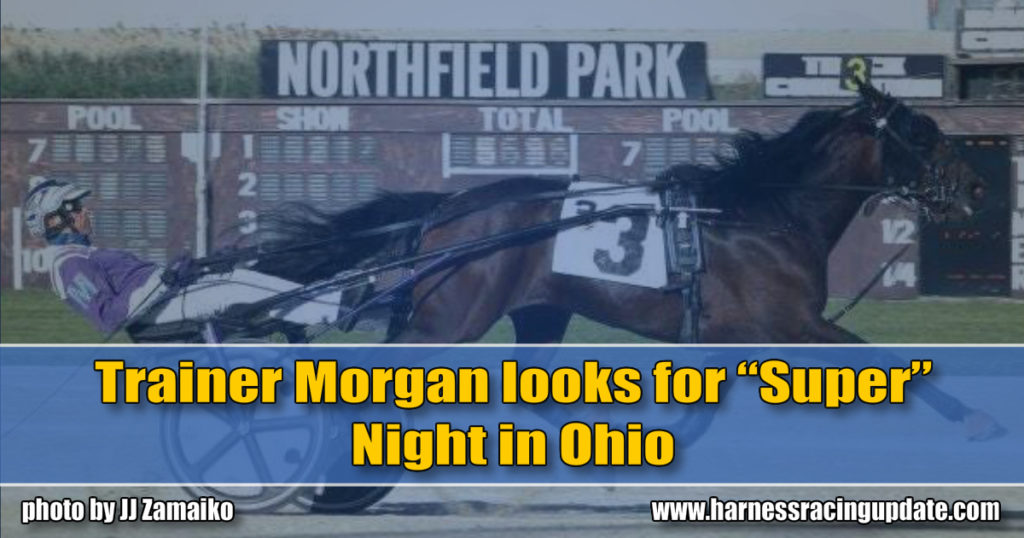 Trainer Virgil Morgan, Jr. knows his way to the Eldorado Scioto Downs winner’s circle. The Grove City, OH based conditioner, at the end of the current meet, will have won the training title at Scioto for a record 26 straight years. Thanks to a quartet of trotters, Morgan hopes to make several trips the winner’s circle during tonight’s (Sept. 6) Ohio’s Super Night featuring $300,000 Sire Stakes finals.

Action Uncle was installed as the even money favorite in the 3-year-old colt trot. The Uncle Peter colt swept the four preliminary legs and his only defeat this season came last weekend by a neck against older conditioned trotters.

“(Scioto) didn’t have any qualifiers scheduled. I wasn’t thrilled about racing him against aged horses, but he did fit the ‘non-winners of 10 pari-mutuels,’” Morgan said. “I went ahead and chose to race him. He got locked in and shot the rail and had a ton of trot left, so it worked out good.”

Action Uncle was owned by the Kenneth Sommer Trust in 2019 and was sold to Carl Howard, Joyce McClelland and Larry Wills for his sophomore season. Morgan trained both Action Uncle at 2 and his dam, Action Broadway ($1.1 million in career earnings).

In 2019, Action Uncle was an Ohio Triple Crown winner and set a new North American record for a freshman trotting colt on a half-mile track by winning a division of the Ohio Breeders Championship at the Delaware County Fair in 1:54.

He became a double world champion with his 1:53.2 mile on June 13 at MGM Northfield Park.

“After the first two (OHSS final) draws I was really frustrated. I got the nine hole (with Herculisa) and then got the eight hole (with Street Gossip). It actually came down to post #2 or post #9 with Action Uncle. I was like ‘no way I can get the nine here.’ Fortunately he drew the two hole. It worked out alright for him.”

The 8-5 morning line choice in the 2-year-old filly trot is the undefeated Herculisa.

The My MVP filly was a $5,000 yearling purchase for EG Trot and was purchased privately by Steven A. Finkelstein’s Jesmeral Stable after just one start – a 2:08.3 score at the Paulding County Fair.

“She qualified at Scioto once and she caught my eye,” said Morgan “She looked good. We purchased her after (a June 25qualifier at Northfield Park).”

Despite winning all four OHSS legs, Herculisa ran into some bad luck when she drew the outside post #9 for the rich final.

“She had the nine hole before here at Scioto and won in (1):56.1. Post nine is not what I wanted for her, but she can overcome it. She’s a real handy, classy filly. She actually loves to pass horses. In this situation, Brett (Miller) is going to have her on the gate and go forward the first eighth (of a mile) and look over and see how things shake out.”

Street Gossip, Morgan’s 2-year-old colt trot entry (7-2 in the morning line), joined the stable in July after a pair of solid efforts to start his career.

“He raced pretty good at Northfield (the July 3 opening OHSS leg) and finished third and we acquired him. He raced really good his first start (with us) and won in (1):57. He’s had a few throat issues and I think we’ve addressed that. Hopefully he will be peaking for this start.”

Street Gossip is owned by the partnership of Jesmeral Stable and Carl Howard. The Cash Hall colt has earned $69,714 in six seasonal starts.

With the Uncle Peter–Love Me Two Times lass, it is either feast (a win and a second) or famine (two breaks and last place finishes) in the four sire stakes legs.

“That’s it. She has a mind of her own. When she’s good, she’s real good. There is no in-between with her. The post draw (#2) couldn’t be better for her. Depending on who shows up mentally, she’s as good as anybody. When she won at Northfield in (1):54.2, she was vicious that night. She’s had a good week of prep and should be ready to go.”

Uncle Peter’s Love was purchased for $95,000 by Carl Howard and Joyce McClelland last August, right before the 2019 Ohio Sire Stakes Final at MGM Northfield Park, where she finished fifth.

All four of Morgan’s OHSS finalist will be driven by Brett Miller.

On the Ohio Super Night undercard, Morgan will send out a pair of older pacers in the two $100,000 #Senditin Invitationals. The William Haughton Memorial winner, Our Majordan A (Brett Miller) drew into the tougher of the two divisions and the outside post 9. As a result, the 1:47.3 pacer was tagged as a 15-1 morning line shot.

“That’s a little bazaar,” added Morgan. “That just shows you how competitive these races are.”

The Ohio Super Night card will offer total purses of nearly $2.8 million, an amount that was a pipe dream just a few years ago.

“It shows you how far things have come,” said Morgan. “It’s great for our track and our state.”

To accommodate the 17 race card, Eldorado Scioto Downs has moved the first post to 6:00 p.m.