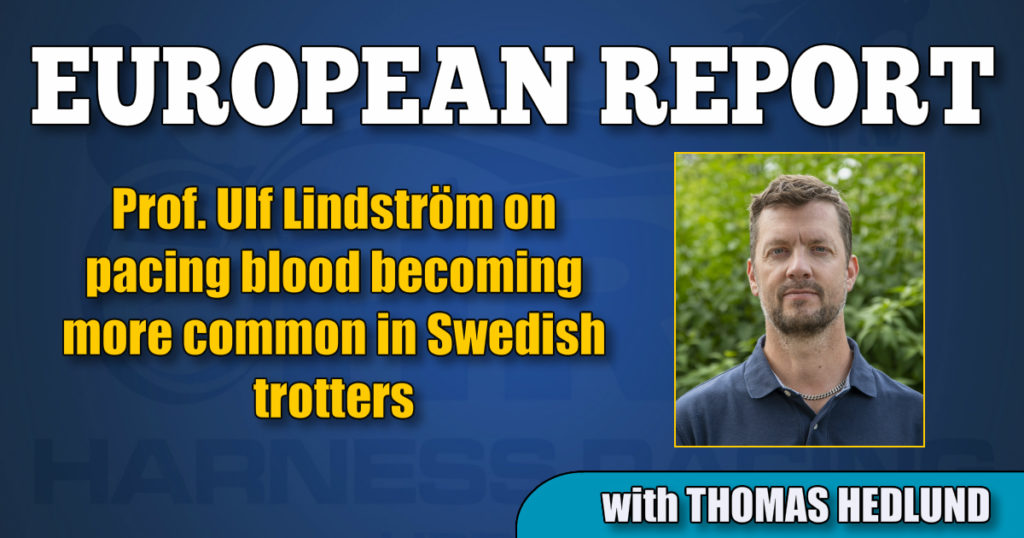 Pacers at the Gate (in Europe)

Thoughts from Prof. Ulf Lindström on pacing blood becoming more common in Swedish trotters, thanks, in part, to Googoo Gaagaa.

Today I turn the column over to Prof. Ulf Lindström, a professor emeritus of political science and a “desktop breeder” located near Stockholm.

Googoo Gaagaa with four and Kissed By The West with one son in Sunday’s Swedish Derby for 4-year-olds (over 2,640 metres) makes for a unique race in European trotting history. The fact that those five trotters in a field of 12 have pacing blood is not due to mishaps at the breeding stations, making it time to revisit conventional breeding wisdom.

Conventional breeding suggests “return to the sire the best blood of his dam” or else the no-brainer “breed the best to the best and hope for the best.”

Breeding guru Federico Tesio (1869-1954) begged to interject: “If there were no experimentation on the turf, nothing would have changed since Eclipse.”

Still, the American harness racing industry has its mantra, “You can make a pacer out of a trotter, but not the other way around.”

Be that his way, throwing trotting talent to the Pacific wind, legendary tycoons such as Leland Stanford persisted in breeding gaited mares to thoroughbreds. At his Palo Alto farm, some 700 head at peak stock, average sulky horses were produced until he bought Electioneer (b. 1868, for $12,000 in 1877). Shipped from the east coast on Stanford’s railroad, Electioneer was to add insult to injury, the Senator being of the opinion that “no gentleman drives a pacer.”

Electioneer, possibly the first railroaded sire, certainly was the first sire to railroad his owner, too.

The ending of the explorative years of breeding, the entrenchment of conventional thinking, came with the parting of trotters and pacers. Volomite (b. 1926) in and by himself was a fork in the road. His first offspring were born in 1930. Throughout his stud career, trotters and pacers were equally successful. Sweden honors his son Bulwark (b. 1933) as the founding sire of her sport. Volomite’s last crop was born 1951, to whom Phantom Lady bagged one heat in the Little Brown Jug.

A step back that became a leap forward in Swedish breeding was the acquisition by Menhammar Stud, in 1978, of Zoot Suit (Nevele Pride). Second in the Hambletonian, his dam, Glad Rags (Greentree Adios), was crossed 7+8+8/5+7+7 to Stanford’s Electioneer. Sire champion in Sweden 1991-1996, Zoot Suit’s crops include From Above, at 3 a winner of the Kriterium, at 4 the Derby, at 5 the Elitloppet and at 22 still active at stud. Zoot Suit was also a fortuitous choice for the otherwise checkered breeding program of actor Jarl Kulle, Kullehus Singing a rare act that (almost) brought down the house.

Recent Swedish experience of outcrosses – until 2019-2020, that is – defies regular statistics. The total population of individuals who’d qualify as hybrids is partly a matter of definition. Available data on pedigree – restricted to first generation or grandsire/granddam – suggest a remarkable record. Gisela Ås (damsire Cambest) won the 2013 Queen Silvia’s Trophy. Eketorpets Tess (damsire Dignitarian) finished second in European Championship for Mares in 2015. (Both Gr I Int’l races.) Peignoir (b. 2008, out of pacer dam) broke Swedish record time. She’s now the dam of, among a brood of five, Dandruff, a filly by From Above. Senator Stanford would be quite pleased.

A fair guess says the combined number of first and second-generation outcrosses entered in Swedish races over the last 10 years is less than 20. If pedigrees include three generations, Ourasine (b. 1991, by French Ourasi out of pacer motherline) 6 wins from 23 starts, is the dam of three SEK millionaires, among them Jocose.

Global Farm and the Kolgjini family were among the prominent players in the industry that, 68 years ago, took an active part in the importation of pacers to Sweden. For example, Beguile (Bettor’s Delight) is now the dam of three siblings by Joke Face: inbreeding coefficient 1.46. This, like similar initiatives, is a much appreciated check against infertility and hereditary disease in the stock. Somebeachsomewhere himself is now represented with four broodmares in Sweden. His granddaughters by Captaintreacherous are welcome too, not only for spelling bees among the turf writers.

Arvie Hanover (Somebeachsomewhere—Allamerican Apex) comfortably at trot for Erik Adielsson at Solvalla. She’s now the proud mother of a colt by Father Patrick.

If it’s a game-changing watershed we’re witnessing, it is too early to say. Four obstacles remain to negotiate before we rule on the impact in the trotting industry. First, the performance of crosses of pacers with the Franco-American bloodstock, an option available everywhere outside France. Notwithstanding renewed signs of curiosity for the Gallic trotter, the harness racing industry ofNorth America and Oceania is less likely than the Nordic market to ease up on breeding orthodoxy. Second, the anti-Tesio point heard in and from America, in addition to the recourse to money issues, is why experiment? The trotters are closing in on the speed of the pacers. Rather, look for pacer-frenchy-hybrids entering the tracks in the Nordic countries. Third, Googoo Gaagaa will be followed closely by the armchair breeders as his crops of 60-80 foals reach mature racing age.¹ So far no particular damsires or maternal lines stand out either way. Fourth, next season will see Hayden Hanover (5, Somebeachsomewhere—Hana Hanover, 1:47.3) at stud in Sweden.² Promising business prospects, the harness racing authorities are all the more grateful for the effect of offsetting inbreeding. The typical mating of pacing and Franco-American produces an individual whose coefficient is less than two per cent!

Horses themselves don’t flaunt their pedigrees as they enter the post parade. Blue-blooded or not they need to be developed, irrespective of gait, and get their act together.

Swedish trainer Per K Eriksson, three time Hambletonian winner in America (Prakas 1985, Giant Victory 1991 and Alf Palema 1992) hasn’t a lot of experience of inspecting the ”new race” in Sweden, but he can note that it takes a really good trainer to get these horses in the right gait.

“In my opinion, you need guys like Åke Svanstedt, Robert Bergh and other great trainers with the right touch for hybrid trotters. It’s a detail work to find the right rhythm and gait in a trotter with pacer blood and you have to be experienced to be successful. The trainers’ skills will most probably result in a faster horse with this kind of pedigree, but honestly, again in my opinion, I don’t know if we need so much more faster horses at the tracks. We are close to the breaking point of what horses can do on the tracks and the careers are getting shorter and shorter, due to the speed in races,” Eriksson said.

On a philosophical note, isn’t it a boon to the industry and sport if we can improve the bloodstock organically? That is, by our own faculty instead of relying too much on the faculties of genetics and veterinary medicine. After all, they are still to put their feet to where their number-crunching models and test tubes are, to breed, own, race and grab the purses of the most prestigious and highly doted races.