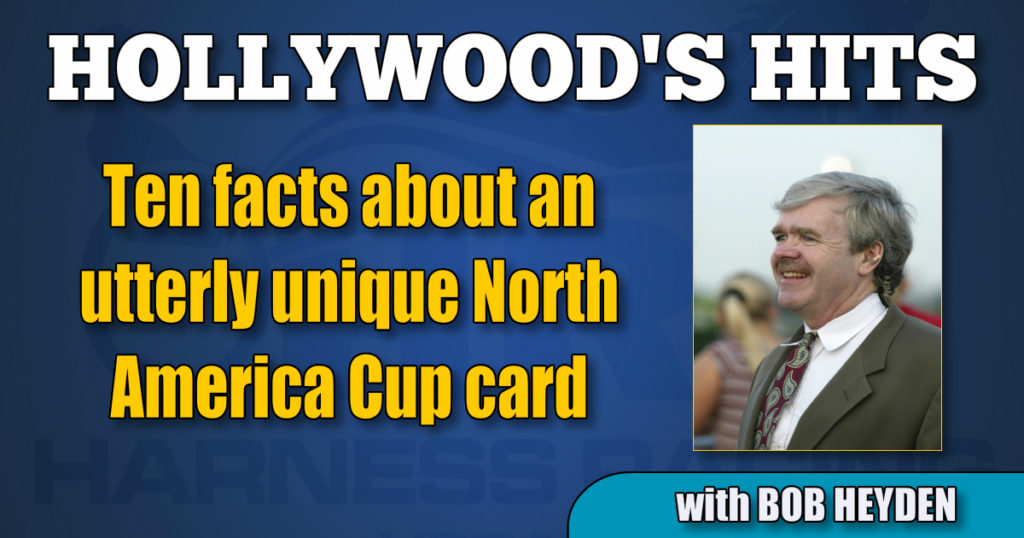 Here are some facts about the North America Cup card, many of which are unique to 2020:

1. Of the 118 horses scheduled to race on the entire card, 118 were scheduled to be driven by a driver born in Canada. Contrast that with 2020 Hambletonian Day, when 151 horses were listed to go — 108 driven by a someone born in the USA, 34 by Canadians, seven by Swedes, and one each born in New Zealand and Australia.

3. All three members of the active $200 million driving club are USA born — and none were at Woodbine Mohawk Park — David Miller ,Tim Tetrick and Brian Sears.

5. Cam Card Shark passed away this year. He was the oldest living HOY at age 29. He won the NA Cup in 1994 and was the first horse to complete the Meadowlands Pace-NA Cup daily double with the same driver — John Campbell. In 1991, Campbell and Jack Moiseyev shared the double with Precious Bunny, and again in 1993 it happened with Jack Moiseyev and Ron Waples — Ronny subbing for an ailing Jack (bad back) in the NA Cup with Presidential Ball.

6. Cams Card Shark sired the most represented sire on the entire 2020 NA Cup card — Bettors Delight, the 2001 NA Cup winner now 22 years of age. Included in there is Tall Dark Stranger among 18 Bettors Delights on the card. Captaintreacherous is next at 12 offspring on the NA Cup card.

7. Those were the days. In 2020, there was no New Jersey or New York breds in the NA Cup final. Long gone are the days of New Jersey stallion Cam Fella’s Precious Bunny (1991 NA Cup winner), 1992 NA Cup fave Carlsbad Cam, 1993 and 1994 winners Presidential Ball and Cams Card Shark winning both the Pace and NA CUP.

8. Fifty-six of 118 entrants on the card were driven on NA Cup night by a driver who did not drive him or her the week prior.

9. Fifty-seven of 110 pacers on the card were sired by a stallion who himself won the NA Cup.

10. It’s been 12 years since the NA Cup winner was also voted Horse of the Year. In 2008, Somebeachsomewhere earned that honor. His lone starter in the 2020 NA Cup was longshot Moneyman Hill.