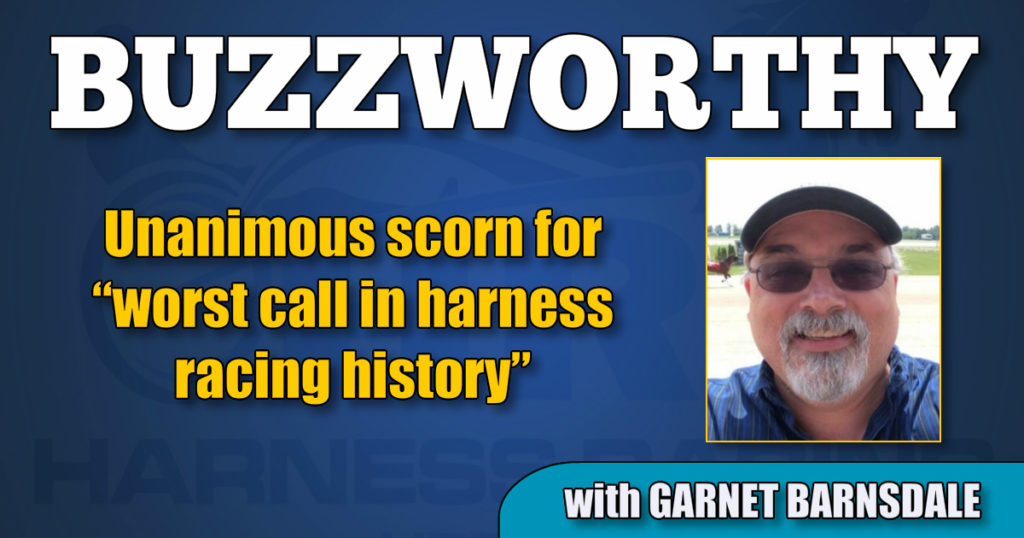 DQ in Race 11 on Sunday at Red Mile draws universal outrage on social media that only worsened after the presiding judge was quoted as saying it was an “easy call.”

Harness racing social media was buzzing on Sunday and beyond following a disqualification in Race 11 at the Red Mile — watch it here — that was unanimously hailed as a terrible call by Tweeters and Facebookers alike.

To set the scene, the $3,400 maiden trot race was won by 1-5 favorite Lindy’s Stardust who made a remarkable recovery after breaking just before the 3/4 pole when seemingly on her way to an easy win for driver David Miller. It appeared to all observers – except the judges – that the 3-year-old daughter of Trixton out of the Explosive Matter mare Struck By Lindy was correctly reined in by Miller to lose ground continuously until she got back down trotting. Several observers noted she was slowed to almost a walk before getting back on stride, straightening out, then surging past the three fillies that inherited position on her to claim a 1 1/2-length victory.

Here’s a sample of the outrage on social media:

Horseman Jay Hochstetler: “I’ve seen a lot of bad calls in harness racing but the DQ on David Miller in the 11th at Red Mile is by far the worst one in the history of horse racing.”

HRU columnist Brett Sturman: “I just watched the replay myself. Not only did lose ground but slowed down to almost a complete stop.”

DRF Harness editor Derick Giwner: “By the Judges definition of not losing ground, every horse that breaks at Red Mile must be DQ’ed for failure to lose ground… not sure you could lose more ground than that horse.”

Tweeter Steve Wing: “Before Dave got the horse going again, he was behind the horses that were racing, two others were miles back but they were still breaking. The DQ was the wrong decision, period!”

Horseman John Kopas: “Might be the worst call I’ve ever seen.”

Breeder/owner Art Zubrod: “Worst call in the history of sports.”

Horsewoman Ellie Sarama: “That has got to be one of the worst calls I’ve ever seen… and they have a judges license?? They better go back to judges school. Wow.”

Driver Yannick Gingras: “That’s a horrible call no doubt in my opinion.”

I’m sure by now, you understand the theme. The big question has to be how the judges came up with the decision to disqualify the filly who clearly lost ground until she was back down trotting. On Monday, Red Mile presiding judge Tim Schmitz told harnessracing.com that the disqualification was an “easy call.” “When she made the break, she didn’t lose ground quick enough,” Schmitz said. “We timed it and she stayed along side the other horse – B Lisa – for 8.3 seconds before she started to lose ground. She didn’t lose any ground to the trailing horses.”

This statement set off a new flurry of anger on social media.

Harness writer Ray Cotolo provided a clip of the part of the race where Lindy’s Stardust broke stride with a stopwatch embedded in the tweet that appeared to clearly show that ground loss started well before 8.3 seconds of her traveling alongside her rival had elapsed.

Blogger Dean Towers’ tweet included pictures of where Lindy’s Stardust was positioned when she broke and another that showed her in the middle of the track, about 8-10 lengths behind Lisa B when she was back down trotting and he added: “Here’s the horse when she broke just before the 3/4’s and here’s where she is when she gets back trotting. I am so amazed by this decision. Truly one for the ages.”

Horseman Nick Boyd wasn’t impressed with Schmitz’s reasoning. “Not shocking that guy is a judge,” Boyd tweeted. “That is the most certainly the worst answer he could have given.”

Zubrod similarly wasn’t buying it. “She lost at least 5 lengths in those 8 seconds, and then 10 more lengths,” he commented on his Facebook post.

Tweeter Mike Adams was blunter. “It was an easy decision. LOL That’s why it took 10 min to decide. That judge should be fired for gross incompetence. An awful decision and then trying to justify with more BS lies,” he posted.

It was also noted that this race was the heaviest-bet race of the meet so far with more than $85,000 put through the mutuels, which also attracted some commentary. “Sad to know it was the best bet race,” driver Tyler Sheen commented. “Many mad people I’m sure and (they have) a right to be.”

Bob Bresnahan opined that the judges’ decision would lead to lost business. “You can kiss those fans goodbye,” he posted.

Adding to the absurdity of the judges’ call is where she was placed. Lindy’s Stardust was placed 6th – thereby missing a check – behind a filly that was beaten 32 lengths and was in full retreat mode at the 3/4 pole where the break in stride occurred. So, was she supposed to keep losing ground after she got back on stride until she managed to trot slow enough to get behind this filly, then try to advance?

Here’s the thing about disqualifications and horse racing and this one in particular. In almost every case – see last year’s Breeders Crown DQ of Papi Rob Hanover, for example – the decision that is made by the judges is polarizing and you get some saying it was justified and often just as many arguing that it wasn’t. This disqualification produced 100 per cent solidarity of opinion in that every social media post and comment suggested that it was an egregiously bad decision.

So, can so many veteran horseman, journalists, bettors and fans be so wrong, and the one judge be correct that this was an “easy call”? Video evidence of the race would suggest only one guy got it wrong and it wasn’t a Tweeter.