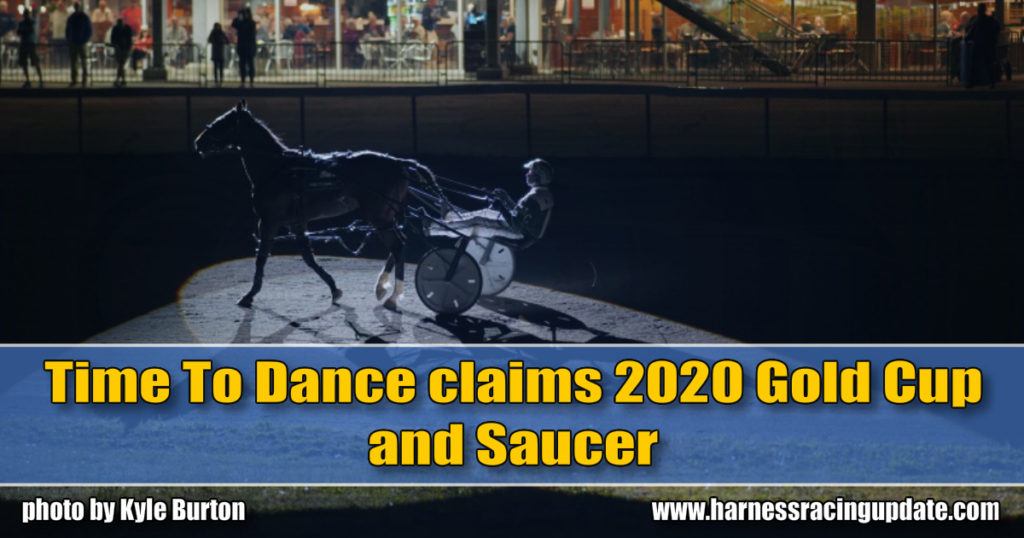 COVID-19 restrictions limited the race to Maritime-based connections as Marc Campbell claimed his third driving win in Charlottetown’s premier event and first as a trainer.

The 61st edition of The Guardian Gold Cup and Saucer had a different look long before the Cup Trials went behind the starting gate. Usually, Old Home Week is an occasion for thousands of racegoers to gather at PEI’s Red Shores Charlottetown Driving Park, with the big race getting underway late Saturday night. COVID-19 changed that, bringing about mandatory travel restrictions that meant the Gold Cup would revert to horses with Maritime-based owners, trainers and drivers.

The Charlottetown track’s signature event has drawn far-flung fields for decades. Only one Island-bred horse has ever won the Gold Cup and Saucer (Dr Walter C, in 1973). Jerry McCabe says Dunachton Gale (p, 6, 1:53.1; $177,016 US) was “the last Maritime-bred finalist with a legitimate chance to win it”; that was in the 2008 edition won by Pownal Bay Matt, which the PEI racing historian calls “the most competitive field” in the race’s six-decade history. “For a lot of years, that’s the way it was: One or two Maritime horses, who didn’t really have a chance in the open era, when the Native Borns and the Stouts started coming, and really since then.”

Even a Maritime circuit star who was not locally-bred, like Bramalea Road (p, 3, 1:52.2s; $329,266 US), did not pose a serious threat, observes McCabe. When racing for trainer/driver Doug MacGregor and the Maritimer Stable, the Abercrombie son finished second to Southwind Balsam in the 2002 Consolation, but could finish no better than seventh — twice — in the main event, both times behind double Gold Cup champion Sand Olls Dexter (2003 and 2004).

Proponents of restricting the Gold Cup and Saucer to Nova Scotia, New Brunswick, and PEI horses have voiced that wish for years. The late Canadian Hall of Fame racing journalist Doug Harkness advocated for it, although McCabe says, “My feeling is we have to have the best of the best, or it would not quite be the ‘Gold Cup experience’ in another 10 years.” Before the pandemic, that meant invitations extended to prominent owners and trainers from outside the region. This year, with an “Atlantic bubble” zone stringently limiting visitors from other parts of Canada and the United States, Red Shores opted to keep the Gold Cup and Saucer local, in order to offer it at all.

The result, while lacking the star power of some editions, has yielded stories like that of Friday night’s $20,000 (Can.) James “Roach” MacGregor Memorial Gold Cup Consolation: Avatar J and Gilles Barrieau overtaking sentimental favourite Yankee Osborne and Neil MacInnis in the stretch for the 1:52.4h victory. Avatar J (American Ideal—Arts Fantasy) is a 6-year-old stallion bred by Ohio’s Steiner Stock Farm, currently co-owned by Dean Larkin of Edwards, ON and Jody Sanderson of Cornwall, PEI, and trained by Daniel MacDonald. The win was the well-travelled pacer’s eighth win in 20 starts this year; the clocking, just shy of his 1:52.1h lifetime best, set at Yonkers. Avatar J encountered just one Maritime-bred in the Consolation — JJ Powerball (Image of Dawn x NY Lotto by Bettors Delight), who finished fourth.

Kent Oakes says he “takes great pride as an Islander” in Pownal Bay Matt’s 2008 Gold Cup and Saucer final win for Earl Smith. The veteran trainer/driver was honored with a trackside presentation Saturday night, celebrating Smith’s rare achievement of official driving wins now spanning seven decades. Is the focus on the local product beneficial, especially this highly-unusual year? “Absolutely. I can’t wait until the next Prince Edward Island, hopefully, or Maritime, horse wins the Gold Cup and Saucer,” Oakes told HRU. “I’m a big fan of having as many local horses in the race as possible. We absolutely appreciate all the people that come in, and we encourage everybody to come and participate in this great race. I think we have something very special here.”

It could have easily been otherwise. “We’re extremely fortunate that through the good work of the industry and Red Shores and the province working together, we were the first track to come back to stakes racing, and doing it safely, which is the main important thing,” continued the retired Standardbred Canada board member, who has looked after harness racing policy for the province of PEI for 32 years. He said he is hopeful that the usual welcoming of outside competitors and fans can resume in 2021, but “this year, in this environment, circumstances just didn’t permit it.” Even the racino’s Top of the Park dining room reduced the number of seats to 100, from the normal 250, as a pandemic precaution.

Five official Offsite Gold Cup and Saucer parties were held to give fans the experience that they couldn’t access at the track this year, plus a larger-than-usual number of unofficial ones. The Island Drive-In Festival even screened the big race at the Charlottetown Event Grounds after a local film called “Small Things. Great Love.” There was no Foiled Again at Old Home Week 2020, or even a chance for Rock Diamonds N to defend his 2019 title for trainer Heidi Gibb and driver Mitch Cushing. But an eight-horse final comprised of pacers with a rare opportunity to chase the region’s famed $60,000 invitational held its own appeal for both the limited 400-450-person audience allowed at the track (by advance reservation only, sold out long in advance), and for the thousands who will undoubtedly pack the venue again at the next approved chance.

On a super-fast surface where the overall track trotting record of 1:56.3h was equalled by New Brunswick-bred Mile Hill Willy (driven by Gilles Barrieau) in the $4,000 Colonel Dan Trot, expectations ran high on the pacing side. But the all-age pacing record at Red Shores CDP was indisputably safe: It was established in the 2016 Gold Cup final, when Rene Allard-trained Ys Lotus (p, 4, 1:49.3f; $420,633 US) and catch driver Louis-Philippe Roy scorched the oval in 1:50.1h. It was the first year that the Atlantic Provinces Harness Racing Commission (APHRC) permitted the use of Lasix. Ys Lotus received the medication before setting a 1:51.4h track record at Red Shores Summerside in its Governors’ Plate Invitational that year, opening up on local favourite DGs Camme for the six-length win that July 16 — the same win margin he would maintain over runner-up Go Daddy Go in the Gold Cup final.

When #2 Time To Dance (Marc Campbell) claimed the first-turn lead ahead of rail horse Lisburn (Ken Arsenault) the 4-year-old lived up to his name, accelerating to a “Boom! Just like that!” :26.2 opening quarter with that rival pocketing up behind him. When 3-5 betting fave #6 Casimir Ritchie P (Dale Spence Jr.) came calling first over, the aggressor ended up dangerously parked, followed second-over by #5 Woodmere Ideal Art (Dave Dowling) to the :54.1 half. Time To Dance shrugged off an “all-out third” Casimir Ritchie P in 1:23.3, who backed away before Lisburn pulled the pocket and Woodmere Ideal Art kept closing in the shadow of the wire. Campbell’s horse prevailed by one-third of a length over next-best 12-1 shot Lisburn and 23-1 longest shot Woodmere Ideal Art (third) in the perfectly-timed 1:51.4 new lifetime mark. Time To Dance was sent off at 2-1.

Brent Campbell of Charlottetown — who owns Time To Dance with Matthew McDonald of Edwards, ON — is related to the winning trainer/driver, “distantly, but on the MacDonald side”, he told HRU. “We’ve been friends since high school, at least.” When he set out to locate a “Saturday-night class, top class horse” to race in PEI, the Charlottetown resident noticed Time To Dance in a $15,000 claiming race at Flamboro Downs, and asked friend Robert Shepherd about the 4-year-old A Rocknroll Dance—Mystical Gypsy gelding, bred by Diamond Creek Farms of Pennsylvania. “He wasn’t really for sale, so we claimed him, and gave him to Mitch Tierney for a couple of starts up there [Ontario]. My other co-owner, Matt MacDonald, raced him a couple of times up in Ottawa, but the plan was to bring him home.”

Brent, who trains himself and helps Marc on race nights, took the week off his day job to assist on the backstretch and farm during Old Home Week. They refer to the newly-minted Gold Cup and Saucer champion as a “farm horse” at heart, who enjoys being turned out every day at the former farm of Dr. Ian Moore, and just trains a couple of days to get ready before a race. “He’s just not made to be at the racetrack.”

Crediting driver Campbell as “making a world of difference” in the final, Brent also praised his horse. “He’s just been a machine for the past two or three weeks,” he says, describing the young pacer’s rapid adaptation to the Maritimes’ Invitational-calibre competition. Time To Dance won his Aug. 15 Gold Cup Trial in 1:52.4, earning his ticket to the big dance. “We’re going to give him a couple of weeks off; I think the plan is to leave him here on PEI for the winter, and hopefully have a nice horse here for a couple more years.”

Handle was $184,274 for the 14-race card. From the winners’ circle, Marc Campbell puts things in perspective post-race: “Everybody’s in the same boat; everybody’s dealing with COVID. There’s still people who are pretty excited; these people [the winning owners] are pretty happy. People like seeing these other horses [from outside Atlantic Canada] come, no doubt they do, but maybe people that live here would go buy horses to compete in it again” if top local events became more regionally-focused. “I don’t know about Maritime-bred,” he clarified, adding that he knew the limited entries this year meant a more level playing field than in many recent editions. Time To Dance’s victory gives Campbell his third driving win in the coveted event, following up on his past success catch-driving trainer Ron Burke’s Escape the News (2013) and Take It Back Terry (2015). It was the Driver of the Decade’s first training win in the Gold Cup and Saucer, which he says may sink in more the next morning.