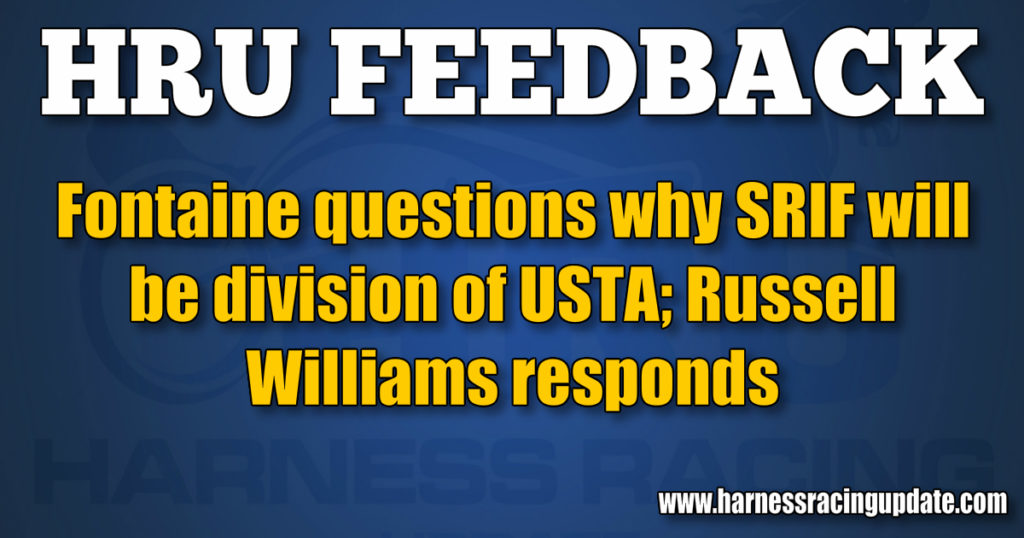 Fontaine questions why SRIF will be division of USTA

According to the Hoof Beats article, the SRIF will be a “division” of USTA. Despite hearing “from several industry stakeholders who were concerned about industry participants having the ability to exert influence on” investigations into our cheaters, are we nevertheless to be saddled with it being a “division” of USTA?

Also, USTA will announce who will be serving on the SRIF board. Does that mean someone from USTA leadership will be a board member, which begs the question: WHY? The “industry stakeholders” have already spoken loud and clear. They don’t want certain people “having the ability to exert influence” on investigations. In other words they don’t want someone in the USTA board leadership to impede their efforts. (Read who you will into this sentence).

Those who put up the money should choose their own controlling body and thereby be completely independent of USTA. It’s not enough to say, as the Hoof Beats article states, that investigative decision-making “will be removed from USTA.” Common sense would dictate that if a certain key member of this SRIF board came from USTA leadership, there will no doubt be input from that person negating the concept of complete independence. If such participation indeed occurs, why should our industry heavy hitters put large sums of money on the proverbial barrelhead and risk contamination of their independent efforts.

There are enough brilliant minds in this business with substantial resources to put this effort together without this process being a “division” of USTA.

This is taking a long time because of a myriad of independence issues, only one of which Mr. Fontaine has raised. This project requires a level of sophistication that we’ve never seen before.

In our original announcement in July, we did indicate that the SRIF will exist as a division of the USTA but with independent, third-party oversight.

At that time, my statement acknowledged the feedback received from important harness racing participants and emphasized that the structure of the SRIF will keep influence and decision-making completely separate from the USTA.

The following is my statement from the announcement of the SRIF:

“After announcing the $250,000 (Hanover Shoe Farms) challenge grant, we heard from several industry stakeholders who were concerned about industry participants having the ability to exert influence on or make decisions regarding investigations into possible regulatory or criminal abuses.

“These concerns are valid, so we have worked diligently with a leading Pennsylvania law firm to design a structure that would remove funding and investigative decision-making from the USTA and allow for total confidentiality.”

Once all of the details and logistics are complete, we believe that Mr. Fontaine as well as all industry participants will be very satisfied with the structure of and the oversight that will be provided by the SRIF.