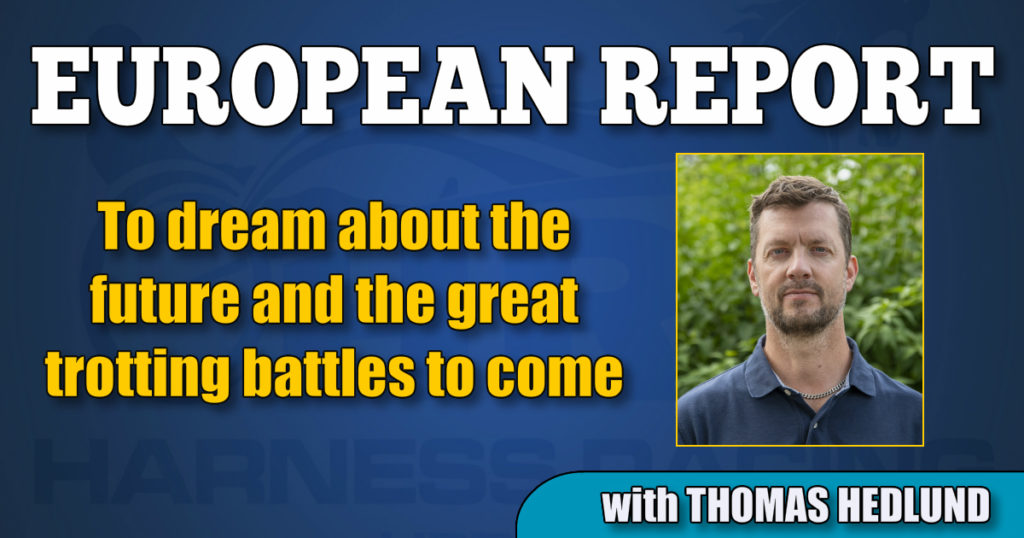 It’s easy not to think about the future in a year like this. Civilization has been turned upside down in 2020 and the harness racing business is no exception.

However, the horse industry seems to survive in Europe and one is allowed to dream about another season when things might be back as before when the public can find its way back to the tracks. With some really exciting trotters entering the tracks around the globe, fans already are looking forward to the big races in 2021.

Gimpanzee from the USA is definitely a horse that many people would like to see in some of the most prestigious races in Europe next year and trainer Marcus Melander and the horse’s owners haven’t closed any doors regarding a trip overseas. Face Time Bourbon is the natural choice when it comes to defending Europe’s flag in a battle with Gimpanzee, but we cannot set aside the fact that Jean-Michel Bazire’s Cleangame (who is a gelding and therefor excluded from the biggest races in France) is a horse to count on one more season.

On Wednesday afternoon, the 8-year-old Ouragan de Celland gelding played with his opponents in $129,000 Prix Jean-Luc Lagardere at Enghien in Paris, France. Cleangame came to the lead at an early stage in the 1.8 miles long race and just sprinted home in mile rate 1:59.4. This was Cleangame’s third victory in 2020.

Set for another E3 final

Two divisions of the $217,000 E3 will be held at Romme racetrack in Sweden on Saturday afternoon (Aug. 15) and this time it’s time for the shorter version in the series for 3-year-olds.

The E3 contested at 1.3 miles was held in the end of June and Global Badman claimed the division for colts and geldings while Barbro Kronos caught the win for the mares.

None of those two will enter the finals on Saturday’s race card at Romme and E3 king Svante Båth, who trains Barbro Kronos, misses the E3 final this time, which is unusual.

Courant Stable invests a lot in harness racing and the red and yellow colored jacket has been seen in winner’s circles on both sides of the Atlantic Ocean the past years and Courant will send out the favorite in both divisions of Saturday’s E3.

Hell Bent For Am (Muscle Hill) started his career in USA in Marcus Melander’s barn and made four starts in America ahead of the trip to Sweden, where Marcus’ uncle Stefan trains the horse. Hell Bent For Am won the final of $210,000 Breeders Cours at Solvalla in late May and qualified for E3 as third after a material mishap in the end of the elimination. From post 10, Hell Bent For Am will be the race’s first choice and even in the division for mares Courant Stable seems to be in favorite position since Hilarious Am (Cantab Hall) impressed in the eliminations.