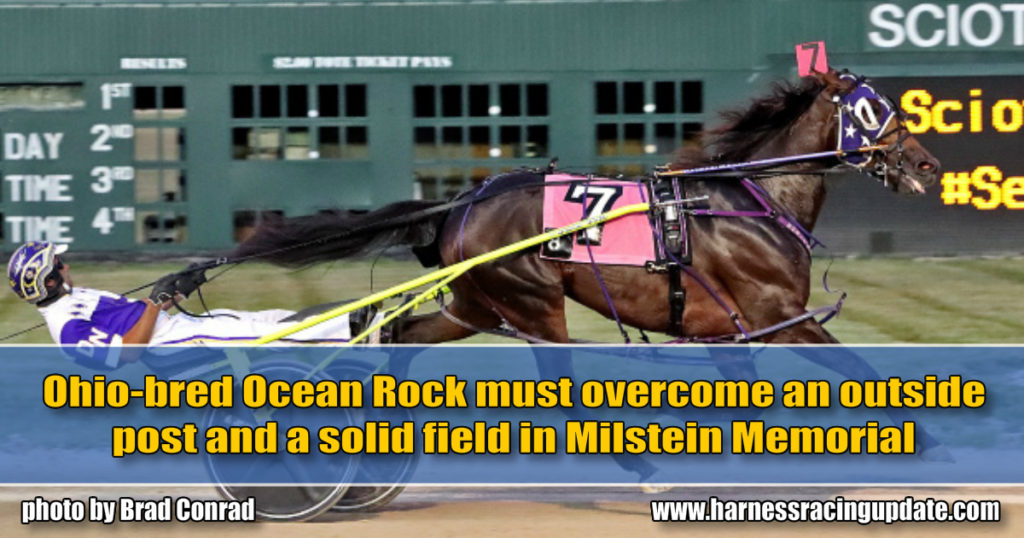 With opportunities limited on the national stage, Ocean Rock and the driver/trainer combo of Dan and Christi Noble were hoping for a little luck in the post-position draw. What they got was the outside post #8 and a much tougher assignment in Saturday’s $250,000 Carl Milstein Memorial at MGM Northfield Park.

“We were pretty disappointed,” said Christi. “Ocean Rock’s got gate speed, so hopefully we can use that to our advantage. A couple of times we raced him in overnights and both times we raced him off the pace and he came home in :27 and :27.2.”

“I’ll go off how he scores down and how he feels,” added Dan. “I’ll let him tell me whether to pull back or go forward. He has turned into a versatile horse. At two, it was his way or no way.”

Ocean Rock comes into the Milstein off a pair of impressive sub-1:50 miles.

On July 18, in the third leg of the Ohio Sires Stake (OHSS) for sophomore colt pacers, Ocean Rock was gunned from post seven and grabbed the early lead and cruised to a 7 ¾ length score over Elver Hanover, handing the world champion his first career defeat.

With not many chances to take on the continent’s best colts, the Nobles were looking for the chance for Ocean Rock to shine on a more national stage.

“His schedule is pretty set. He has the last leg of the sire stakes (Aug. 22) and then the final (Sept. 5) and the (Ohio) Breeders Championship at Delaware (Sept. 24),” noted Christi.

The connections discussed the possibility of supplementing into the Little Brown Jug, but the recently announced open supplement will not be available until 2022.

The homebred son of Rockin Amadeus has earned more than $285,000 for his owner Sandra S. Burnett of Wilmington, OH. Burnett is a long-time patron of the Noble family.

“She and her husband had horses with Dan’s father (Sam ‘Chip’ Noble) since he was 19 years old. When Dan and I started our stable, she gave us a couple of her homebreds and we have had some success for her,” said Christi.

Dan, who recently notched his 6,000th career win, broke and trained Ocean Rock as a 2-year-old and turned the training duties over to his wife at the start of the 3-year-old season.

Catch The Fire comes into the Milstein off a gutsy victory in the $375,000 Adios Pace Final on Aug. 1 in 1:49.3 over a sloppy Meadows surface. John Ackley trains the Captaintreacherous colt, who has earned $468,413 lifetime for the C T Stables LLC.

Odds On Osiris, the 2019 Indiana Sires Stake champion, has won eight of 13 lifetime starts and has earned $375,395 for owner Odds On Racing of Boca Raton, FL. Peter Wrenn will drive for his wife, trainer Melanie Wrenn.

The double world champion, Action Uncle (Brett Miller) looks to remain undefeated on the season in the second $50,000 division of the sophomore colt trot. Trained by Virgil Morgan, Jr., the son of Uncle Peter has a lifetime mark of 1:52.4f and a career bankroll $367,075 for owners Carl Howard, Joyce McClelland and Larry Wills.