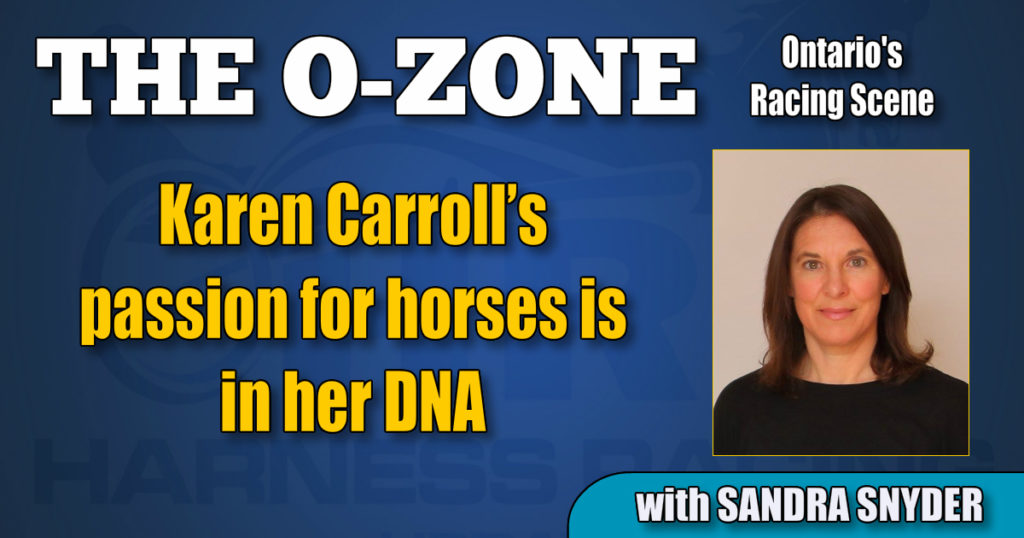 Karen Carroll’s passion for horses is in her DNA

The third-generation horseperson from Shedden, ON has gone from a trainer and driver to the breeder of high-quality standardbreds at her family’s Talbot Creek Farm.

Karen Carroll got her first pony at seven and has rarely been without a horse in the years since. Although she no longer does any driving and training, her Talbot Creek Farm is currently home to 17 broodmares and their offspring.

“My husband says, ‘Have you counted them lately?’” Carroll said with a laugh. “I know it’s a lot of work, but I guess when you enjoy it, they’re part of the family.”

It was her family that sparked Carroll’s interest in harness racing. Her grandfather, George Bennett, bred and raced standardbreds and was eventually followed into the business by her father Blake Bennett.

Triscari Video Web and Marketing | At the 2018 Standardbred Horse Sales Company’s Mixed Sale, Karen Carroll of Shedden, ON purchased Danish Girl, the half-sister to Gimpanzee, for $170,000.

“My grandpa passed away and my dad inherited the rest of what my grandpa had, and then he went out and bought Armbro Agile at the next Canadian Classic Sale, I think, and he turned out to be a great horse. That’s kind of when I ended up going to help more full-time was when dad had to leave to go to Sweden and I was kind of needed around the farm to look after the rest of the herd that was left at home,” recalled Carroll. Armbro Agile competed in the 1984 Elitlopp and Copenhagen Cup for Bennett and driver Trevor Ritchie, finishing out of the money in the former and second in the latter.

“I guess out of all the kids I was more involved with it. The others were busy with their own endeavours; some were milking cows and that sort of thing. I got to go to the races with dad and see that end of it and thought, ‘I enjoy it,’ and thought I’d take up training and driving.”

Both her father and grandfather focussed on trotters and as a trainer/driver that was also where Carroll concentrated. In a career that spanned three decades she would steer 142 winners to earnings just shy of $500,000 and serve as Ontario’s representative in the Women’s Driving Championship in Prince Edward Island. As a trainer she posted 43 wins and earnings of $227,505. Her last appearance as both a driver and trainer came at The Raceway at Western Fair District in October, 2015.

Carroll said the bulk of her success came between 1995 and 2000, when the first of her four children arrived. Soon after starting their family, the horsewoman and her veterinarian husband, Dr. Wayne Carroll, decided it made more sense to operate a breeding farm rather than a racing stable.

“Around 2002 or so we decided I’m going to have to cut back on the training and driving and get some other people to do the training for me, and we decided to do a little bit more of the breeding,” said Carroll. “You start out with what you have and what you know, and then try to improve it as you’re going along, and I guess that’s where we’re at now. You’ve got to change up your broodmare band and keep it current.”

One of the early horses that Carroll had someone else train for her was Luck Of Michelle, a 2005 yearling acquisition who had a tremendous freshman season, earning the 2006 O’Brien Award for 2-year-old pacing fillies, and going on to earnings of $907,709 before beginning her career as a broodmare. Carroll co-owned the daughter of Camluck and Michelles Destiny with Natalie Pentland and John Pentland trained the filly through her 3-year racing career.

“We’d buy yearling fillies that we thought we could train and would be decent race mares that we could keep as broodmares,” said Carroll. “And sometimes we’d buy racing stock, a 2- or 3-year-old that somebody’d put in the mixed sale and we thought we might be able to race her as a 4- or 5-year-old and then keep her as a broodmare, and that worked out a little bit for us, we had some luck with those.”

The economics of buying yearling fillies and racing stock caused Carroll to expand her focus beyond trotters. At the moment, Talbot
Creek is home to nine pacing and six trotting broodmares. Most of the early purchases spent some time on the racetrack, but recently the Carroll’s have shifted their focus to acquiring mares that are in foal or ready to breed.

“We bought Gimpanzee’s half-sister (Danish Girl) and she’s got a Muscle Mass filly this year, a yearling, and she’s got a gorgeous Father Patrick filly by her side and she’s back in foal to Greenshoe,” said Carroll, who offered up $170,000 for the Credit Winner mare at the 2018 Harrisburg Mixed Sale. “We’ve got a lot of mares this year that are maiden mares so it will be interesting next year in foaling season, to see what we have.”

To date, the most successful product of the Talbot Creek breeding program is $711,831 winner Backstreet Shadow. The 5-year-old son of Shadow Play and Backstreet Sweetie is currently a regular player in the open stake ranks for trainer Ron Burke.

This fall, the Carrolls will sell seven yearlings, keeping their fingers crossed that buyers will figure out how to navigate the online, telephone and in-person options available to them at each of the yearling sales.

“This year, obviously, is a little different for everyone, so I guess we’re all going to find out shortly how it’s going to work,” said the breeder. “It’s a little harder for smaller farms to entice someone to come out and view your stock when you’re only selling maybe seven or eight horses and other farms have 20. And it’ll be hard to have Ontario buyers go down to the States when they’ve got to quarantine for two weeks when they come back.”

Carroll said yearling videos — walking, conformation and trotting — are scheduled for the coming weeks with the goal of having them available for viewing by Sept. 1. Among the offerings she hopes will lure buyers to Shedden, ON are the first foals out of Danish Girl (a Muscle Mass filly) and pacing mare True Reflection (a Sunshine Beach colt), a Betting Line half-brother to Mankat and a strapping Muscle Mass filly out of Quantum Victoria.

In addition to their standardbred breeding operation, the Carrolls have also branched out into thoroughbreds in recent years, acquiring two mares and diving into the differences in the thoroughbred stud book.

“There’s a lot of thoroughbred stallions, and it’s a totally different pedigree to read. If you try to compare that to a standardbred you would think, ‘Why are you breeding to that horse?’ It’s interesting the difference in them, and even the mares,” said Carroll. “It’s just a different ballgame. Just something interesting to get into and, I guess, to diversify. You’re always learning something new.”

While all 17 mares and their offspring are a cherished part of Carroll’s equine family, she does admit to having a special relationship with Andover Hall mare Northern Flare, who earned $77,636 for her before entering the breeding program in 2011.

“We bought her as a yearling and I trained and raced her myself, so I guess she has a special spot with me. Her and I get along very well,” said Carroll with a laugh, adding that Wayne and children Zachary, Rhys, Makenna and Seth give her a hard time about her fondness for the mare. “Flare is, as Wayne would say, the golden child, in my eyes anyway. You have to have one, right? I think he does it just to rib me.”

Carroll’s lifelong passion for horses and harness racing has rubbed off on her children. All four contribute to the successful operation of Talbot Creek Farm and eldest son Zachary is currently working full-time at David Anderson’s St. Thomas, ON farm, extending the legacy of horsemanship into the fourth generation.