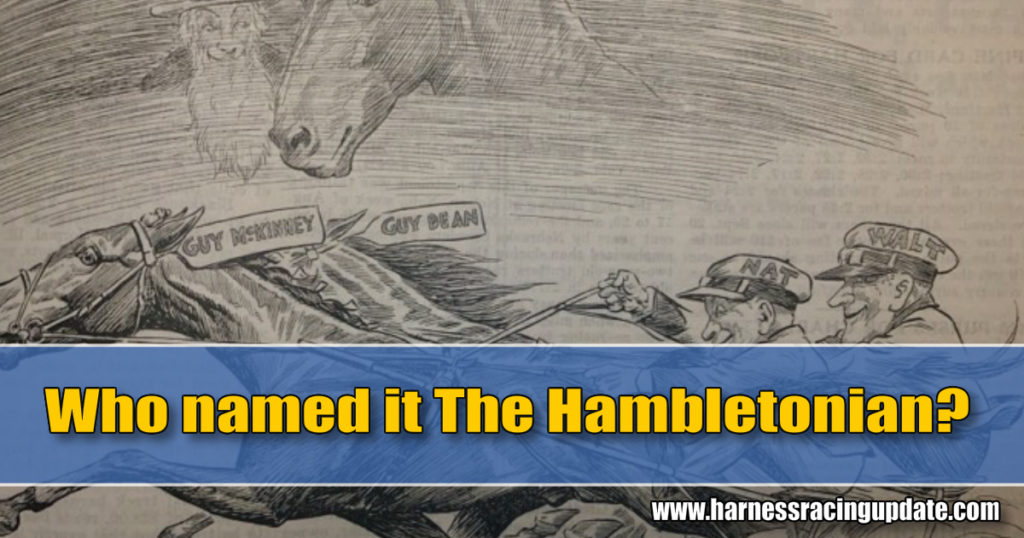 Who named it The Hambletonian?

The origin story about how the sport’s most famous trotting race got its name.

The titans of trotting were plotting in privacy in Chicago in early 1924. They had something up their sleeve, something that would shock the world of harness racing, but they took a vow of silence until all the details were worked out.

They were planning to launch a race like harness racing had never seen. It would have a jackpot purse impossible to imagine in the sulky sport, and it would not be a mere one-time extravaganza but instead a continuing classic.

It would be for trotters, of course, because pacers were still second-class citizens in the Roaring Twenties. And it would be for 3-year-olds, not older horses, to reward owners who supported early speed with their purchases at yearling sales.

They were huddled in the office of The Horse Review at 221 E. 20th Street in Chicago. The Review covered the trotting landscape across the continent and around the world. John C. Bauer, publisher of The Horse Review, was holding court in his personal office.

Meeting with Bauer were Harry O. Reno, a Chicago businessman and racing promoter, and Joseph I. Markey, the affable Iowan who was a long-time staffer at The Horse Review and beloved by horsemen for his bonhomie. Taking in the scene was John L. Hervey, another invaluable veteran at The Horse Review.

The men dissected the many intricacies and challenges of starting a new event. What payments would be necessary by breeders and owners to fund a record purse that would grab headlines? How much money could be raised by having host tracks bid for the honor of hosting the great event?

Where would the new race fall on the American trotting calendar?

How much money would be needed upfront to advertise the new event before they got the first dollar in payments?

They put their collective heads and collective wisdom together to address these challenges. They argued the pros and cons of each point.

Finally, it seems that everything had been decided to everyone’s satisfaction. The process — much like a mother giving birth to a child — had been hard labor in hopes of future rewards.

Then suddenly Bauer said in a calm and mild manner, “Well, boys, there seems nothing left to be done. But before you go ahead, I would call your attention to the fact that as yet your stake hasn’t any name. And it can’t very well be introduced to the public without one.

“What,” Bauer asked his cronies, “do you propose to call it?”

According to Hervey writing 16 years later, consternation swept the room as Markey and Reno stared at Bauer with bulging eyes and open mouths. They looked to Hervey for assistance.

Almost in unison, Market and Reno said, “Great Scott! We never thought of that!”

Brainstorming began immediately. But it went nowhere. Hervey later recalled the Markey and Reno were two of the most innovative minds in the trotting sport, but they were at a loss for ideas. (Reno was also the brother-in-law of William Monroe Wright, owner of the prominent trotting nursery Calumet Farm in Kentucky).
They knew, however, that if they hoped to create an event that would revolutionize the trotting sport, the name would have to be fitting.

Markey admitted, “A name must be thought up that will go a long way toward putting it over. A good name will be worth everything. A poor one will be like a ball and chain.”

The first suggestions were feeble grasps and summarily dismissed by all. They called in another staff member, Henry Allen, for help and moral support.

Finally, John Bauer glanced at a portrait of a horse hanging above his desk. A lightbulb went on.

“I propose that we call it the Hambletonian Stake,” he announced. “The trotting breed today is a Hambletonian breed. There is no other name in the trotting world that means so much.”

Bauer’s inspiration was the portrait of Hambletonian 10 done by artist Robert L. Dickey. It was painted from the only unretouched photograph of the horse known. It shows the great father in 1864 at age 16.

When the Hambletonian was announced, it was estimated that it might reach a purse as high at $70,000.

Many people scoffed at that notion. “Preposterous!” some declared. The richest race ever had been the $50,000 American Trotting Derby for older trotters in 1908.

Harry Reno, however, was a wheeler-dealer who had created the American Pacing Derby out of thin air and watched it offer a $25,000 purse to owners. Now Reno was dreaming even bigger.

The founders of The Hambletonian Society asked tracks to submit bid for the honor of hosting the new event. The Grand Circuit track in Atlanta offered a bid of $3,000. That was topped by a bid of $5,026 by interests in Kalamazoo, MI.

Neither bid, however, could match the $8,000 bid by the New York State Fair in Syracuse.

That allowed sponsors to dream of offering a purse of $50,000 for the first Hambletonian and they projected that the race might go for as much as $75,000 once established.

Fourteen horses — half of them fillies — were declared into the first Hambletonian, and Belwin was the leading sire with five starters.

After two heats, the trophy went to Guy McKinney, who triumphed over Guy Dean. Both were sons of the trotting patriarch Guy Axworthy.

Finishing third in the summary was the Peter Volo filly Ellie Trabue (the fifth dam, incidentally, of Speedy Crown).

The Hambletonian was an instant classic and an instant success.It has been the most coveted prize in harness racing for almost a century.