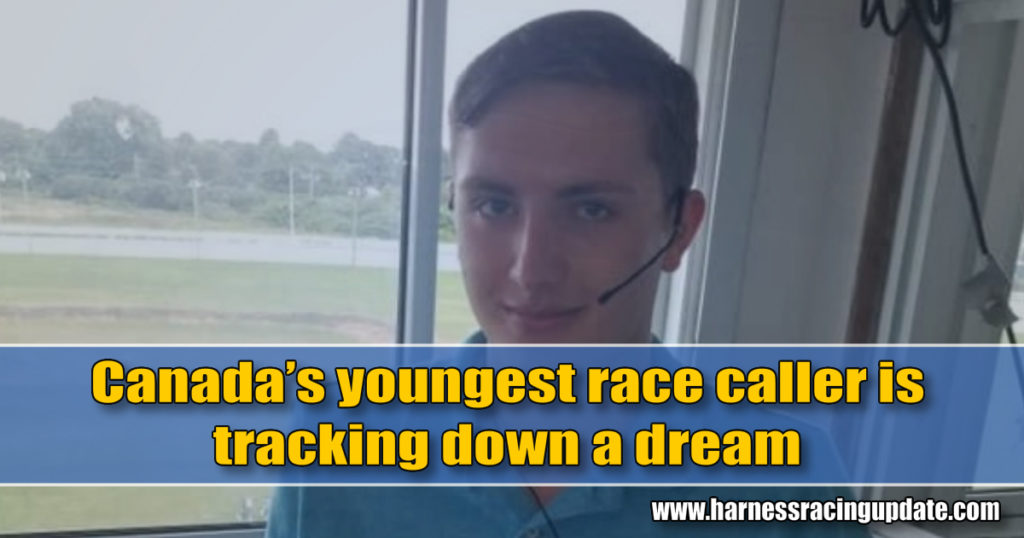 Canada’s youngest race caller is tracking down a dream

It’s official — Nathan Bain is Canada’s newest, and youngest, track announcer. On Aug. 9 he will be on the mic at his hometown Leamington Raceway to start the 2020 season. “The position became available this year. Last year, [Gary Patterson] from Dresden Raceway filled in,” said the recent high school graduate. “I’m 18. I’m ready. I have 100 calls at nine different tracks, six in Canada and three in the US.”

Leamington Raceway has grown up alongside its increasingly well-known ambassador, rapidly evolving from a small fair track to Windsor Raceway’s closest geographical successor in southern Ontario. Bain said he visited the latter “as a kid, but I didn’t like it and I wanted to go home.”

Leamington relaunched as a pari-mutuel venue in 2013, after Windsor Raceway permanently closed.

“When [Leamington] reopened, I was 11 and I was there on opening day, to support my grandfather’s horses,” said the long-time racing fan. “There used to be four days of fair racing, before they got 13 race days.” The half-mile, non-slots racing venue is operated by the not-for-profit Lakeshore Horse Racing Association, which is looking to renew its pari-mutuel racing contract after the current five-year deal with the province expires later this year.

Although COVID-19 precautions will keep Leamington Raceway from opening its historic grandstand to fans this season, Bain said horsepeople will find the paddock well-equipped to manage social distancing measures. “Some of the owners like to come in the paddock and are not allowed to anymore. Essentially, it’s one groom [per horse] and the trainer,” Bain said. “We’re lucky we just built a nice paddock five years ago, and it’s for like four or five races, pretty spread out, so that works out really well.” With large sliding doors for ventilation on each row, the structure can safely accommodate the essential workers attending to horses there.

The Windsor-Essex County racetrack must follow provincial guidelines specific to its location, regardless of what other Ontario tracks are doing, because the local agri-farm industry (but not its racing colony) and long-term care homes have been hit hard by COVID-19. “The Leamington area remains in Stage 2, probably for a while,” said Bain. “We can’t have anyone here until we’re in Stage 3. We have no choice.”

He said he’s disappointed for the fans and bettors who normally populate the ancient grandstand’s ground-level bar and outdoor seating areas, the die-hards often toting their own lawn chairs. Many are former Windsor Raceway or Michigan horseplayers. “They out-bet some of the other Ontario ‘B’ tracks here,” said Bain, who hopes that a new graphics package this season will contribute to a stronger online presence and greater appeal to the American ADW audience. Last year, the single-card handle averaged $34,000 (Cdn), with around $27,000-$28,000 of that total wagered on track.

“I’m anxious what the handle is going to look like this year,” said Bain. “We’re open to a lot of ideas this year.”

Expect contests, more online content, and even a newly-installed camera in the race-caller’s booth, allowing Bain to present handicapping notes and program changes with the same visibility (and camera) that Clinton Raceway guest callers Frank Salive and Greg Blanchard have been using this summer.

Bain earned his announcing position thanks to years of rehearsals, which began with recording his race calls on a phone app at home and bringing them to Leamington Raceway for in-house critique. “I’d get the program early and just practice and practice. I definitely pushed a lot to get opportunities,” he said. Although Nathan’s family owns six standardbreds, including the currently-active Onimpulse and Smile In Style, and his grandfather, horseman Tom Bain, is current Mayor of Lakeshore and past Warden of Essex County, these factors didn’t make his rise to the booth inevitable. Instead, Nathan sought out chances to guest-call at various venues, starting with a single race at his home track’s Kids’ Day in October, 2014. He readily recalled that it was won by trotter Coffee Black, driven by Scott Wray.

“For 2015 and 2016, I did the [Leamington] Kids’ Days. I was only doing one race per card at that point,” said Bain. “Flamboro reached out to me in 2017, so I called a couple of races there.” Encouraged by announcer Gary Guy, Nathan went to Grand River Raceway to call a single race in August 2017, and returned to Flamboro for a couple more in 2018. “I called my first race in London [The Raceway at Western Fair] in January 2018. I would go up and sometimes announce the post parades there, starting in 2015. [Announcer] Sugar Doyle would give me advice.”

In 2018, Bain asked Dresden Raceway’s general manager Greg Blanchard about opportunities. “We talked about my joining the team, and I got hired to do picks for the program, interviews and that,” said the aspiring race caller. “I was back-up announcer and created a Twitter account for them, too.” Although unable to participate in the same way this summer at Dresden, Bain stayed involved thanks to the track’s race caller.

“Gary Patterson is really good there. He connected me to Gerald Hill from OnTrack [Media and Entertainment], and gave me the graphics operator position at Dresden,” he told HRU. “Now I work up on top in the OnTrack room where the camera person is. We’re both wearing masks.”

The two tracks’ dates intersect perfectly for Bain, with the Dresden meet ending Aug. 3, one week before Leamington’s August 9 season opener. Although Leamington Raceway’s Sunday race dates would not have interfered with his upcoming academic year in St. Clair College’s Advertising and Marketing Communications Management program, the newly-named announcer won’t be travelling to classes at the Windsor campus, anyway. “Everything is going to be online this year. There are pros and cons,” he said.

With his dad, Dave, getting his trainer’s license this week, Nathan said he also plans to be in the industry for years to come. He shared updates on six family-owned standardbreds, including a pair of 2-year-olds (Up the Credit filly Recall Tootsie and Armbro Warranty gelding Spare Time Serg) who are turned out; 3-year-old Warrawee Needy filly Tilly Dreamcatcher who is “just starting to come back”; and race mare On a Cloud, who is “out in the field” after failing to get in foal.

There have been disappointments, but Nathan Bain’s interest and involvement in racing have stayed strong. “I was supposed to call a race at Pompano this year, but then they cancelled,” he said, recalling how his family vacation was suddenly on indefinite hold in March due to the emerging pandemic. “Actually, we cancelled before they cancelled — we were supposed to go on a cruise. We’re happy we stayed home.”

Bain had previously called individual races at Northfield Park and Miami Valley Gaming, and was looking forward to his return to Isle Casino at Pompano Park, the scene of his most unforgettable night at the track. During March Break 2017, Nathan met announcer Gabe Prewitt and Goshen Hall of Fame Communicator John Berry at Pompano, then called a race there: “It was a lot of pressure. Frank Salive came in right before, and then John Campbell came in.” Afterwards, the Bains were joined by the Hambletonian Society’s Campbell, Moira Fanning, and Tom Charters to watch the remaining races together.

Follow Nathan and Leamington Raceway at lakeshorehorseraceway.com when the live racing season gets rolling Aug. 9. The track will play host to the Prospect Series for 2-year-old pacing fillies as part of its season-opener card; 2-year-old and 3-year-old male pacers Sept. 6; and 2-year-old male trotters Sept. 13. Leamington is also racing on Labour Day 2020 (Monday, Sept. 7) in exchange for giving up its Aug. 2 race date to Dresden.