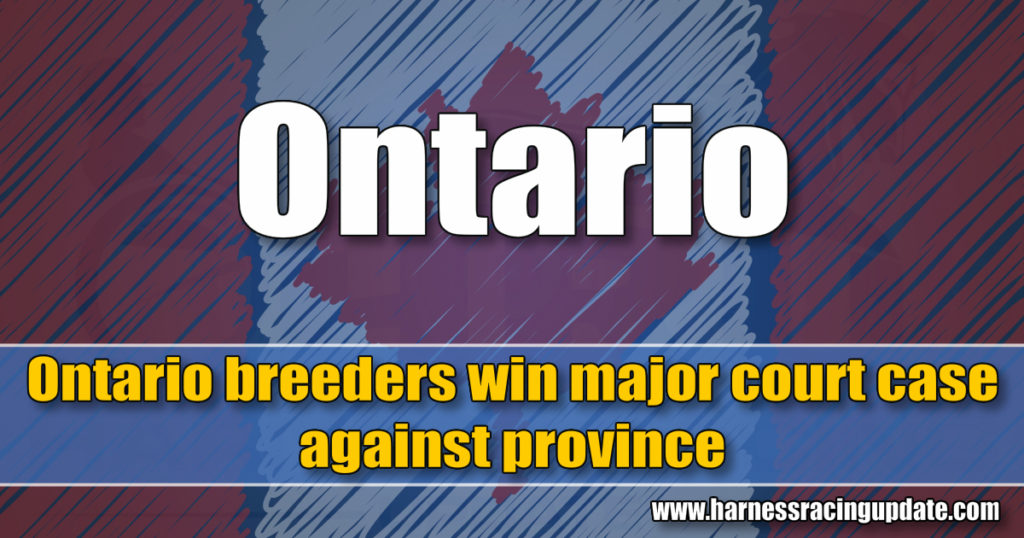 A group of 36 Ontario breeders seeking damages for the abrupt cancellation of the former Slots At Racetracks Program (SARP) have won a landmark court judgment over the Province of Ontario (full decision here).

In a decision dated Monday (June 29),Ontario Superior Court Justice Michael Emery ruled in favor of the plaintiffs’ motion for a summary judgement against the province for breach of contract.

The breeders have been seeking $65 million in a case that has taken six years to resolve. Damages for breach of contract will be calculated in a future court proceeding.

There is a 30-day period to appeal the decision.

Jonathan Lisus of Lax O’Sullivan Lisus Gottlieb LLP of Toronto, successfully argued on behalf of the breeders tied to the Standardbred Breeders of Ontario Association (SBOA).

Emery’s ruling said he accepted the breeders’ argument that there was a breach of the valid contract between the breeders and the province that came from a 1998 Letter of Intent (LOI) that was “the crucible that contained the overall terms for SARP, how it would work and the essential benefits it would yield to interested parties.”

All other claims against the province — including those launched against the Ontario Lottery and Gaming corporation (OLG) specifically — were dismissed.

Lisus told The Toronto Star’s Mary Ormsby (full story here), “It’s not easy to win against the government in a civil case.

“The breeders were really very brave to take this on.”

The breeders did not contest the right of the province or OLG to terminate SARP, Emery wrote, but, instead, successfully argued they were given “insufficient notice of that cancellation because of their rolling investment to breed horses.”

SBOA president Walter Parkinson told Ormsby, “It was a very long, drawn out process, but we remained optimistic. I think we have a renewed sense of optimism now, with this judgment, that the long wait was worthwhile.”