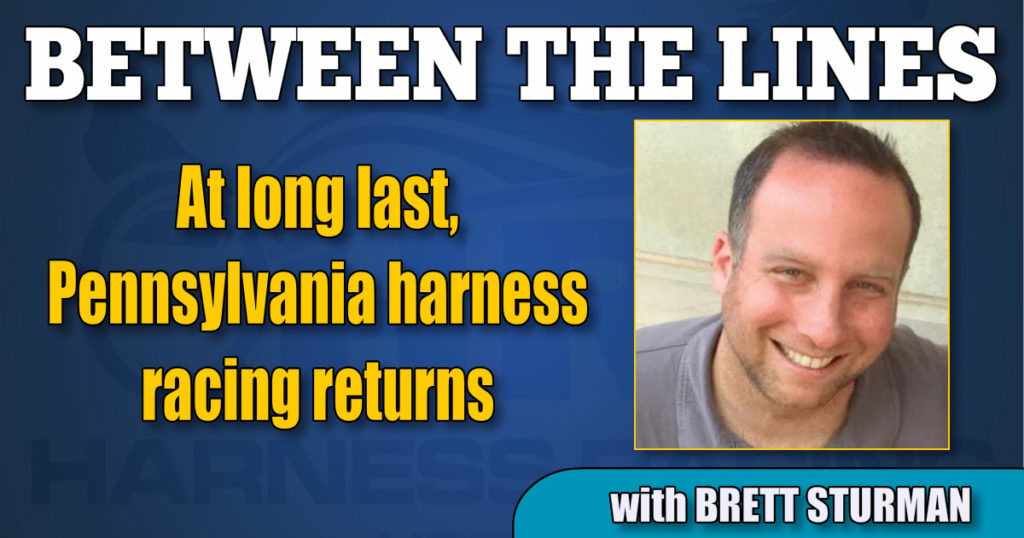 All three of the state’s harness tracks will be back racing live as of this weekend after a nearly 100-day hiatus.

When harness racing resumed at The Meadows this past Monday (June 15), it marked the first time since March 9 (at Mohegan Sun Pocono Downs) that live harness racing was contested in the state of Pennsylvania. It’s been a long road that at times has seemed far longer than three months, but as of this weekend all three harness tracks in the state will be back and running.

In addition to The Meadows, Pocono Downs restarts their season on Saturday, with Harrah’s Philadelphia kicking off their season the day after on Sunday. With an abundance of horses needing to be raced, Pocono has carded 14 races on Saturday and again Sunday, with Chester kicking in another 14 races of their own on Sunday. When you throw in the Meadowlands — located at a shouting distance from Pocono and Chester — carding 36 races between Friday and Saturday, it is clear just how many horses there are to be entered.

The re-opening of the PA harness racing came as horsemen and women throughout the state – many of whom rely on racing exclusively in PA – were bordering on a crisis after three months of limited to no income.

Sam Beegle, the president of the Pennsylvania Harness Horsemen’s Association (PHHA) said horsepeople were, “all very elated. They’re just tickled to death that we’re back and that we’re racing.”

Presumably after working through some political issues, “The governor gave us the go-ahead and then we really got to work to get all the safety protocols passed with the state health department as quickly as we could,” Beegle said. “It took a lot of work by a lot of people, and I want to recognize the efforts of our entire PHHA board and our two lobbyists. They were extremely instrumental and helpful throughout the entire process.”

While Pennsylvania was the last major racing jurisdiction to have been given the green light to resume racing, Beegle notes the quick turnaround between the time racing got the go-ahead to resume and the time the first horses hit the track.

“Part of this is that we actually just got back, and we actually turned around and started back about as quick as any of them. And that’s what tickled everybody. We had to work hard to not only get health insurance passed, but also we’re continuing in paying real close attention to the safety protocols,” Beegle said.

Just yesterday, the PHHA announced that the PA All-Stars initially scheduled to be held at Pocono Downs during the stoppage, has been rescheduled in dates throughout July and August. Beegle added that, “The rescheduling of the sire stakes is going to come out probably over the next day or so. Everything has been rescheduled except for the traditional four major races on Sun Stakes at Pocono (Earl Beal, James Lynch, Max Hempt, Ben Franklin).

“And under that situation, we only had to drop the purses minimally. In the first couple of weeks we’re going to give a stipend to anyone that races a horse for the first week or two and help them get back on their feet. We’ve been helping with health insurance, and overall, we’re just going to work hard to get everybody back and get everybody racing. And the more tracks that open up the more opportunities there are going to be for all of us.”

Beegle said the minimal purse reduction was done, in part, as a precaution.

“We wanted to be careful that if there’s a recurrence of (COVID-19) this year, that we’ll be ready to go again next year. And that’s the biggest reason we’ve done it. We want to mind our P’s and Q’s and be practical.”

With the relationship of race purses to the casinos the tracks are connected with, further good news is that casinos, too, are re-opening. The Meadows gaming facility opened two weeks ago on June 9, and Mohegan Sun at Pocono is scheduled to re-open on Monday, albeit with limited capacity. At Harrah’s in Chester, a date for that casino’s reopening is still to be determined.

Though racing has been lost in recent months, most stakes in the state has been preserved, as Beegle noted earlier. And with a consolidated stakes schedule, racing is about to jump directly into stakes season.

Beginning next week, The Meadows features the Currier & Ives and the Arden Downs stakes for 3-year-olds, with PA Sire Stakes and Stallion Series going the week after that for the freshmen. Similarly, Pocono Downs will race the PA All-Stars in July while Chester goes right into Sire Stakes action for 2-year-olds in less than two weeks. Between the compact stakes season and the large number of overnight races, there will be opportunity for the race participants to make up for not racing earlier in the season.

With all of the state’s harness tracks about to be back into full summer swing, there’s a feeling that the nearly 100-day interruption may soon be a fading memory.