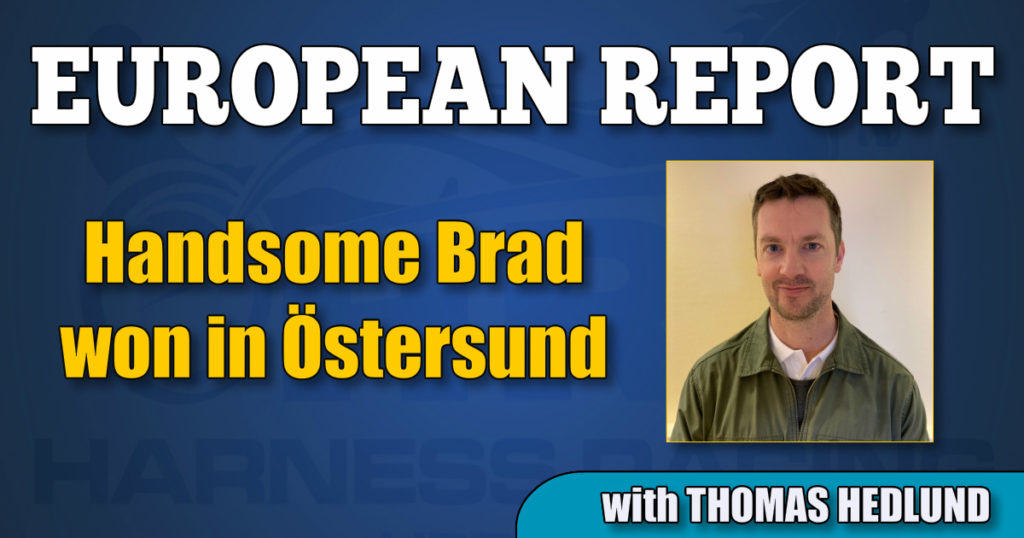 With races being held without spectators in Sweden, several prestigious races have decreased purses and the Jämtland Stora Pris in Östersund is one of them. The $110,000 race for elite trotters did, despite less money in the purse, collect a super field of 10 trotters this year and the winner was excellent from third over.

Cyber Lane led the race with Velvet Gio on the outside and the front duo seemed to have stolen the show midway through the race. The pace wasn’t set too high and Carl Johan Jepson, driver of Handsome Brad, had no other options than to leave his position in third over with a half mile to go in the 1.3 miles long race.

The mile rate for winner Handsome Brad was 1:56.2 on a sloppy track in Östersund.

Handsome Brad has now a $552,150 lifetime earnings and has claimed 13 out of 52 starts. The 7-year-old colt showed that he’ll be a serious factor in the big races in northern Europe this summer.

Speaking of the V75, the COVID-19 virus still makes harness racing a strong betting factor in Sweden. The betting handle for the V75 reached a total of $17,337,113!

Jean-Michel Bazire’s gelding Cleangame was heavy favorite when the $96,200 Prix Chambon P was held in French Laval on Saturday afternoon. The race card should have been held at Vincennes, but due to the COVID-19 situation, Paris is considered a red zone and horse racing is not allowed in the area.

Cleangame was given a perfect trip in third over while Enino du Pommereux (Coktail Jet) led the field over the distance 1.7 miles. Cleangame could never really get in serious contact with the leader. Enino du Pommereux had some difficulties with his gait in the last turn, but when driver Matthieu Abrivard used the closed bridle at the stretch, the front runner left the opponents in easy style.

The mile rate was 1:56.2 and Cleangame finished second in 1:57. Bazire’s top gelding raced in Caen three weeks ago and then made a break as beaten by Elitloppet contender Earl Simon, among others.

The $96,200 Prix Louis Jariel for 5-year-olds ended in great victory for Feliciano (Ready Cash), trained by Philippe Allaire. 1:56.2 over 1.3 miles was mile rate in the race.