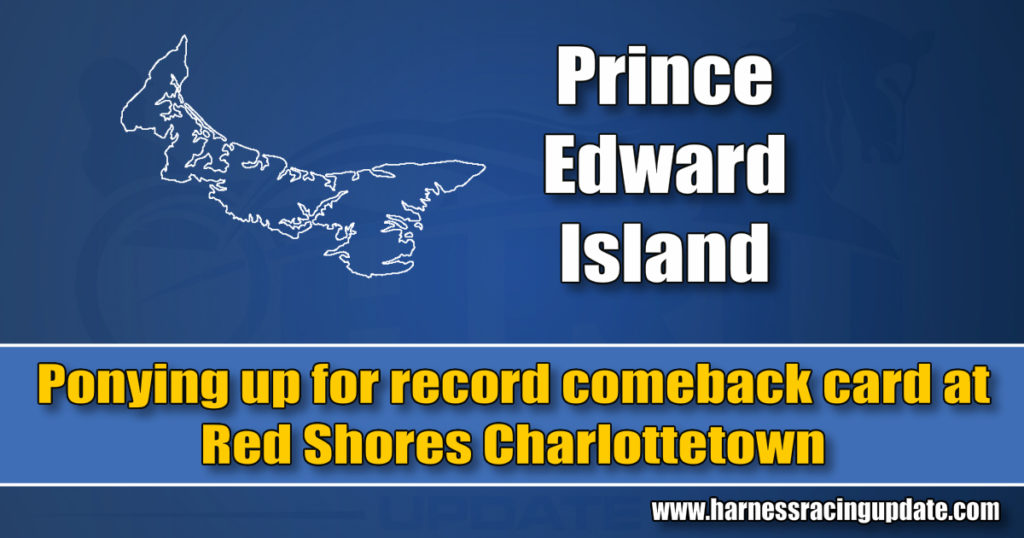 Ponying up for record comeback card at Red Shores Charlottetown

A sense of normalcy began returning to Canadian harness racing Thursday night when Red Shores Charlottetown staged the country’s first pari-mutuel card of the post-COVID-19 era. The half-mile landmark had previously played host to four qualifying dates (May 23, 28, 30, and 31) without spectators in attendance, as anti-virus protocols were put into place.

June 4 would be a test to see whether standardbred-starved horseplayers would pony up remotely on Horseplayer Interactive (Canada’s lone legal AWD site) and the 23 American ADW sites carrying the PEI track’s signal. The harness wagering landscape was no longer completely lacking in North American product: Ohio’s Scioto Downs led the comeback May 22, bringing in million-dollar handle after million-dollar handle on successive nights. It was joined by Northfield Park May 26.

The Prince Edward Island track’s first pari-mutuel card since February 1 was a “historic night”, remarked track announcer Vance Cameron. “There’s been one word missing from Canadian harness racing and that word is… POSTTIME!” he declared as the first of 10 races went behind the gate. The winner of the Canadian comeback card was Jays Little Spark. The 8-year-old pacing mare, owned by Chris MacInnis of Hampshire, PEI, trained by Gregory MacInnis, and driven by Dale Spence Jr., upset at 9-1 odds in a three-mare, 1:59.3h photo finish. The race 1 pools totalled $7,992 (Cdn.).

Bettors sent just three races (races 4, 7, and 9) into five-digit territory, indicating that the Canadian season opener’s handle would not near the “Fonner North” heights enjoyed by Manitoba’s Assiniboia Downs on May 25. Canada’s first thoroughbred track to reopen post-COVID-19 doubled its typical handle when it drew $1.067-Million (Cdn.) over a six-race card.

Fans of Vance Cameron’s “BOOM—Just like that!” call were treated to the popular catchphrase as Arc Light and Campbell hit the wire all alone in the final race. The 3-5 favourite paced a final quarter of :27.4 for the 1:58.2h victory.

Official handle for the night was $102,308 (Cdn.), a June record for the track, which opened in 1888. It’s a respectable figure, given the popularity of on-track wagering at the racino. The empty grandstand would normally be a hive of activity on a perfect June evening, complete with line-ups of tourists and regulars ready to bet. On the 2017 World Driving Championship final/Gold Cup and Saucer Consolation night when Red Shores CDP brought in its all-time record handle ($391,031 Cdn.), “standing room only” was a major understatement.

Red Shores CDP has weathered a past pandemic. Charlottetown Driving Park opened 40 years before Spanish flu claimed tens of millions of lives worldwide (1918-20). Because Prince Edward Island closed its borders to out-of-province visitors and restricted public gatherings, it was able to reduce the impact of the deadly flu outbreak. One track, near Kensington, PEI, was even opened by horseman Tyndall Semple in 1918; the matinee racing site remains in use today.

The Charlottetown races are back Saturday, June 6, with a post time of 6 pm. In neighbouring provinces, Nova Scotia’s Truro Raceway returns to action at 6:30 pm Friday, June 5, and New Brunswick’s Exhibition Park Raceway debuts at 1 pm on Saturday, June 6. All times are Atlantic, and all three tracks are available for online watching and wagering only, until further notice.