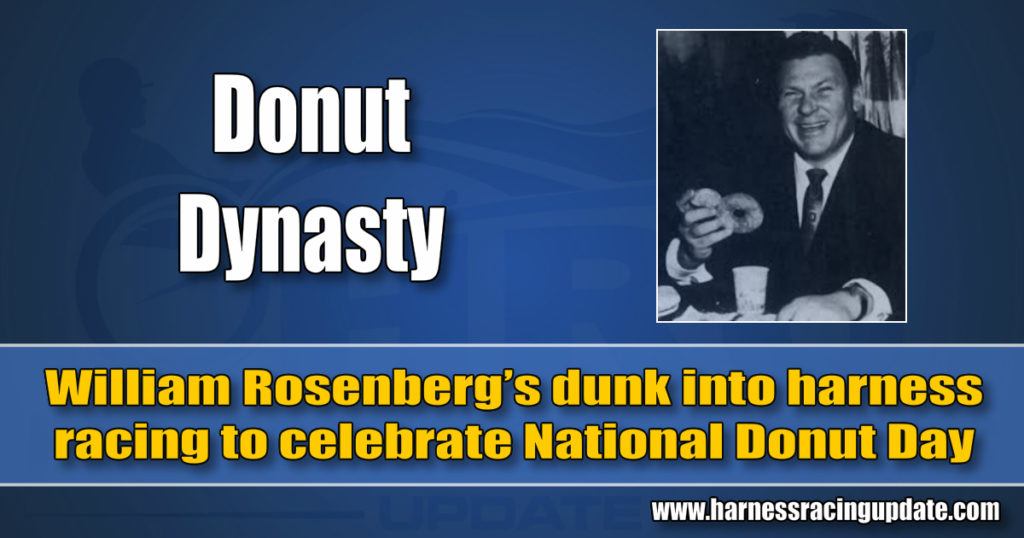 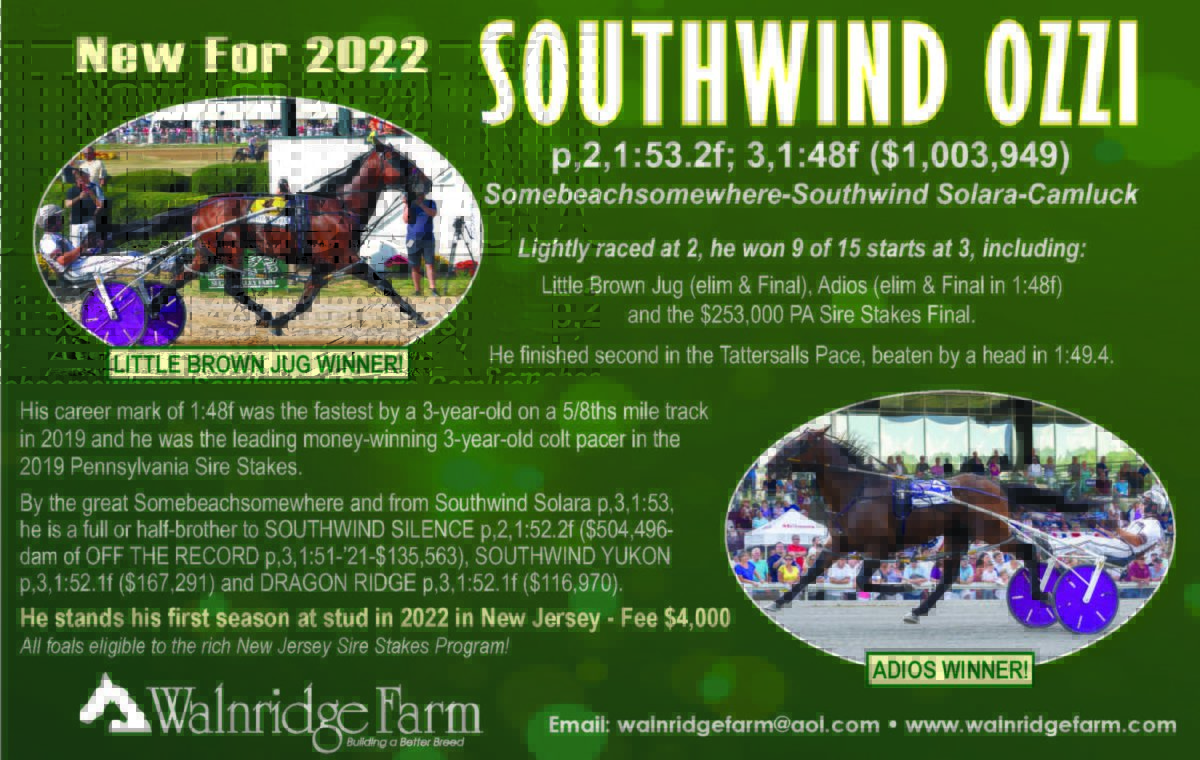 Today (June 5) is National Donut Day 2020. On the surface, this has little to do with harness racing, beyond picking up treats on the way to the barn or at the track canteen. Underneath the icing, though, there’s a donut dynasty that was part of the sport for much of the 20th century.

William Rosenberg delivered milk via horse-drawn cart as a teenager, one of several early jobs held by the Boston native in the 1920s. The natural entrepreneur explored a variety of food and beverage business concepts, then went to work building warships in Massachusetts as part of American World War II efforts. After the war, he developed the first “canteen truck” to deliver mobile meal options to worksites. Coffee and donuts were the most profitable items sold by Rosenberg’s Industrial Luncheon Service. The astute businessman took note, starting his first coffee and donut shop in 1948. Then named The Open Kettle, the Quincy, MA snack counter was renamed in 1950.

You may have heard of Rosenberg’s business, which he franchised to great effect beginning in 1955. In 2000, Dunkin Donuts opened its 5,000th outlet, in Malaysia. Two years later, the man who started it all passed away at home in Mashpee, MA at age 86.

Later in life, the donut dynasty founder had established a standardbred nursery that became the largest in New England. In 1963, Rosenberg handed operational control of his successful company to his son, Robert. While still involved in Dunkin Donuts at the board level until the company was sold in 1990, the elder Rosenberg was now free to explore racehorse ownership; starting with no previous expertise or experience, he sought out advice from the likes of Del Miller and Norman Woolworth, then founded Wilrose Farms in East Kingston, NH. In 1968, he purchased his first standardbred, a homebred pacer named Papa, for a price of $15,000 from Josephine Dadie Jordan. Soon Wilrose Farms branched from racing into breeding as well.

Despite his health issues, Rosenberg was able to enjoy standardbred ownership. He devoted more time to racing and breeding after being diagnosed with lung cancer in 1971. In 1976, the donut magnate was struck by another cancer, lymphoma. Dunkin Donuts was battling for survival at the time, after expanding overzealously into unreceptive markets and facing a class action lawsuit from disillusioned Philadelphia-area franchisees. But like its founder, the company proved resilient: The introduction of bite-sized “Munchkins” donut holes returned Dunkin Donuts to profitability.

Wilrose Farms — a contraction of “William” and “Rosenberg” — was home to 200 standardbreds at its peak, including 30 racehorses. James “Roach” MacGregor trained for Rosenberg in 1968-69, recalled Prince Edward Island racing historian Jerry McCabe.

“[MacGregor] did purchase Ideal Donut at a yearling sale for Rosenberg in 1968, and he became Meadow Skipper’s first stake winner before dying during his 2-year-old season from colic,” McCabe said.

“Queen’s Donut was another stakes winner they had. I believe he also had both Coral Ridge and Miami Beach for Wilrose Farms,” said McCabe.

After MacGregor had parted ways with Rosenberg and returned to his native PEI in 1970, the deep-pocketed owner bought double-gaited Down Under star Mount Eden for $300,000 — an Australian record for any breed of racehorse. Trained by Stanley Dancer, Mount Eden A bowed a tendon before his North American debut at Yonkers and never raced for Rosenberg.

From 1971 onward, most of Rosenberg’s racing stock was trained by Jim Doherty, the Hall of Fame horseman who made the move from New Brunswick to New England’s Foxboro Raceway and Rockingham Park in 1969-70. The last broodmares of Wilrose Farms, some owned in partnership with Lana Lobell Farms, were dispersed at public auction in 1985-86. Speedy Somolli was the last horse owned by Rosenberg; the stallion was sold to Swedish interests for $3.6 million in 1985, with his former owner declaring “That’s how I got out of the horse racing business.”

Much of Rosenberg’s 2001 autobiography Time to Make the Donuts(written with Jessica Brilliant Keener; Lebhar-Friedman Books) is dedicated to his harness racing pursuits. “My farm was a showplace. People from Kentucky — home of the great horse farms — raved when they visited Wilrose Farms,” he noted in the book, showing his promotional mindset in vivid detail: “Our grooms wore white T-shirts that said WILROSE FARMS. They wore black jeans and dark red shirts with our motto: WILROSE FARMS—DEDICATED TO BREEDING EXCELLENCE. Everybody from our farm wore this uniform. We had carpets rolled out so that when our grooms walked the yearlings, they walked them on the carpets.”

In keeping with cross-promoting his business ventures, many of the yearlings Rosenberg purchased were renamed to include the farm name “Donut”: “We had Ideal Donut, I’m a Donut, King Donut, Cinnamon Donut, Steady Donut, and many others.”

Rosenberg tried to bring to his chosen sport to the level of popularity enjoyed by the coffee and donut chain he founded, attempting to combat declining public interest and the erosion of corporate sponsorship in harness racing. The 1978 USHWA Good Guy Award winner established the North American Harness Racing and Marketing Association in 1983 by reaching out to his many connections, but the organization was ultimately unable to overcome rampant racetrack closures, damage to the sport’s public image, and industry infighting.

The philanthropic Rosenberg donated his namesake property, valued at $2 million, to the University of New Hampshire in 1980. Inducted to the New England USHWA Chapter’s Hall of Fame in 1979, the lifelong innovator was named the inaugural recipient of Harness Horsemen International’s Achievement Award in 1988. In 1994, Wilrose Farms was sold by the University of New Hampshire to establish its pioneering William Rosenberg Chair in Franchising and Entrepreneurship.

Wilrose Farms is gone, while Dunkin Donuts lives on, rebranded as “Dunkin” in 2019. Food for thought while browsing the free donut possibilities at Dunkin (and some prominent rivals) today for National Donut Day.