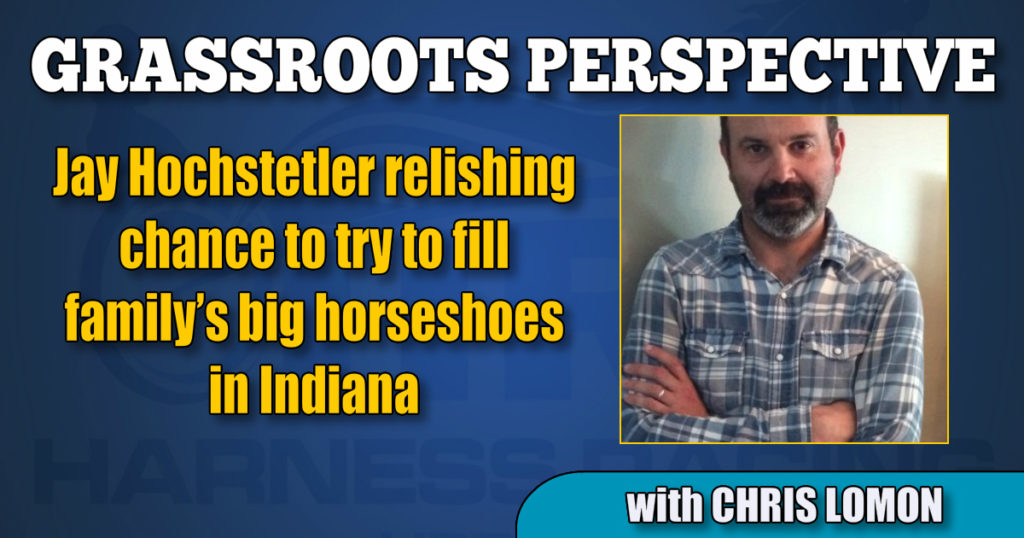 Last week, the third-generation horseman and social media fan moved to Anderson, IN, got married and opened his stable at Hoosier Park.

Jay Hochstetler may have standardbred racing royalty in his DNA, but the hardworking horseman has shown a capacity for creating his own crowning moments on the racetrack.

His father,Homer Hochstetler, has tallied nearly 1,900 wins as a trainer. His mother, Connie, has been part of the harness racing world for a big part of her life. His late grandfather, Douglas J. Ackerman, is a Hall of Fame horseman.

No doubt, those are big horseshoes to fill.

But the young man who holds the role of assistant trainer for Homer Hochstetler Racing Stable is very much making a name for himself.

It was just over 10 years ago when the Chicago-born Hochstetler was named the 2009 Illinois Amateur Driver of the Year.

It was an impressive honor made even more special considering horse racing wasn’t on his radar until a few years before he received the recognition.

He had, however, shown a keen eye for horse talent at a very young age.

Having a front-row seat to watch the great Kadabra remains a fond memory for Hochstetler.

Bred by Connie Hochstetler, the trotting giant and future Hall of Famer would go on to win 25 of his 36 career starts, accompanied by over $2.1 million in earnings.

After his 2-year-old campaign, the Hochstetlers made the decision, albeit reluctantly, to sell Kadabra to Peter Heffering, who, along with Irving Storfer’s Banjo Farms, Lee and Linda DeVisser’s L and L DeVisser LLC, Irving Liverman and David McDuffee, raced under the Abra Kadabra Stable umbrella.

“When he won the (2001) American National – he actually dead-heated – I cried as an 8-year-old because I thought he was never supposed to lose. When we sold him, they came and saw him. It was an $800,000 sale, and I looked right at them and said, ‘You got a bargain.’ Years later, I saw them again, and Mr. Heffering said, ‘You were right.’”

Although Hochstetler knew top-tier ability when he saw it, horse racing wasn’t a top pursuit during his teenage years.

Life on both the baseball diamond and volleyball court was, at one point, his primary focus.

Hochstetler was a standout in both sports, especially volleyball, at Marian Catholic High School in Chicago Heights.

With an unmistakable tinge of self-deprecation in his voice, he recalled the moment he realized overhand serves and digging hard-driven spikes wouldn’t make for a prosperous career.

“I played quite a bit of volleyball in college for Kentucky, playing on their club team. There aren’t too many spots open for 5-foot-7 guys in professional volleyball leagues, so I had to set my sights on something else.”

There was a place where he felt he could stand out.

And he had quite the team to learn the ropes from.

Hochstetler, who started jogging horses for his father about a dozen years ago, contested his first amateur driving race on July 19, 2009 at Balmoral Park.

While he’s sat in the sulky sparingly since then, he found his true horse racing calling as an assistant trainer.

“I’ve been lucky to learn from my dad, who has had plenty of good horses, and from my grandfather as well. I’ve been able to learn so much from them.”

“When I first went to see him at the sale they had all girls working for them,” said Hochstetler. “And they were petrified of him. When they walked him out, he had everything. He had a really nice presence about him. He’s a big, dark horse. He has a lot of muscle tone on him, even as a baby.”

Hochstetler had done his homework on Bro, and was eager to buy the pacer.

The only caveat? The price needed to be right.
“I was familiar with the family. His mom (Gro) was a really good open mare for a long time in Illinois and New York. I knew a brother of a dam, so I knew the family, and I knew they were fast. He was the right price ($22,000 USD) for what I was looking for. I’m very lucky that I have a good partner, Arty Finkelberg, who lets me pick out the babies, and he takes half of them.”

Trained by Homer Hochstetler, Bro had a memorable 2019 campaign.

He won the New York Sires Stakes Consolation Final, a two-length score at Vernon Downs in September, and followed it up with a smart score in the Gary Kamal Memorial Pacing Series Final, a half-length triumph at Saratoga Springs in October.

“I think my proudest came last year. I bought Bro myself and picked him out on my own at the sale. To have him go out and win two stakes races has been amazing. It was affirmation that all the lessons I tried to learn finally paid off.

“He was good right from the start. He was really fast. You could tell he had that quick trigger. He ended up with a bone cyst at two, and it really started to bother him after his second start, so we immediately shut him down. His whole family showed they were at their best when they were four, five and six. He came back at three – knock on wood, he hasn’t had any more trouble with that bone cyst – and it’s paid off. I think he’ll be even better this year. He’s grown up so much. He’s such a strong horse. I’m hoping that he can follow his family, and keep getting faster as he goes along. It will be great to be part of that journey.”

Hochstetler has recently been on a journey of his own.

While there are seemingly endless stories about the tedium and trying times associated with life during the COVID-19 pandemic, he has a couple of things to celebrate: marriage and a move.

On May 21, he and his fiancée, Amy Norotsky, moved to Anderson, IN.

After years of sojourning throughout New York State, Hochstetler won’t have to hitch-up his trailer and fill his gas tank nearly as much as he’s been used to.

“We’ve had Indiana-breds off and on over the years, so we have enough – 12, in total – to have a stable at Hoosier Park. Now that I’m getting married, I want a place that I can call my own, instead of travelling around a lot. We can start a family, and at Hoosier, without the shipping, it will be a nice place to be. My dad and I thought it would be a good direction to go, so we’re going to start it up out here.

“I have one horse that I’m really excited about here. It’s actually my grandma’s horse, General Doug A. He’s a really nice horse, and we ended up shutting him down early last year. I think if he stays right, it should be a pretty exciting summer for us.”

He’s hopeful it will be a summer of content.

“After racing in the New York Sires Stakes for so long, now, I can walk to the paddock. I can’t tell you how many times I had all the long nights driving home from Yonkers. It takes a toll on the horse and it takes a toll on the person. I really think that’s a great thing about Indiana – I can race and come home and have dinner afterwards. I think that’s an underrated thing in our career, that work-life balance.”

One part of his racing life that he won’t leave behind in the Empire State is his penchant for being a strong presence on social media.

Hochstetler, who has over 1,700 followers on his Twitter page (@JDHarness), isn’t shy about offering up his opinion on racing-related topics.

“Since I’ve been on social media, I realized it’s not as tapped into in our business as it should be. There are people that do a tremendous job with it, but it’s still growing. I think it’s the best way to get your name out to people that don’t know you. I’ve had a lot of luck on social media, and I’ve also put my foot in my mouth a few times. I think everybody does at some point. But, I’ve met owners and people who have bought and sold horses – for our business, I think it’s crucial to have that type of wide-reaching network.”

And for the Indiana-based horseman, it’s equally as important to stay levelheaded in a sport where it’s not easy to be.

It’s a mindset Hochstetler is still looking to master.

“I can be a bit pessimistic. In this industry, there are so many peaks and valleys. When you hit the valleys, it’s hard. I’ve been lucky to have people like my father who is very good not getting too carried away with the highs and the lows. My grandfather was the same way. I’m much better at it, but I think that’s the toughest thing, trying to stay calm and composed, reminding yourself what you are doing is right, and it will take care of itself.”

Just like the day three years ago when he picked out Hip #660 at the Harrisburg sale.

“I’m so lucky to have learned so much about horses from my family. Not a lot of people can say they have that. It makes you feel…”