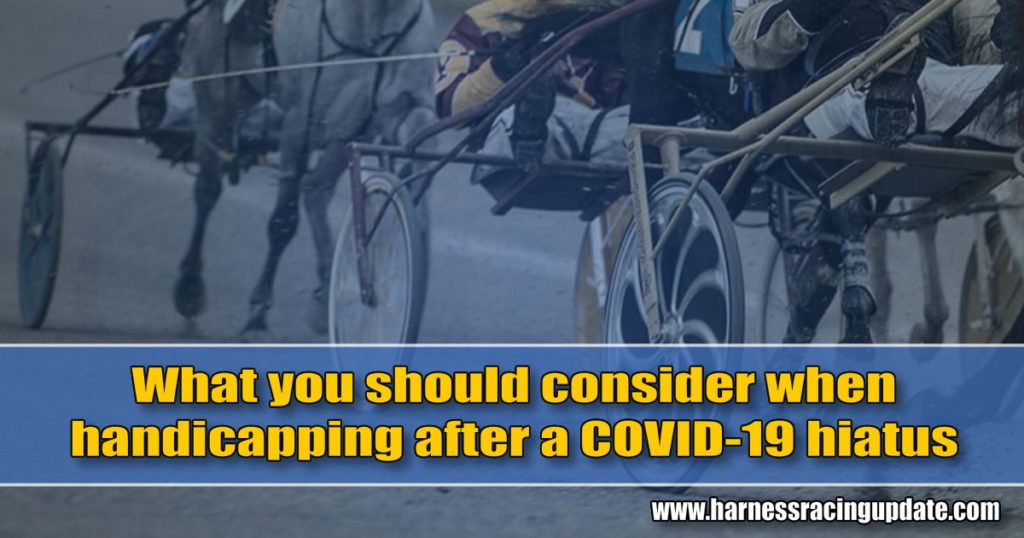 Four important tips to making your return to betting harness racing a successful one.

As the pari-mutuel tracks gradually start to reopen after their COVID-19 hiatus, bettors with bankrolls growing itchier by the day are starting, or getting ready to start, to swing into action.

As if it isn’t hard enough to try to get a profit through the windows in normal circumstances, our present handicappers face the challenge of evaluating horses who haven’t competed in purse races for months at a time, or have only one purse line since returning, or so forth, as opposed to the “old norm” of most horses having established form through a basic racing schedule. Obviously, some additional compensation for this factor will be needed.

Here are some of the basic adjustments to the evaluative process of a field that we think will help punters in the first couple of weeks back of steady pari-mutuel action:

1. Pay attention to those qualifying races. We continue to think that the qualifiers, without requiring a horse to do much other than meet the local standard of time while staying errorless, are the best sign possible into a horse’s current form after an absence.

The public, of course, will be looking for horses who were successful in their qualifying attempts, and they will also hold in high regard horses who set the pace and didn’t miss by too much. About the first group, we would prefer that those horses come from stables who have shown winning trends in other qualifying events (such as the Burke Brigade in Ohio is exhibiting), and be careful that other winners aren’t being over-bet, especially if the trip wasn’t especially taxing.

About the second group, we would have more caution, since the horses’ races figure to go faster than their qualifiers – if they couldn’t hold up in an easier situation, the conditioning they gained may not be offset by the tougher job they are given to do. One exception: if the horse set the pace or moved to the lead, and then was caught by a horse who is much more “classy,” especially in a fast back pace, the loss of ground can be forgiven. If a good horse (especially an “unknown”) from a hot barn/stable is the only thing which prevented a horse from winning, that horse can come under serious consideration.

The type of horse we prefer coming off qualifiers are those who finish strongly, even if it took them awhile to get into the race. The “fast last quarter in qualifier” angle is one of the soundest ones we have run across, as it shows a horse who can produce at “crunch time” and may still have more improvement left in him. Unless he is overbet, you can get surprising mileage out of this type of horse.

2. Try to discover early “trends” as quickly as possible – before the crowd catches on. Trying to figure out which are the likeliest early paths to victory is a big advantage, with perhaps the most notable trend being the winning stable (such as the Burke horses mentioned above). Also, watch the first couple of races on a given day to see if speed is holding up well, or whether come-from-behind horses have the edge. The former can be uncatchable during the prime of a warm season, but don’t toss out that stretch hard-charger if several similarly-styled horses have already done well on that day.

If your program carries the driver and trainer statistics for the present year next to the individual’s name in the past performances, be sure to make frequent excursions to the front of the program after the first couple days of the meet, as there is where you often will find the stats for the current meeting. A horseman who built up impressive numbers at a smaller track or while racing months ago isn’t necessarily the one you want behind your pick or picks as racing is in reemergence.

When I was at Northfield in the 1980s, on July 1 there was one trainer/driver who showed 200 starts and 46 victories. If someone just coming to Northfield for wagering opportunity saw those stats, they might give extra points to the horseman showing a 23 per cent win rate. They, however, wouldn’t have known that the horseman, after 100 starts, had 42 victories already – and thus really won only four races in his next 100 starts. A recent (while representative) patch of past performances are the most likely keys to cashing tickets – don’t be fooled by stale data.

3. Horses (especially) and horsemen with a longtime history of local success can sometimes be susceptible bets. “Name performers” at a local oval will often attract betting attention based on reputation. But, if these individuals, horse or human, are drawing dollars not on recent established form, but on those reputations, they are likely to be underlays, and your attention may be better shifted to someone who approaches today with demonstrable recent encouraging signs – their “non-reputations” up until recently could grow quickly, and you want to be there first, while the public is still mired in previous achievements not relevant to the fact that we are racing today.

Along those lines – if a horse has had an excellent start or two back for a purse, and is today faced with a first-time returnee with back class, the recent achiever certainly will get the edge in price, as the sharpie will be stepping up in class and thus may be a bit longer on the board than he should be. If you’re getting attractive odds – or if the Exacta either way is an overlay – you have a possible opportunity for profit. (Check those monitors for Double and Exacta overlays!)

4. Practice on any tracks opening ahead of your circuit. Re-familiarize yourself with the basics of understanding the races; try to recalibrate some sense of proportion among the classes, especially with the horses dropping down in class; watch and learn to identify trends. Golfers usually go out and hit a couple of buckets of balls before they begin a particular golfing season; this would be the harness equivalent. Keep your expectations – and your investment – within a comfortable range.

Many of you reading may be thinking that you knew a good bit of this already. But we’ll finish out with a point most people have never considered about “tightness” coming back to the betting scene:

How did I do off a “layoff” last year, or in recent times?

My basic handicapping job is to produce a tip sheet, “PHILLY’S FINEST,” for the Harrah’s Philadelphia meet. I evaluate the fields, make a semi-intelligent guess what the off-time odds will approximate, and try to give the readers the horse(s) I think will be “best value,” the one most likely to yield a profit in the long run. Some races you just have to accept that a favorite is unbeatable; other times, you try to take a shot against a vulnerable chalk with a horse who may have more in the tank than the crowd may guess.
Evidently I didn’t listen to that last sentence when the 2019 racing season at Philly started, because these were my statistics for the first 21 cards of the racing season:

My attempts to beat the favorite with trotters and pacers at some odds early on in the 2019 Philly season were obviously abysmal, including NO winners out of 47 selections going off at 5-1 or more. I did have a small profit range with horses who weren’t really heavy favorites or who were well-regarded non-favorites, but my picks weren’t so great in the other categories, and I had a very bad ROI (return on investment) of -25 per cent to start the meet.
So I go back, look at these statistics, resolve not to be so speculative with longshots against favorites in starting back up, and I should do better, right?
Well, I didn’t make any adjustment (at least not consciously) during 2019, and this second chart tells the story of a turnaround in fortunate finishes:

What conclusions do draw from these numbers? Was I desperately unlucky at the beginning of the 2019 meeting, and should I stay with the mindset that allowed me to do fairly well the rest of the year?

I think not, though I won’t make a major change – the numbers seem to indicate that I do better once form has been established and a circuit is under full steam; in addition, those numbers were pretty good for a player who did not have the benefit of raceday scratches, raceday driver changes, raceday biases, and raceday actual odds. But the inability to get early good-priced winners will probably incline me “as the starting gate pulls away” to really study the times when the choice comes down to a favorite vs. a mild longshot, and probably I won’t be as swashbuckling as I was early in 2019. I won’t take bad value, but maybe the mid-contenders won’t appear so rosy through the glasses of analyzed numbers from last year.

I am reading a book about football/soccer called “Everything You Know About Football Is Wrong.” It is a call to apply modern analytic techniques to a game where a manager’s opinion, with all its biases, should be de-emphasized, and actual data, minutely recorded during the actual games, should be the guiding force for a team. The book says that the player who can score the second goal in a given match for his team can be more valuable than the player who leads the team in goals, and it mathematically shows you can get more points in the standings if your team posts a shutout than if they score anything fewer than three goals – it says that defense and defensive players are underrated.

The point from the book I’d like to leave here at the end of this piece is that there is NO ONE WAY TO SUCCESS. Depending on your bankroll, your skills, and your strengths and weaknesses, there are many paths a football/soccer team can travel to become successful, in absolute or relative terms. And it’s the same in harness racing – you have to establish in your own minds what principles and values help you best. We hope to have laid out a couple of factors that may deserve extra emphasis early in the handicapping season. The fun of the game is to now take this information, apply it – and enjoy yourself.