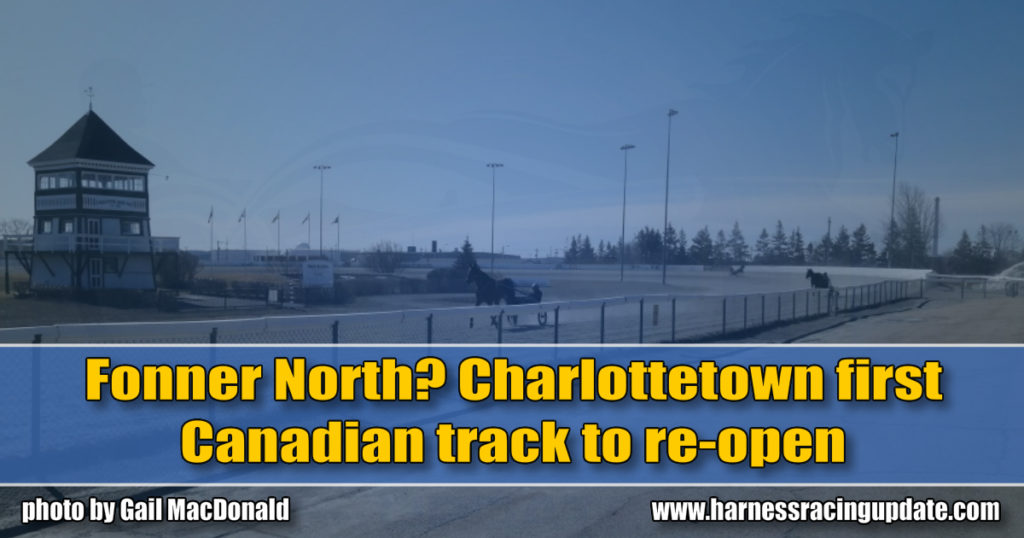 Prince Edward Island is Canada’s smallest province, but with an out-sized love of harness racing disproportionate to its land mass. It is also fortunate to have had only 27 residents diagnosed with COVID-19 since the pandemic crisis began — all have recovered. Red Shores racinos in Charlottetown and Summerside are far removed from densely-populated urban centers where the deadly virus has taken strongest hold. Tracks in those regions have now been unable to play host to live cards for over two months.

On March 12, Yonkers announced that live racing was on indefinite hold following the March 10 death of John Brennan, the track’s Standardbred Owners Association of New York field representative. (Brennan had been diagnosed with COVID-19, in addition to underlying health conditions). The Meadowlands postponed racing from March 13 onward because of safety concerns. Woodbine Mohawk Park and The Raceway at Western Fair followed suit March 19. When Cal Expo was abruptly shut down April 1, it was the last North American harness track still racing through the widespread crisis.

Far from being dormant during stay-at-home orders and the lull in North American harness racing, the Atlantic Lottery Corporation-owned tracks stepped up their brand’s online content: Livestreaming of horses jogging and training has proved popular on the track’s website, as have weekly “Virtual Tack Room” chats featuring racing historian Jerry McCabe and simulcast hosts Lee Drake and Peter MacPhee. The trio have been chatting with guests such as Hall of Fame reinsman Wally Hennessey and Meadowlands announcer Ken Warkentin each Saturday night, with all participants taking part safely via webcam.

May 8, Red Shores management announced the Charlottetown track surface would be graded and conditioned for upcoming race dates: From Tuesday, May 12 to Friday, May 15, it was largely closed to horses and horsepeople, in preparation for an unusually high-visibility season opener. Concerns about idled horses being ready to start were answered by the release of four qualifying dates: Saturday, May 23 at 12:30 pm; Thursday, May 28 at 6 pm; Saturday, May 30 at 12:30 pm; and Sunday, May 31 at 12:30 pm. (All times Atlantic.)

Adam Walsh is Red Shores’ racing experience manager. He said PEI reopening dates were decided independently from what was happening in other racing jurisdictions.

“It was never an intention to be the first to announce as the first harness track to re-open for live wagering in North America,” he told HRU. “The plan was to work with the racing community in PEI and get the equine athletes back as soon as we could, while following any provincial guidelines around COVID-19. We have been very fortunate in PEI to have a small amount of COVID-19 cases, and the PEI government and PEI Chief Health Officer [Dr. Heather Morrison] have done a great job in controlling the virus, which has allowed us to get back to racing June 4th while adhering to guidelines in place.”

Racetracks with backstretch stabling have found themselves better equipped to handle the first stages of the pandemic-era comeback. “There are currently around 250 horses stabled on the grounds at Red Shores Charlottetown,” said Walsh. “Racing will not be restricted to only these horses once live racing starts. We will allow ship in entries from Island-stabled horses, [but] horses from outside the province are still not solidified as inter-provincial travel currently has restrictions in place.” Fortunately, short fields shouldn’t pose a problem, and local horses shouldn’t come up short at the end of their miles. “The horse population is quite healthy. The animals have had an extra month to prepare for live racing and the trainers have really been able to get their equine athletes in top condition.”

The Maritime provinces’ top track is popular with bettors every Old Home Week, when the Gold Cup and Saucer brings international attention to PEI. This year’s edition of the race will go ahead, albeit without typical trackside crowds. “The Provincial Exhibition has announced that the Old Home Week activities that include the midway, horse shows, and agriculture displays have been cancelled for 2020, but this does not impact the harness racing events scheduled from August 13th to August 22nd including the Guardian Gold Cup and Saucer,” said Walsh.

PEI will even play host to another marquee invitational this season: In a May 12 media release, Red Shores manager of marketing and brands Lee Drake stated that while the Summerside Lobster Carnival has been cancelled, “this does not impact the harness racing events scheduled from July 5th to July 11th including the Governor’s Plate at Red Shores Summerside.”

For now, only essential personnel will be permitted to attend the qualifiers and pari-mutuel races.

“Red Shores is expecting to see our online viewership increase,” said Walsh. “We know there is a large appetite out there for people to see how the horses have prepared for the upcoming season, and really horsepeople from all over North America and beyond tune in.” He confirmed that their signal will again be available on Canada’s lone legal ADW site, Horseplayer Interactive, as well as “over 23” American ADWs, including TwinSpires, Xpressbet, Watch and Wager, and NYRA Bets.

The big question, at least before Woodbine Mohawk Park, Scioto Downs, Northfield Park, and Hoosier Park announced their reopening dates this week, was whether Red Shores Charlottetown might become “Fonner North”: a physically-small, high-attendance, moderate-handle operation suddenly thrust into the spotlight, like Nebraska’s Fonner Park thoroughbred track. Racing without on-track spectators, while implementing COVID-19 safety measures like face masks and physical distancing, Fonner Park achieved unexpected prominence and record-shattering handle increases because of its ability to keep racing through March into May, when major North American tracks (aside from Gulfstream Park) remained closed.

With a limited number of standardbred tracks confirmed for imminent race dates, it’s still likely Red Shores Charlottetown will gain new bettors and fans. New York, New Jersey, Pennsylvania, Alberta, and all Ontario tracks have not yet resumed due to health precautions, and many have been hit hard by the loss of casino game revenues.

“The low rate of COVID here [in PEI] played a major role on our decision, and in particular the approval, to race,” said Walsh, adding that there have been no changes to purses at this time.

Handle has been growing at Red Shores Charlottetown — a 10 per cent increase in total 2019 over 2018 handle, with a 15 per cent increase in online-generated handle. Like Fonner Park, the Island track ordinarily benefits from significant food and beverage sales at its popular grandstand restaurants, and is now counting on its center-stage ADW presence to keep the local sport thriving through difficult times. Walsh said that the particulars on staying safe while racing will soon be made public: “Red Shores will be releasing a document Friday May 15th that will outline the new protocols that will be in place for people that will be participating on race days. We will have hand washing and hand sanitizing stations in place and social distancing will also be in place. Stay tuned for the full details.”

He agreed that even with limited attendance, the track’s all-time best handle could soon be surpassed by harness horseplayers seeking North American action.

“Yes, I believe that we should be able break this record,” he told HRU. “We have a very strong racing industry here in PEI and a professional Race Day Show. The PEI harness racing community and our equine athletes always put on a great show for our viewers.”

Incidentally, that record handle of $391,031 (Cdn) was set on the night of the 2017 World Driving Championship final at Charlottetown, with bets coming in from across Canada, Australia, New Zealand, and the United States. With few rival venues competing for wagering dollars June 4, Red Shores could become Fonner North, if only for an equally unpredictable moment in time.

View a combined feed of camera 1 and 2 here.