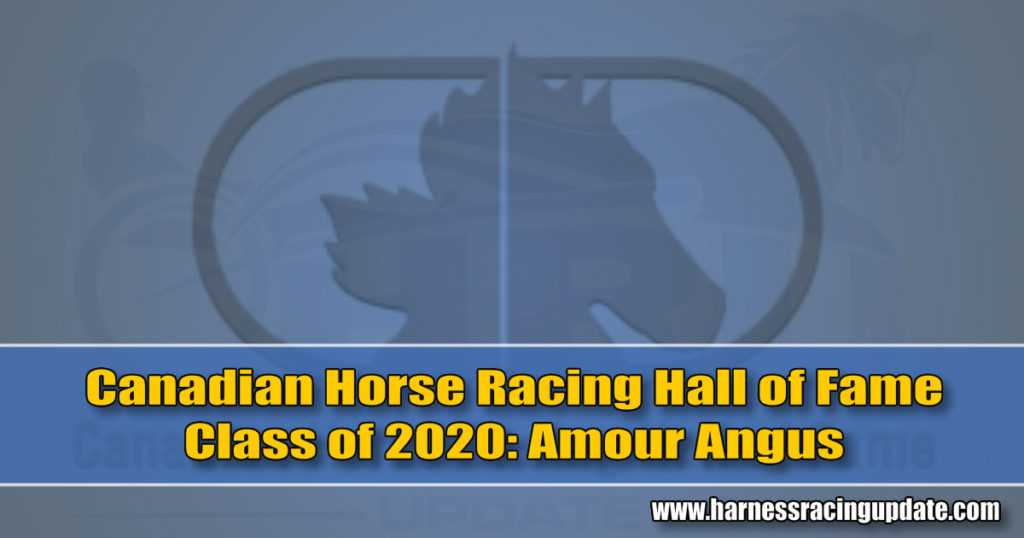 In a week of predominantly grim news, 87-year-old Pierre Levesque got a welcome pick-me-up at his home south of Montreal in Quebec’s Eastern Townships.

Amour Angus, the most celebrated horse ever produced by his now-defunct standardbred breeding operation Angus Farm, soon would be joining him in the Canadian Horse Racing Hall of Fame, elected as part of the class of 2020.

“I’m proud, naturally. It showed what we were capable of here in Quebec,” said Levesque, inducted himself in 2008 for his pivotal role in the sport during its heyday in the province from the 1960s to the 1990s.

Bred and foaled at the farm he once owned in Bedford, QC, Amour Angus was an ordinary racehorse transformed into an extraordinary broodmare when matched with stallion Garland Lobell, producing an all-star roster of trotting siblings that included filly Emilie Cas El (Canada’s Horse of the Year in 1994 and dam of 2014 Hambletonian champion Trixton) and stakes-winning colts Conway Hall, Angus Hall and Andover Hall, all of whom became successful and impactful sires. Angus Hall also is in the Canadian Horse Racing Hall of Fame.

Amour Angus, who died in 2009 at age 22 after fracturing a hind leg, has been in the U.S. Hall of Fame since 2008. Despite her distinctly Canadian roots, it took another decade for similar recognition to be bestowed in her native land.

“It wasn’t the money, it was how I viewed the future. When I saw the casinos come into Quebec (in 1993), it was obvious who the government favored. We had a viable industry, with great horsemen and 2,000 broodmares, but my dad used to tell me, ‘You can’t fight city hall,’ and I could see the trouble coming. They didn’t want competition. It was not going to work. And the horsemen were indeed left impoverished.”

At one time, Angus Farm had as many as five stallions and 80 broodmares.

Magna Force, the sire of Amour Angus, wasn’t one of the big names. Levesque stood the former Billy Haughton trainee under a lease arrangement and decided to try him with one of his mares, Kenwood Scamper, a $20,000 (U.S.) yearling purchase in Harrisburg who’d been injured in a fall before making it to the races.

The resulting filly, born in 1987, had some talent and actually won a Quebec Sires Stake at the former Blue Bonnets racetrack for Levesque as a 2-year-old. But an injury limited her effectiveness and she was retired after her 3-year-old season with $21,355 in career earnings and five wins in 16 starts.

Bred to stallion Garland Lobell, a future Hall-of-Famer then based in Quebec as well, Amour Angus produced a filly that would sell at auction and race for trainer Dustin Jones under the name Emilie Cas El and go undefeated in 13 starts at 2, earning Canadian Horse of the Year honors.

“Dustin used to be buy quite a lot from me. He’d told me he wasn’t really interested in trotters that year, but he ended up getting her. It helps when they go to good trainers,” Levesque said.

Alan Leavitt of Walnut Hall Farm called Levesque the next year, asking whether Amour Angus might be available.

“The morning he called, my mother had just died. I said it wasn’t a good day. He said he understood and would get back to me in a month. And he did,” Levesque said.

Leavitt has described Amour Angus as “perfectly proportioned” but he purchased her sight unseen, Levesque said.

The foal beside her wasn’t part of the initial deal, but Leavitt persevered and the colt was included by the time the truck arrived to take her to her new Kentucky home. The baby — her fourth — would be renamed Conway Hall. The foal Amour Angus was carrying turned out to be Angus Hall. Andover Hall, her seventh foal, came along three years later.

Levesque remembers telling his accountant at the time of the sale, “we’ve just sold the best broodmare in Canada.” In hindsight, he could have said one the best anywhere, ever.