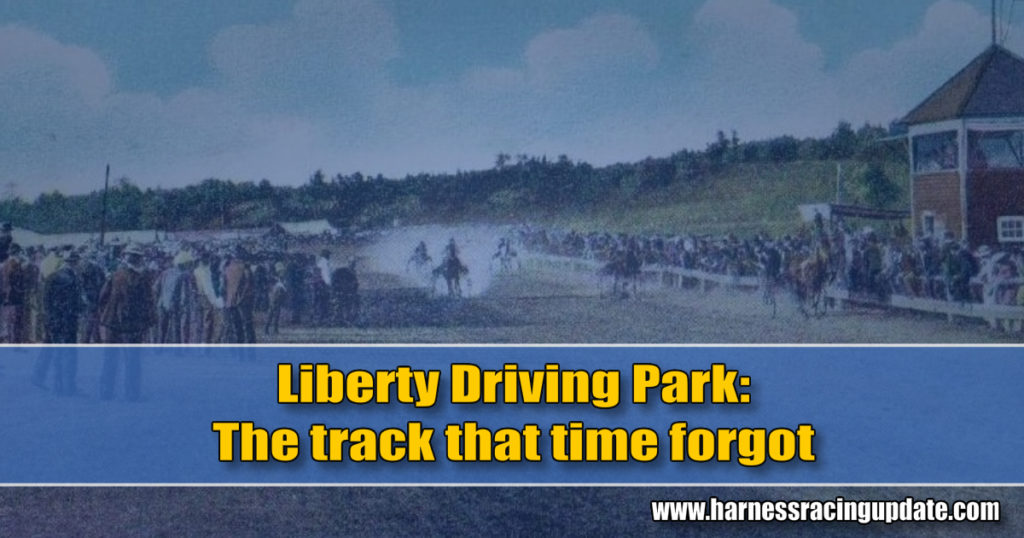 There once was a harness track in my backyard.

So how, exactly, have I written about harness racing all my life and not known about a racetrack that was just a mile away from my house?

Two reasons: The track operated for several years after opening in 1902, and while I admit to being old at 67, I’m not that old. Secondly, Liberty Driving Park is the track that time forgot.

Liberty, NY, 90 miles northwest of New York City, is in Sullivan County, the heart of the Borscht Belt, also referred to as the Catskills, a summer destination for New York City, Long Island and New Jersey residents. Those who could afford to stayed in lavish hotels, such as world-famous Grossinger’s just outside Liberty. At its peak in the 1950s, Grossinger’s 35 buildings over 1,200 acres served as many as 150,000 guests per year. It was the first resort in the world to offer artificial snow for skiers, and its ice rink was the site of the World Barrell Jumping Championships covered on TV’s Wide World of Sports.

Other prominent hotels in the area included the Concord in Kiamesha Lake just outside Monticello, Kutsher’s outside Monticello and the Nevele in Ellenville. Lou Resnick, a native of Ellenville, co-owned world champion Trotter Nevele Pride with Stanley Dancer. The Nevele is the backward spelling of eleven, which was the number of mineral springs in Ellenville which attracted health-minded tourists.

At one time, there were well over 100 hotels in the Catskills in its peak in the 1950s and 1960s. Dozens of famous comedians got their start in the Catskills, including Jerry Lewis, whose favorite hotel, Brown’s, was near Loch Sheldrake five minutes from Liberty.

Less affluent tourists would flock to hundreds of bungalow colonies throughout Sullivan, Ulster, Duchess and Orange Counties. As I grew up, the population in Liberty of 4,000 to 4,500 would swell to tens of thousands between Memorial Day and Labor Day. My family’s Triangle Diner right opposite the entrance to Grossinger’s was one of the beneficiaries.

Finding activities for all those visitors helped create Monticello Raceway, which is where I got my first taste of horse racing, a wonderful addiction that shaped my career and my life.

I had no idea that when Monticello Raceway opened, June 27th, 1958, it was more than a half-century after Liberty Driving Park closed.

The impetus for opening Liberty Driving Park was the same one as the reason for creating Monticello Raceway. A group of hotel and boarding house owners looking for entertainment for their guests formed the Liberty Driving Park Association in 1901. J.C. Young was the president.

The group purchased 40 acres of land, a portion of a farm owned by Harley Young, one of the first settlers in the area.

Construction of the track began on Oct. 10, 1901, and finished in the summer of 1902. The track became part of the Hudson and Mohawk Valley Circuit. Horses occupying the 10 stables came from Albany, Utica, Elmira, Poughkeepsie, Binghamton, Rome and Schenectady.

In April, 1903, the stables were increased to 50 and grandstands were enlarged to handle as many as 1,000 people. According to the Liberty Register newspaper, 2,500 people watched racing the afternoon of June 5, 1903. Most of the fans came from the hotels and boarding houses in the area.

A post card of the track, featuring the photo of a race in progress taken by Otto Hillig, whose studio was in Liberty, showed an actual race on Aug. 18, 1904, and listed entries for three races, one with six horses and a pair with seven. Fans are lined up watching the race from both sides, the infield and the grandstand area. Several local advertisers had ads on the race page, including Howard Hats and Walkover Shoes, Lake Olympia, the New York Ontario & Western Railroad offering special excursions to the World’s Fair in St. Louis, Missouri; Dreamland, Liberty House and Mansion House and Blossom Club.

Financial problems shuttered the track after several years, and the property was sold to Sullivan County National Bank by a foreclosure on Aug. 28, 1911.

In March of 1936, Willie Tuchman acquired the property and built a farm, one he and his family lived on until 1964 when Grossinger Realty Corporation purchased the property, using it to develop a portion of the hotel’s golf course. One of the long, narrow stables at the track survived and was used as a maintenance building for the golf course.

Liberty native Bobby Gerow, whose family owned a gas station in Liberty, remembers hearing about the track when he was a teenager. “When Grossinger’s was planning on expanding its golf course, my Uncle Tom showed my cousin Muggs and me where there had been a racetrack,” he said. “Muggs and I were about 14 or 15. The track was somewhere near the area around the fifth, sixth and seventh holes, where there was a little lake. That’s all I knew about the track.”

The Catskills began to die through the ‘70s as people found bundles of other options for their vacations. Where once there were more than 100 hotels, now there are fewer than 10.

Though Grossinger’s Hotel closed in 1986, its golf-course stayed open until 2017. The clubhouse was demolished in 2018.

But there was a track there once, a track that time forgot.