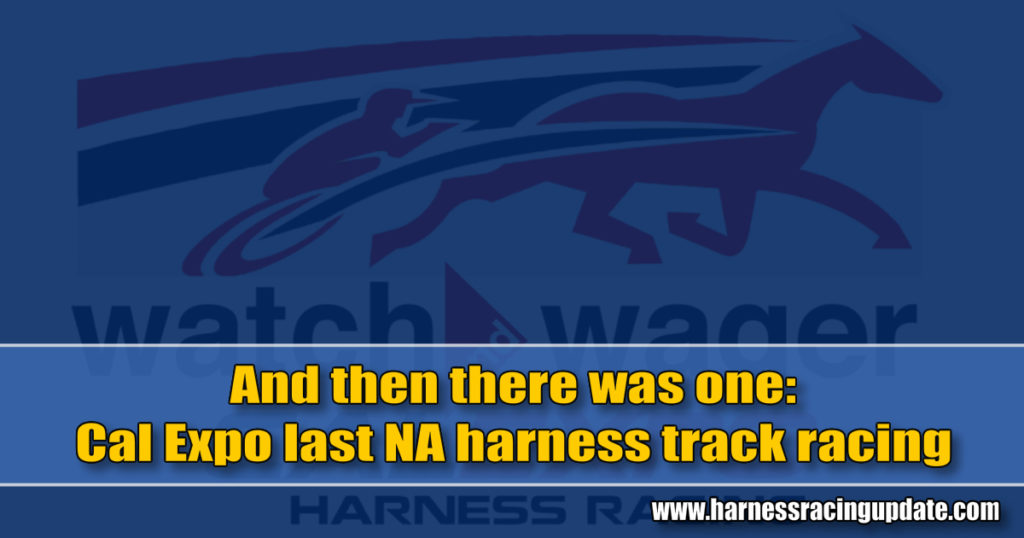 And then there was one

Cal Expo the last NA harness track racing in the midst of the COVID-19.

There’s only one left.

Cal Expo has received permission from state officials in California to continue racing and will try to finish out its meet, which is scheduled to end April 25.

Saratoga Harness is scheduled to race today, but has announced that it will close up afterwards, the latest track shut down by COVID-19. Starting Monday, Cal Expo will be the only North American harness track still operating.

In an effort to maximize handle, Cal Expo will race on Tuesdays and Wednesdays with a first post of 3:05 Pacific Time. In that slot, it will be the only U.S. track of any breed racing and will have the simulcast market all to itself.

“That they’re still racing, that is really good news for us,” said trainer Bobby Johnson. “We’re like everybody else. If they shut us down, we’d all go broke. There‘d be no income.”

Cal Expo’s immediate future looked to be in jeopardy when California Governor Gavin Newsom issued a “stay at home” order Thursday telling the state’s residents that they should remain indoors. On Friday, just an hour before the scheduled first race at Santa Anita, the Stronach Group, which operates Santa Anita and Golden Gate Fields in the San Francisco area, received permission from the state to continue racing. Along with Del Mar and the Thoroughbred Owners of California, the thoroughbred groups convinced Lourdes M. Castro Ramirez, secretary of California Business, Consumer Services and Housing Agency, and to the California Horse Racing Board that it was feasible to continue racing.

Their primary argument was that even if racing shut down the horses would still have to be exercised and the backstretch employees would still have to come to work, which meant that racing the horses in the afternoon would not create any additional dangers. Cal Expo and the Los Alamitos quarter horse track were lumped in with Santa Anita and Golden Gate when approval was given to continue racing.

When Cal Expo raced Friday night, every precaution was made to keep the trainers and drivers safe. General manager Chris Schick said that no one was able to enter the paddock until their temperature was taken and one person, whose temperatures was 101 degrees, was told to leave.

“We’re practicing the social distancing and following all the guidelines from the CDC (Center for Disease Control) and all the state guidelines,” Schick said.

Last week, a number of thoroughbred tracks announced that they would be closing due to COVID-19. The list included Keeneland, which announced that it would not be running its spring meet and that it had canceled the April 2-year-old sale held there. On Saturday, the tracks running beside Santa Anita and Golden Gate were the Fair Grounds, Charles Town, Oaklawn, Sam Houston, Tampa Bay Downs and Turfway Park. Shortly before starting its card, which included the $1 million Louisiana Derby, Fair Grounds announced that it would cease racing starting Sunday.

Even though there was little competition for the gambling dollar on Friday, the Cal Expo races did not produce a good handle. Schick said that $668,000 was bet on the card and that, normally, the Friday night handle is about $800,000. He said the problem was that California’s off-track betting network was closed down and that it normally yields between $350,000 and $375,000 in handle.

“We are operating under a totally different model with no California handle,” Schick said. “The dollars we get vis a vis a vis home wagering from outside California produce a much smaller percentage than the money bet in California. We need way more dollars to end up somewhere close to the same place.”

Schick hopes that problem can be solved by moving to Tuesdays and Wednesdays.

“We’ve talked with TVG and there is absolutely no track racing at those times,” he said. “We’re going to hop into that slot. We need way more handle to survive.”

Schick said plans are already being made about what to do with the horses on the backstretch once the meet is over. Normally, the barn area closes about a week after the season ends, but Schick realizes the horses may have nowhere to go.

“We’re prepared to keep the barn area open as long as (the California State Fair) will let us,” he said. “Our number one concern right now is helping our horses and our horsemen.”