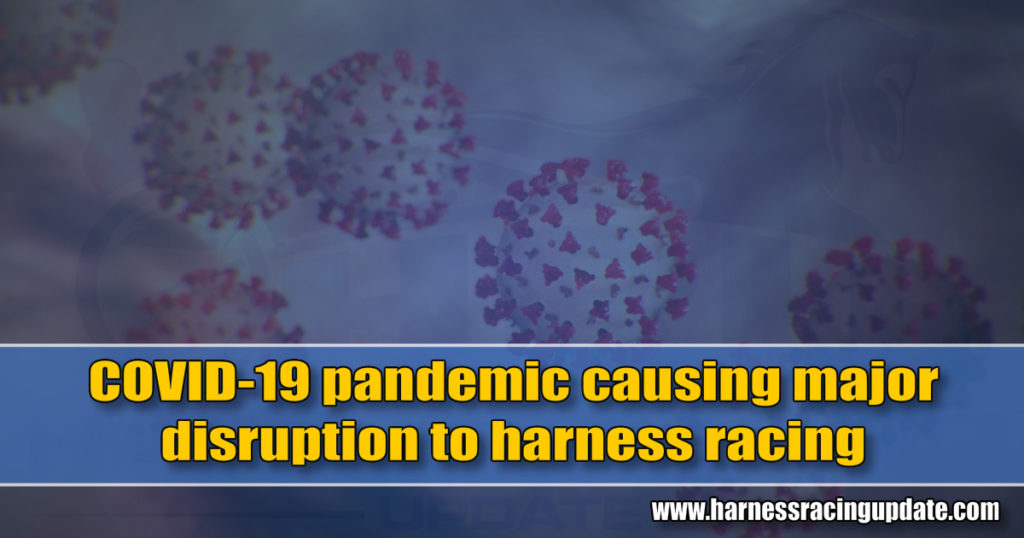 This fact may be revealed most clearly through a chart that appears on the Cal Expo website (full story here), listing all the tracks that are on temporary hiatus from live racing. Prior to Woodbine Mohawk Park and The Raceway at The Western Fair District announcing closures, a check showed 15 such harness facilities in the United States and Canada, and a 16thhad not yet been posted when we checked Thursday morning – Saratoga Harness, which had been operating in a studio racing mode, announced their last card for the time being would be the Sunday program. Pompano Park joined the list after their program on Wednesday evening.

Thoroughbreds, greyhounds, and even jai alai are being affected by the pandemic. Racing has been shelved temporarily in five entire countries, according to the website: France, India, South Korea, the United Kingdom, and Uruguay.

We contacted the harness tracks that were still in “studio racing” mode. The people we spoke to were knowledgeable people, but were reluctant to say anything on the record, recognizing the dynamics of the situation. A few racing offices referred commenting to publicity or other departments. So no names are to be used in this story, but the facts, as known at press time, are public, backed up by computer resources and overnight sheets.

It is again to be emphasized that the developing situation may cause different management decisions and a different path in the racing of horses, but that what is listed here is factual at press time.

Northfield Park, just outside Cleveland, has drawn cards into next week. Their condition sheet specifies that horses “may lose preferences” to “locally-trained” horses, and the track did receive quite a few inquiries after the initial wave of temporary live racing suspensions started, but they have used very few “outsiders,” and only to fill classes which did not fill with “local horses.”

Miami Valley, between Dayton and Cincinnati, conducted qualifying races Wednesday afternoon. They have drawn for cards out until Monday, but stated that with the “fluidity” of the current situation, live racing’s status would remain “day-to-day” depending on public safety – the prevailing sentiment.

Rosecroft, just outside Washington DC, conducted racing on Wednesday and plans to on Sunday. Their condition sheet clearly states that “due to the coronavirus, entries will be limited to horses who raced at Rosecroft in their last start, or who have Maryland preference” (sired, owned, bred, foaled). Racing twice a week, they have been able to fill their cards; they had a few inquiries from connections racing at other tracks, but stick to their rule.

Spokespeople for Cal-Expo were not available at press time. However, their meet is scheduled to end on April 25, five weeks from this weekend, and with the average distance between Sacramento and the three tracks mentioned above over 2,400 miles, combined with not knowing the end of local bans or any interstate transportation difficulties, it seems unlikely that they would be getting a number of shippers.

North of the border, both Woodbine Mohawk Park (outside Toronto) and Western Fair (west of central Ontario) continued the drawing of future races on Thursday, while taking “the cautious route” in speaking about anything any distance into the future. After being contacted, both opted to postpone racing effective March 20. Rideau Carleton (Ottawa, on the Quebec border) also drew on Thursday for a Sunday program.

Most of the tracks mentioned in this story and in a position to discuss the topic had noticed slight if any upturn in their betting from remote spots, the reduction of product from which to pick counterbalanced by simulcast facilities at racinos/tracks being closed, and people’s minds being on other priorities. Western Fair was an exception, posting record handle of $992,536 (Cdn) on Wednesday night.

The only “sure thing” about handicapping the races these days is that the picture is likely to be changing from day-to-day – and that harness racing’s most fervent hope is that the pandemic affects the minimal amount of lives possible, and that we as a sport can get back to our business – if not soon, then at least as soon as possible.