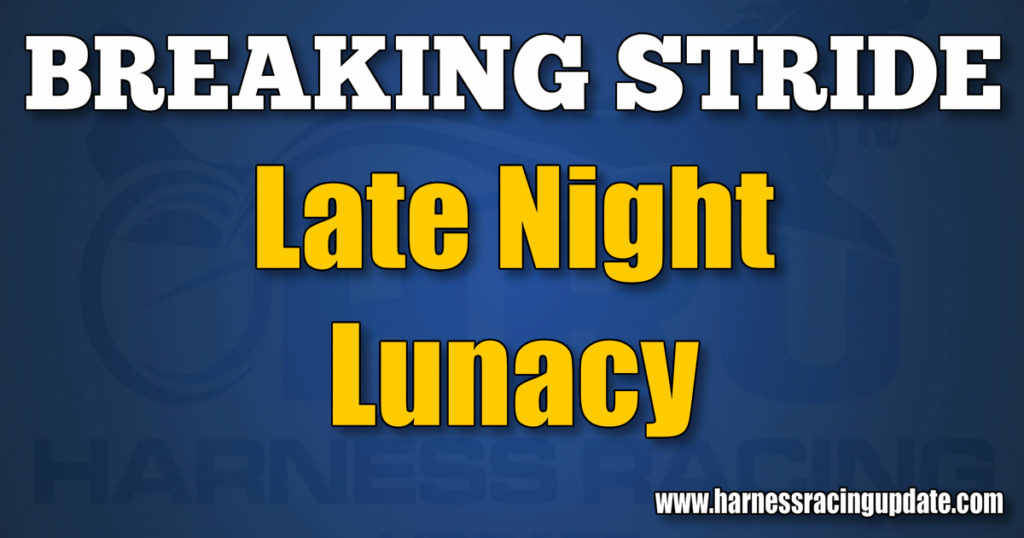 In the morning gloom of room 412 at the Hyatt Regency Hotel, I opened one eye. As I waited for the opening salvo of a hangover, fragments of the night before crawled into my brain — Breeders Association weekend, too many drinks, a smug stranger, loud talk, arguing and a wild wager.

How much was real?

Carefully, I slid one leg off the bed and risked opening my other eye. I felt a thud of pain in my head and a wave of nausea. After remaining still for 10 seconds, I slowly reached my left hand to the bedside table and snatched up a crumpled sheet of paper. I read the handwriting:

I, David Telasco, promise that I will bring a minimum of five new buyers to the next horse sale in Harrisburg, Pennsylvania and that those new buyers will spend at least $500,000 buying horses.

I replayed the evening.

We sat side by side on barstools. The guy next to me was thirtyish, wearing a blue golf shirt, jeans and boat shoes without socks. Fit, with short blond hair, he looked like an advertisement for a magazine layout.

Our first drink was in silence. After a few sips of our second round, the stranger swiveled his head and asked, “Business or pleasure?”

“I raise racehorses. Well, most years, just one horse. I guess you could call me a small-time breeder. The real breeders get together every year to bitch about how the market is going to hell. I was in the neighborhood and slipped in for free food.”

He smiled and extended his hand, “I’m David.”

“I make money, lots of money.”

I chuckled, “Cool, want to buy a horse for lots of money?”

We were off and running.

I stood on shaky legs, gathered myself, and then walked to the desk. Slowly, I lowered myself into a chair and opened my iPad. Five
minutes later, I knew the bet was real.

David O. Telasco was a billionaire. He was single (divorced) and 37 years old. He graduated from Duke and entered the venture capital game. His first big score was backing a small company that made medical supplies. He parlayed this with another success, a patented bandage that slowly dissolved on the patient’s skin. He was a noted business savant.

I closed up my iPad. The search proved that last night wasn’t drunken blather. Something happened. When I squeezed my eyes shut and tried to recall, events began to come back in little vignettes.

We were several drinks down the road, halfway between silliness and belligerence. We were both smashed. At some point in the festivities, my new best friend said, “Trey, my man, don’t get stinking rich. Money does not buy happiness.”

I think I replied, “Well, this bar tab is gonna be a monster, so if you pick it up, one of us will be happy.”

We laughed. We were at the stage of the evening when everything could turn into a laugh riot. Then we moved on to the phase where testosterone flowed. I remember one of my comments was suggesting, perhaps in a less-than-kind manner, “You just push around money, what you do is not real.”

He countered with, “Raising a racehorse isn’t going to solve world hunger.”

We came to the self-pity segment of inebriation when I said, “If more people don’t get interested in harness racing, I might be part of the world hunger problem.”

He grumbled, “Money is a curse.”

I said something ridiculous. On and on we went. Stupidity followed stupidity.

The actual wager remains fuzzy. I think it started when my new drinking buddy pointed his finger at me and loudly said, “I could sell horses.”

This boast irked me because he already said he didn’t know anything about harness racing. In fact, at some point, I remembered fumbling with my phone to show him a race because he had never seen one. After he watched, we got into one of those Scotch-propelled side roads. As usual, I began to boast and bemoan harness racing simultaneously. Voices got raised, and challenges were issued.

This morning, I blinked and again looked at the paper. I reread the scrawls thinking there was a good chance that we would never see each other again, and he would forget about our crazy wager.

David did not forget. I recognized him instantly as he walked down the aisle at the Harrisburg sale even though we had not exchanged a word since the evening of the bet.

He walked up to me, shook hands, and he said, “Trey, good to see you. Last time you were a bit fuzzy. Man, that was a night.”

I smiled and said, “Didn’t think you’d recognize me without red eyes and drool.”

“You are recognized and remembered. I still have my copy of our little wager. Unfortunately, you are about to lose a thousand dollars. There are six buyers here, and they will be spending money.”

“How do I know that you brought them?”

“They are first time buyers, acquaintances of mine, several from Seattle. They don’t know anything about harness horses.”

“So what did you do, bankroll them? Are you going to spend a million to win a thousand?”

“No. These people do not need bankrolling. They just needed a little shove.”

All I could do was muster a shrug. I pointed to a couple of folding chairs in front of a portable stall, and we sat down.

He began, “From time to time, those of us in the venture capital world enjoy getting together. When we do, we are just like everybody else, goofballs, snobs, slobs, and geeks. But at some level, most of us want to have fun. For a lot of us, having fun is having a challenge. We are risk-takers.”

I just spread my hands and gave another shrug.

He continued. “Two months ago, at a retreat on Maui with about 20 of us, I pulled out a trophy and handed out iPads with the sales catalog for this auction pre-loaded.”

I said to my cronies, “They are selling more than a thousand baby horses at this sale in Pennsylvania. The way it was explained to me, some of the horses in the sale will eventually race and make money. I’m running a simple contest. You can spend up to $200,000 buying horses. After you buy them, you send the horses to a trainer; I have a list. You will want to touch base with them before the sale. It’s straightforward — at the end of October, the player whose horses make the most money wins this trophy.”

Finally, I found my voice, “They went for this?”

“Five of them, plus myself. We named ourselves the 2020 Racing Guild. It’s an ego thing. We are all starting from the same spot in this weird sport, We all think we are the smartest one in the room, and we all figure we will find a way to win. Besides, it’s completely new to us, racing and buying horses. You would be surprised how boring having money can be.”

“David, I find this hard to believe.”

“Why? It’s a challenge. I guarantee you that the other Guild members began digging into harness racing that night in Maui. They have been making calls and getting up to speed on your game ever since. You will be amazed at what quick learners these people are and the approaches they will take. They are fearless. And by the way, it’s intriguing, the breeding and staking and all that.”

I said, “You folks will be bidding for horses against horsemen who have done this all of their lives.”

“Not really, the Guild members are playing against each other. My people are not naïve. They grasp concepts, crunch numbers, ask the right questions, and have people that find the right answers. Hell, maybe you should be worried about one of these folks taking over your entire industry if they see a way to make money.”

One of the grooms led a filly out of the stall. David watched intently.

I asked, “Is this legit? Are you are really in this contest?”

He nodded, “Got a trainer, got my list of yearlings, and my checkbook. I’m ready to rock.” He handed me the list. I scanned it. There were ten yearlings; among them was the yearling I had in the sale.

He asked, “Do you have your copy of the wager?”

I took it out of my wallet and handed it to him. He ripped the note into four sections and stuffed them into the front pocket of his jeans.“So tell me about your yearling. Does Trey have any inside information?”

I smiled, “Isn’t that cheating?”

He shook his head no, “Let’s call it data research.”