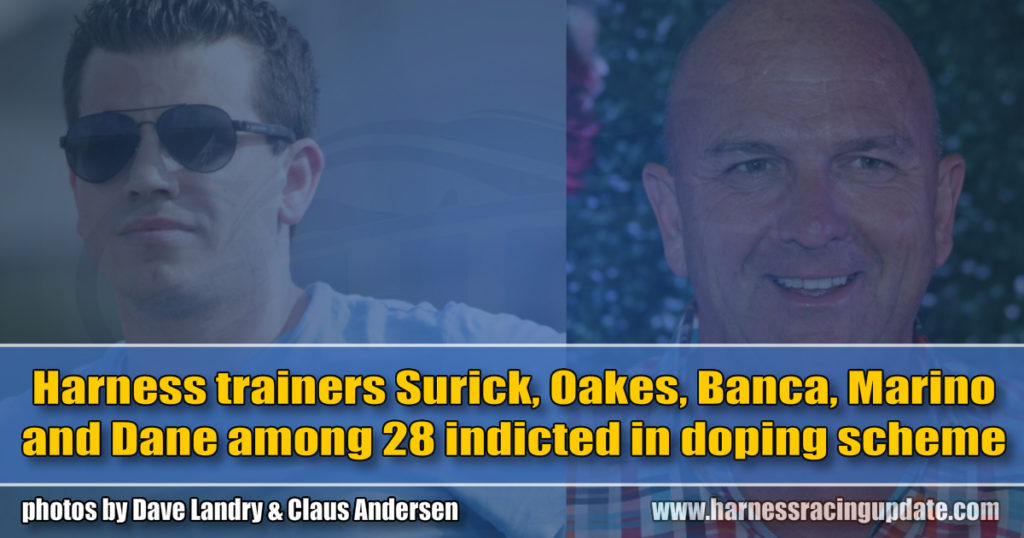 The indictments, issued by the U.S. Attorney’s Office for the Southern District of New York and aided by the Federal Bureau of Investigation, go to the highest levels of the thoroughbred and standardbred industries.

In a bombshell development that rocked the standardbred and thoroughbred racing industries, 28 individuals were indicted March 9 and 11 by the U.S. Attorney’s Office for the Southern District of New York in what law enforcement officials called a “widespread, corrupt scheme by racehorse trainers, veterinarians, performance-enhancing drugs distributors and others to manufacture, distribute and receive adulterated and misbranded PEDs (performance enhancing drugs) and to secretly administer those PEDs to racehorses under scheme participants’ control.”

None of the allegations have been proven in a court of law.

While most of the attention was focused on two high-profile thoroughbred trainers, Jason Servis and Jorge Navarro, the indictment extended into the world of harness racing. Trainers Nick Surick, Chris Oakes, Chris Marino and Rick Dane Jr. were among those indicted on March 9 for offenses ranging from doping their own horses to assisting thoroughbred trainers with their doping routines.

Two days after the original indictments were unsealed, it was learned that standardbred trainer Richard Banca had also been charged for his role in the doping scheme leading to speculation that there are more names to come.

“Today’s unsealing of four indictments for widespread doping of racehorses is the largest ever of its kind from the Department of Justice,” Geoffrey S. Berman, Manhattan U.S. Attorney said March 9. “These defendants engaged in this conduct not for the love of the sport, and certainly not out of concern for the horses, but for money. And it was the racehorses that paid the price for the defendants’ greed. The care and respect due to the animals competing, as well as the integrity of racing, are matters of deep concern to the people of this District and to this Office.”

The four harness trainers were arrested and released on bail. They will be arraigned March 23 in Manhattan. Surick has been charged with two counts of “Misbranding Conspiracy” and two counts of “Obstruction.” The maximum penalty for misbranding is five years’ imprisonment. The maximum penalty for obstruction is 20 years. Oakes, Marino and Dane were each charged with one count of misbranding.
Banca was the leading trainer at Yonkers so far this year with 42 wins, one more than Rene Allard. Like the others, he was charged with “misbranding.” He was arrested March 9 and released after posting a $200,000 personal recognizance bond. In a deposition, FBI agent Bruce Turpin testified that Banca’s property in Middletown, NY was searched March 9 and that the FBI found a number of illegal substances and handwritten notes with instructions on how to administer those drugs.

“I think the FBI did a great job,” said Meadowlands owner Jeff Gural, who has been at the forefront to end cheating in harness racing. “I commend them and the U.S. attorney for tackling this. I think it is a positive step forward. I think this will help. What I am hoping is that everybody joins forces and we get the feds to take this over. There’s no question we need federal intervention because the current system doesn’t work. Hopefully, this will get legislation in Congress over the finish line and the people who have been holding out to join in. That would be the best thing. Once the feds take over, I think they will do a good job.”

Gural said that Oakes and Marino were previously banned at the Meadowlands and that Dane and Surick were banned in light of the developments. Any horses that were entered by the four prior to the indictments were scratched Monday night at Yonkers (which was subsequently closed due to the COVID-19 pandemic). On Tuesday, the New York Gaming Commission announced the licenses of Oakes, Dane and Surick had been suspended. As part of the bail agreement, the court imposed the requirement that none of the trainers have any contact with racehorses without the presence of the third-party owner of the premises where the horse is stabled.

Much of the indictment is devoted to Servis and Navarro, two high-percentage trainers who were both widely rumored to be cheaters. Both are big names, particularly Servis, the trainer of Maximum Security, who crossed the wire first in the Kentucky Derby before being disqualified for interference and last month won the $20 million Saudi Cup. Maximum Security has been transferred to the barn of Bob Baffert.

But the indictment paints a picture of both trainers relying on a network of operatives in order to pull off their doping routines, operatives that include the harness horsemen.

Surick is a central figure in the indictment. In a particularly disturbing part of the indictment, an intercepted phone call between Surick and another defendant, thoroughbred trainer Michael Tannuzzo, Surick allegedly discussed his role in disposing of horses that died under Navarro’s care. “You know how many f – – – ing horses [Navarro] killed and broke down that I made disappear?” Surick is alleged to have said. “You know how much trouble he could get in… if they found out… six horses we killed?”

The indictment charges that he assisted Navarro by orchestrating a “scheme of covertly obtaining and administering adulterated and misbranded PEDs to the racehorse under his control.” In particular, Surick is alleged to have dealt with a drug called “red acid,” a PED designed to reduce inflammation in the joints.

He is also charged with using Viagra pills as PEDs, as well as Epogen.

The most serious charges levied against any individual are the obstruction charges faced by Surick, and they involve the standardbred Northern Virgin. Surick is said to have doped the gelding with Epogen only to face an unannounced out-of-competition test from the New Jersey Racing Commission (NJRC). Along with Marino, Surick allegedly concealed the horse from the regulators, telling them the horse had been shipped to Ohio. The FBI later identified the horse at a barn where Surick had been hiding him and conducted a test that revealed the presence of erythropoietin. The obstruction charges also involve charges that Surick altered, mutilated and concealed incriminating documents.

In December, 2018 the New Jersey Racing Commission issued a full suspension to Surick’s training license. The commission cited a “failure to cooperate with an ongoing investigation being conducted by the investigative staff of the New Jersey Racing Commission and for failure to appear for a hearing with the Board of Judges.” Eight days later and without an explanation from the NJRC, Surick’s license was restored to good standing.

According to the indictment, Oakes also played a major role in Navarro’s doping campaign. The indictment alleges that Oakes created and manufactured his own PED, described as a performance-enhancing “drench,” which is designed to “rapidly increase a racehorse’s performance during a race and to be undetectable.”

When Navarro asked Oakes about the risks involved with the drug, Oakes allegedly replied “Zero chance you get caught.”

Navarro’s top horses include the sprinter X Y Jet, whose wins include the $2.5 million 2019 Dubai Golden Shaheen in Dubai. Just prior to a February, 2019 race at Gulfstream Park, Navarro instructed Oakes to personally administer a PED to X Y Jet, and allegedly told him how to gain access to the horse. “Drive through,” Navarro said. “If anything, if they stop you. You are an owner and you come to Navarro’s barn.”

Dane is alleged to have helped create and market a variety of PEDs. The charges against Marino include his role in assisting Oakes.

Following the announcement of the indictments, United States Trotting Association (USTA) president Russell Williams released a statement, which read: “Having worked in the criminal justice system some years ago, I’m acutely aware of the presumption of innocence that applies from indictment through trial. At the same time, it’s essential to the administration of justice and to the health of our industry for anyone with knowledge of possibly illegal activity to cooperate with law enforcement authorities. It is imperative that our sport is conducted fairly and with integrity.”

Navarro has trained several thoroughbreds owned by harness horsemen, among them Oakes and Surick. He also trained thoroughbreds for Michelle and Al Crawford of Crawford Farms. They were not involved in the indictment.

“You meet Jorge Navarro and he talks about how he loves his horses and how he wants his son to get into the business, how he worked 15 hours a day,” Al Crawford said. “That’s the Jorge we knew. We would see him four or five times a year and that was when (stakes winning sprinter) Shancelot raced. That’s your experience with the individual. You don’t really know him personally so what you get is what that person wants you to get, just like a Bernie Madoff. He seemed like a really nice person.”