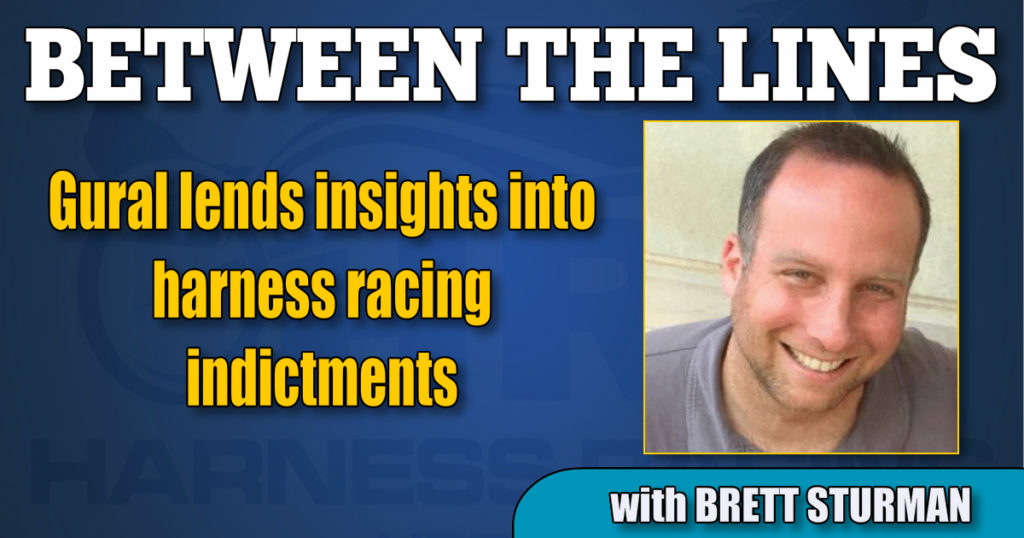 The Meadowlands owner has been at the forefront of trying to catch and eradicate the game’s cheaters.

Shockwaves were felt throughout horse racing earlier this week when 28 individuals across the thoroughbred and standardbred industries were indicted as the result of a two-year FBI investigation.

In the widespread doping scheme that involved trainers, veterinarians, drug suppliers and distributors, according to court papers, the two most recognizable names were thoroughbred super trainers Jason Servis and Jorge Navarro. However, the indictments are filled with
harness racing vets and trainers, almost all of whom were long alleged to be cheaters.

When Meadowlands chairman and CEO Jeff Gural stepped in and saved the track from imminent demise back in 2012, he made it his top priority to run a clean racetrack and not allow those he felt to be undesirable trainers to race at his property.

With regards to the feds coming in to finally do what racing had been unable to do itself, the question is how did it come to this? For Gural, the answer is easy.

“I think it’s very simple, no one cared,” said Gural. All it was, was lip service and they (industry participants) knew that in order to clean it up, it would cost a lot of money. And that drug testing wasn’t the answer, and that you had to do surveillance, wire taps, all of that stuff to catch these guys because they were ahead of the testing. And that’s expense, and no one really cared.”

Despite some inconsistencies here and there, Gural has been pretty successful at differentiating which trainers should be able to race at his track and which ones shouldn’t. That was born out in the indictments when notable trainers such as Chris Oakes, Richard Banca and Chris Marino had already been previously banned from participating at the Meadowlands. However, Nick Surick, the highest profile trainer listed in the scheme to dope – and his case, according to the indictment, spoke about horses being killed – had been allowed to race at the Meadowlands until the news broke this week.

I wrote about Surick 15 months ago when he was suspended by the New Jersey Racing Commission (NJRC) and subsequently the Meadowlands, only to be reinstated days later in a process that was shrouded by secrecy. As part of that investigation, the NJRC believed that Surick was giving his horses the drug EPO. What justification could there have been for Surick continuing to race at the Meadowlands?

“We knew Surick was a crook, so we’re not stupid. We were testing his horses, and we thought it was important to have someone racing where we could test the horses,” Gural said.

At the same time, my own inference from talking with Gural is that he knows there are training outfits racing at the Meadowlands many are suspicious of.

“To a certain extent we were testing the (expletive) out of those horses,” Gural said. “We knew we had people who were bad. But you get to a point where there’s no one left. We kind of said to ourselves let’s keep some of the people and test the (expletive) out of them, and we did that, and it helped. We did something that no one thought was possible. These guys are all going to jail and we’ll have cleaned it up.”

Just because Surick and others will no longer be near a racetrack, does that mean all is suddenly right with racing? This is far from the first time that individuals drugging horses have been caught, and usually there are other trainers to pick right up where the outgoing ones left off.

But Gural sees a real difference this time. “I think we’ve cleaned it up, because of two of the people arrested,” said Gural. This guy (Seth) Fishman and (Louis) Grasso are the two main suppliers of illegal drugs. And the assumption is that when the FBI sits them down to interview them, they’re going to make it clear that it’s in their best interest in order to have a reduced sentence to cooperate and help the FBI with who else was using illegal drugs. So, I expect that we – the FBI – will find out in short order who the customers were for Fishman and Grasso and that will be devastating because every single person that was using illegal drugs was getting it from one of those two people. Those two names are not recognizable, but those were the two most important names on the list.”

Even if what Gural hypothesizes becomes true, historically, racing has a tendency to fall back to the status quo. Sure, the feds came in this time to help clean up a game run amok, but we’ve seen for far too long racing’s inability to regulate itself. And I’m personally not one for the federal government to intervene in anything, but in this one case I may be inclined to agree with Gural.

For the Meadowlands boss, the indictments that came this week will “only be good if everybody embraces having the US Anti-Doping Agency (USADA) come in and take over all the testing… The legislation (Horse Racing Integrity Act) that’s pending in Washington would allow the federal government to get involved and they would then hire the USADA to do the drug testing rather than have 35 different states do the testing. I think it’s critical that we do that. I would think that there’s going to be a lot of pressure from the animal rights groups to shut down racing, period. If the industry doesn’t agree to change the method of regulating and how it’s done, then we’re going to be back over time in trouble. So, I think it’s critical that not only do we take this as a wake-up call, but we agree to send a message to the public that we care about these horses.”

In the short term, the news has been extremely bad for racing, but with it may come an opportunity for long term positive change. That is, if the industry is ready to finally do right by the ones who support it.