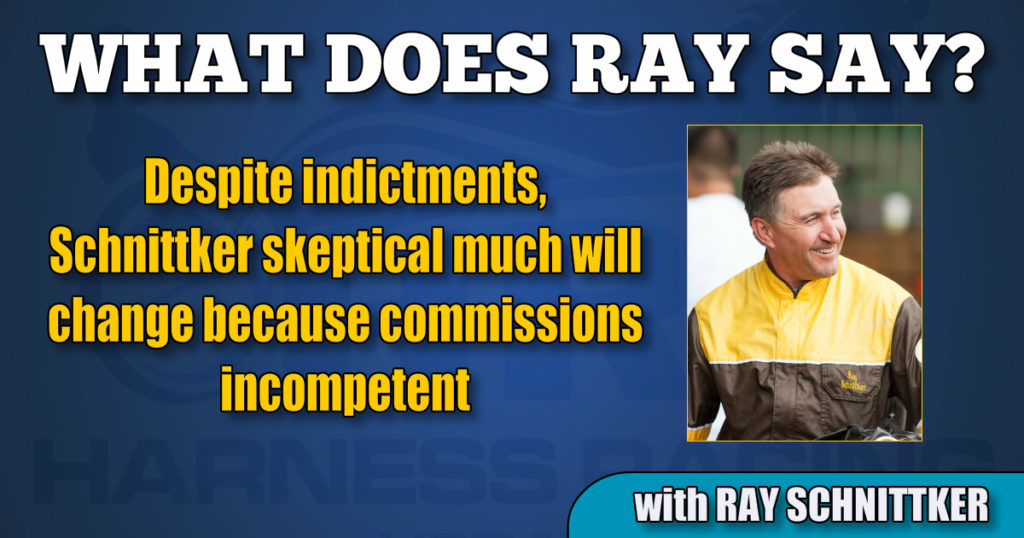 Despite indictments, Schnittker skeptical much will change because commissions are incompetent

When it comes to the 28 people indicted for a widespread horse doping scheme, Schnittker said they, “were a long time coming. I thought they kind of got it right. There’s probably another pile that should be (indicted) if the states get permission to get the tapes. One vet had all his clients on a computer that they took. That would be kind of interesting to see who all is on there, besides the ones they picked up.

“I did an interview on Spectrum 6 News here and I just blasted the commission, our regulators, for not doing their job. I mean, I haven’t seen a guy in 40 years,” Schnittker said. “So, if the commission wants to keep the ball rolling, and try to get some of this information, I think that stuff can happen, but knowing our racing commission, I don’t have a lot of faith in them.”

One of the things Schnittker said he is worried about is that horses will simply be transferred to another trainer and not much will change.

“The thing I’ve observed with the thoroughbreds is, as soon as those thoroughbred guys got nailed, those horses all left their barns. In our game, it seems like they just put another trainer down and the tracks and commission will say, ‘Oh, that’s just fine, here’s some guy I’ve never heard of but now he’s in charge of 70 horses.’ I really do think, when a month goes by, all of a sudden a guy comes in with 50 horses and no one has ever heard of him and no one says, ‘Boo.’ The whole thing should start again right there, investigating. Hopefully they can figure something out.”

Schnittker said he’s skeptical much will change out of the indictments.

“It seems like that’s just our culture – people love to cheat. F – – – it, nobody is accountable, though Gural kind of does it a little bit.

“He told me that about eight months ago… He called me up after that Josh Marks bulls – – – and he said, ‘You know, Ray, I’ve got something going. I can’t tell you yet, but it’s going to hit the fan here.’”

Schnittker said the Josh Marks case (full story here) is an indication little will change from the indictments.

“The Josh Marks thing, I had a lot of little guys saying, ‘Thank God somebody finally said something’ – and some bigger guys, too – but, as my wife said, they said ‘Good job’ but no one stepped up and did anything,” Schnittker said.

As for this week’s news, Schnittker said horse racing may have caught a bit of break that the indictments came this week when bigger news was breaking.

“I think we would have got more headlines, bad headlines, otherwise,” he said.