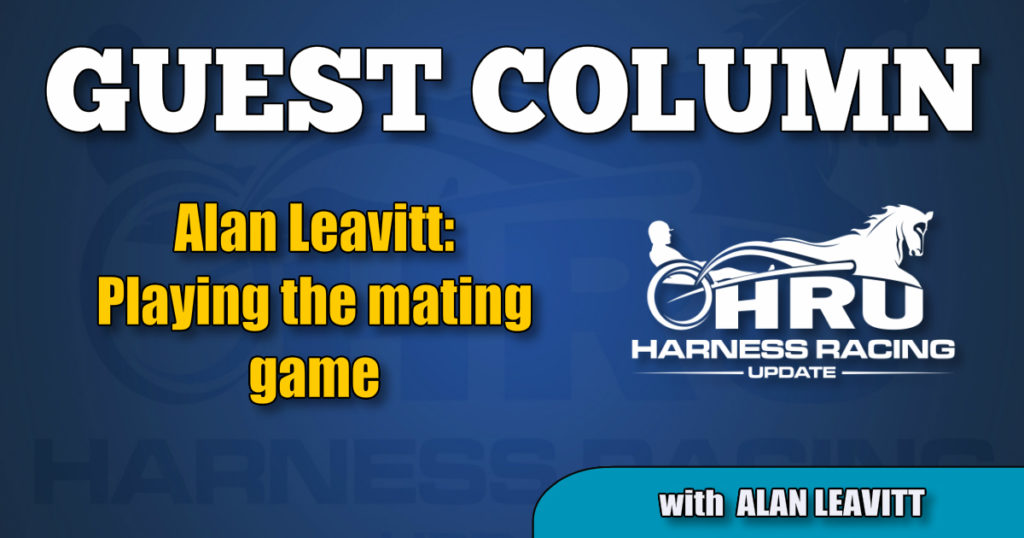 As a lifetime market breeder, doing the matings for our mares has always been relatively easy. For each mare, I just pick the stallion that I think will produce the highest-priced yearling. That was the way Jim Harrison did the matings when he was running Hanover Shoe Farms, which he passed on to me when he took over at Lana Lobell, and anything that was good enough for Jim has always been good enough for me.

Obviously my method takes into account the relative sizes of the two horses involved and common faults, like bench knees, which don’t need any emphasis. The genius of veterinary surgeons such as Dr. Larry Bramlage and Dr. Alan Ruggles, both of Rood and Riddle, lets you breed certain faults in a horse’s legs that they can surgically correct. We had a good producing pacing mare who stood out in both front legs, and so did all of her foals until Dr. Bramlage worked his magic and each one stood perfectly straight for the rest of their lives.

One concept to be avoided is the idea of a Golden Cross. The fact that a handful of mares by a certain sire produced some good horses by another sire has no scientific validity whatsoever. Like the Unicorn, the Golden Cross is an imaginary beast.

If one does want to try for something special, inbreeding is the way to go. Just to make sure everyone understands the term, inbreeding occurs when the same horse’s name occurs twice when the sum of the generations in which it appears is six or less. Thus a horse sired by Walner, a grandson of Conway Hall, out of a mare by Wishing Stone, also by Conway Hall, would be inbred 3 x 3 to Conway Hall.

Inbreeding was described by Jim Harrison as like playing catch with a bottle of nitro-glycerin. One can’t be too careful. When you inbreed, certain common traits are magnified. Obviously you want to only magnify speed, soundness, correct conformation, and sensibility. Which means the two individuals you choose to inbreed with must be as near perfect as horses can be.

In the founding generations of any equine breed, inbreeding is the key. Look at any of the pedigrees of any of the first few generations of standardbreds, and they read like the lyrics to that old Country and Western novelty song, I’m My Own Grandpa (I have the complete lyrics, if anybody wants them).

Once the breed is established, as ours is, inbreeding becomes a tricky proposition. Like the wife of a Pennsylvania Dutch couple who had three sets of twins, when questioned by a visiting tourist from New York who asked, “Twins every time?” She answered, “No, no, hundreds and hundreds of times, nothing at all.”

There probably are hundreds of times inbreeding has produced nothing of note, none of which have been recorded. But there are horses such as CR Kay Suzy, whose paternal grandsire and maternal granddam are full brother and sister, who show what can happen when inbreeding works.

Rainbow Blue, a truly great pacing filly and mare, was also bred like a line out of I’m My Own Grandpa. So it can work, and when it does, you can just see the sparks fly. Personally, I almost always go where I think we’ll do best in the sales ring, but every now and then, I like to see if I can make the sparks fly.

N.B. Even when you’re breeding strictly for the market, there are a number of considerations to take note of. A first-year stallion is always a good bet. There’s always a good market for the first crop by any horse that did well on the track.

A second-year stud is dicey. You’re betting the horse hits with his first crop, and if he doesn’t, you’re in trouble. Parenthetically, many of our best sires showed up in their second crop, not their first. And many of the sires who hit like gangbusters with their first crop never lived up to those heights again. If there’s some logic here, I can’t find it.

Third-year horses are equally risky. So it boils down to either first-year stallions or ones who are well established, which means a handsome stud fee.

But I’ve already talked about that, and the Democratic debate is about to start. Now there’s a bigger challenge to pick a winner than who to breed your mare to!