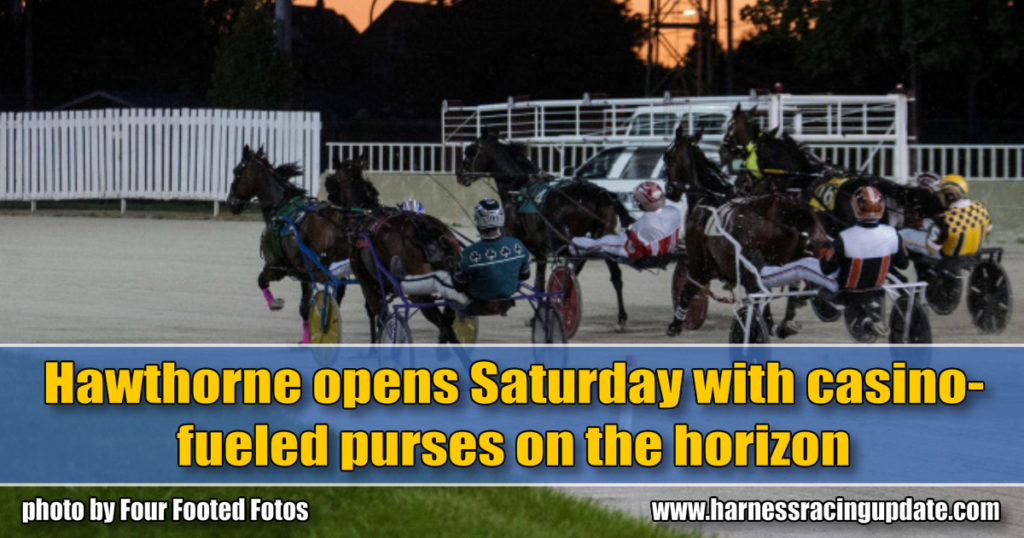 The longest Hawthorne’s standardbred meet in history begins Saturday with everyone involved dreaming of the day a casino can open there to augment purses.

There will be 104 nights of racing during the meeting that won’t hit the finish line until Sept. 20.

Hawthorne’s longest previous continuous meeting was last year when it put on 72 programs from May 3-Sept. 22.

After a lawsuit resulting in bankruptcy put Balmoral Park and Maywood Park out of business in 2015, the sulkies returned to Hawthorne for the first time since 2008 for Jan. 1-13, March 3-May 1 and Sept. 26-Dec. 31 meetings.

The standardbreds and thoroughbreds have been time-sharing at Hawthorne since 1970. From 2003 through last year, the runners had a spring meeting there before moving to Arlington International Racecourse for the summer and then coming back in the fall.

However, Hawthorne didn’t apply for thoroughbred dates this spring in order to accelerate and facilitate the remaking of the track into a racino. Last year, the Illinois General Assembly passed a massive gaming expansion bill and signed by Gov. J.B. Pritzer that allows casino gambling at racetracks starting in 2020.

Hawthorne president Tim Carey applied for a license on the day applications opened, Aug. 26, hoping to get the $350 million renovation project underway in January and have it finished by the Oct. 1 start of the thoroughbred meeting. His rationale for having harness racing in March and April instead of thoroughbred racing was to enable construction crews to work throughout the day.

Leaders of the Illinois Thoroughbred Horsemen’s Association (ITHA) agreed that the project would cause significant problems if they trained in the morning and raced in the afternoon and supported Carey’s proposal.

“The focus should be on Hawthorne,” said ITHA president Mike Campbell. “They’re willing to put up hundreds of millions of dollars.”

Unfortunately, the Illinois Gaming Board review of the application has taken longer than expected. The applications submitted by Hawthorne and Fairmount Park, the thoroughbred track across the Mississippi River from St. Louis, are unique for a regulatory body that hitherto has had only casino and video gaming applicants. Moreover, the casinos are corporate entities while Hawthorne is a family-owned business that has 60 shareholders.

Carey said he has high hopes that he will get the go-ahead sometime this month and, in the meantime, the preliminary preparations have been made.

Plans call the casino to occupy 4,000 square feet on the second floor.

Amid all of the activity, it will be business as usual for racing secretary Robin Schadt.

“It’s a similar template to what we’ve done the last couple of years, nothing new or added,” she said. “In February, March and April, racing will be geared toward the hard-knocking overnight horses. The series we had last year will commence in May and all of our Night of Champions (preliminaries) will start at the end of May. Our Night of Champions (11 stakes races for Illinois-breds) will be on the last Saturday night of the meeting.”

Casey Leonard, who has won every driving championship since Hawthorne resume harness racing in 2016, will be back to try to perpetuate his monopoly, and his father, Terry Leonard, will be in quest of his third straight trainer title during that time frame.

Although it will be the longest Hawthorne meeting on record, the racing weeks will be very short, consisting of Saturday and Sunday nights from Feb. 15-29 and Fridays, Saturdays and Sundays from March 1-Sept. 20.

Illinois-breds are the foundation of the racing program and they have been in short supply in recent years because breeders have been foaling their horses in Indiana and Ohio where racino-funded racing has produced financially robust meetings. From an all-time high of 2,535 Illinois foal registrations in 1983, the numbers nosedived to 182 in 2016 and 144 in 2017 before going up to 268 in 2018.

“Our purse structure is still respectable, but it’s not competitive with the casino tracks,” Schadt said. “Once our casino is up and running our purses will go up significantly (thanks to a minimum revenue stream of 12.75 per cent that will be earmarked for purses).

“In three years I think we’ll be on top of the mountain.”

Carey is of the same opinion. He believes Hawthorne’s casino will lead to “the redevelopment and regrowth of racing in Illinois.”

“We’ve been waiting 15 years for this opportunity,” he said. “This is what it’s all about.”

Although a sense of optimism still abounds, Illinois harness racing experienced a major setback last October three weeks after the Racing Board awarded the 2020 dates. The board was forced to amend its dates order and rescind the 12-night Dec. 6-29, 2020 meeting it awarded Playing in the Park, a proposed state-of-the-art racino in south suburban Tinley Park, thwarting Carey’s hopes of coordinating his future harness meeting with those of the new track.

The dates were taken away after Gov. Pritzger’s office informed the village that the state-owned land on which the harness track/casino was to be built was no longer for sale. That decision was prompted by Chicago Tribune disclosures detailing the long-standing business relationship of would-be racino owner/operator Rick Heidner with Parkway Bank chairman Rocco Suspenzi, who allegedly also has had dealings with Mafia members.

Heidner is a real estate developer and the state’s third largest video gaming operator with 500 slot machines. He denied any Mafia connections and pointed out that his video gaming licenses have been approved by the Illinois Gaming Board.

However, with his video gaming license up for renewal this month, Heidner found himself in hot water in December when the Gaming Board threatened to revoke the license because of a deal he allegedly was trying to make with Laredo Hospitality, which planned to remove 44 of his terminals from restaurants it had purchased.

The Gaming Board charged that Heidner offered to purchase the restaurants for $5 million more than the new owner had paid for them and arrange for a quick resale in order to keep the video gaming terminals in the restaurants. This would be a felony under the state law that stipulates it is illegal to give anything of value to an establishment as an incentive or inducement to locate terminals in that establishment.

Heidner is maintaining he is innocent of any wrong-doing and no charges have been filed against him in connection with either the Laredo Hospitality case of the proposed Tinley Park harness track/casino.

Another December development was the purchase of Balmoral Park by Phil Goldberg’s Team Real Estate Development, LLC. from HITS, Inc., a New York-based company that acquired Balmoral during bankruptcy proceedings and renovated the property to hold hunter/jumper horse shows.

Goldberg wants to resume racing and introduce gaming but there are significant impediments. The deed from the bankruptcy sale prohibits pari-mutuel horse racing, casino gaming or any other type of gambling on the property until 2026. In addition, while the 2019 gaming expansion legislation calls for a new harness track/casino it stipulates that the racino must be located in any one of six south suburban Cook County Townships. Balmoral is in Will County, putting it outside the statutory boundary.

Until a new track is built ,the future will remain hazy for the horsemen who race in Illinois but they can rest assured when they race at Hawthorne their purses will be much higher than currently because a minimum of 12.75 per cent of the casino revenue will flow into the purse account.

Hawthorne is the only pari-mutuel harness track in Illinois which had seven other harness tracks when it introduced the sport in 1970 after operating solely as a thoroughbred track since it came into the racing world on May 20, 1891. The property was acquired by Tim Carey’s great grandfather, Thomas H. Carey, in 1909 and after three unsuccessful attempts to revive racing, which had been banned in Chicago in 1905, he finally succeeded in 1922.

The State Fairs at Springfield and DuQuoin also have pari-mutuel harness racing but it’s confined to a few days while the fairs are in progress so it would be misleading to categorize the fairgrounds as harness tracks.

Hawthorne’s golden anniversary meeting has been prefaced by a sad note because the track lost one of the most important individuals in its history on Dec. 22 when former track president Tom Carey died at age 87. Tom succeeded his deceased father, Robert F. Carey, as track president in 1980 and remained at the helm until 2006 when he was succeeded by his nephew, Tim, in 2005.

Tom was a quarterback at Notre Dame during the Frank Leahy coaching dynasty and after college he won great acclaim as an outstanding high school football coach during a five-year career at Mount Carmel, his high school alma mater in Chicago.

But instead of pursuing a college coaching career the Northwestern Law School graduate chose to join his father’s law firm.

“After I took over we would sit for hours and talk,” said Tim. “He loved being around the racetrack and talking about the intricacies of horse racing and his experiences (but) he would say: ‘I wonder if I made a mistake. I could have been a coach anywhere I wanted to coach.’”

Tom’s greatest racing achievement was rebuilding Hawthorne after the track’s clubhouse and grandstand were destroyed in a fire set by an unknown arsonist on Oct. 9, 1980. The track was insured for approximately $4 million but the damage was estimated at between $10 million and $14 million.

“Most people thought we had no shot at rebuilding,” Tom would later tell Hoof Beats. “Even some members of the family felt that way.”

His father vowed to rebuild but was in in failing health. So, it was up to Tom, who had been serving as his assistant, to find a way.

Eventually Tom came up with a complicated plan. He persuaded the village of Stickney, where the track is located, to issue $10 million in industrial revenue bonds and arranged for Chicago’s Continental Bank to buy the bonds. Then, Hawthorne entered into an agreement with the bank to pay the interest and principal and the bank made an arrangement with the builder that was akin to a mortgage.

Hawthorne was rebuilt and reopened on Feb. 18, 1980 for the last week of its harness meeting.