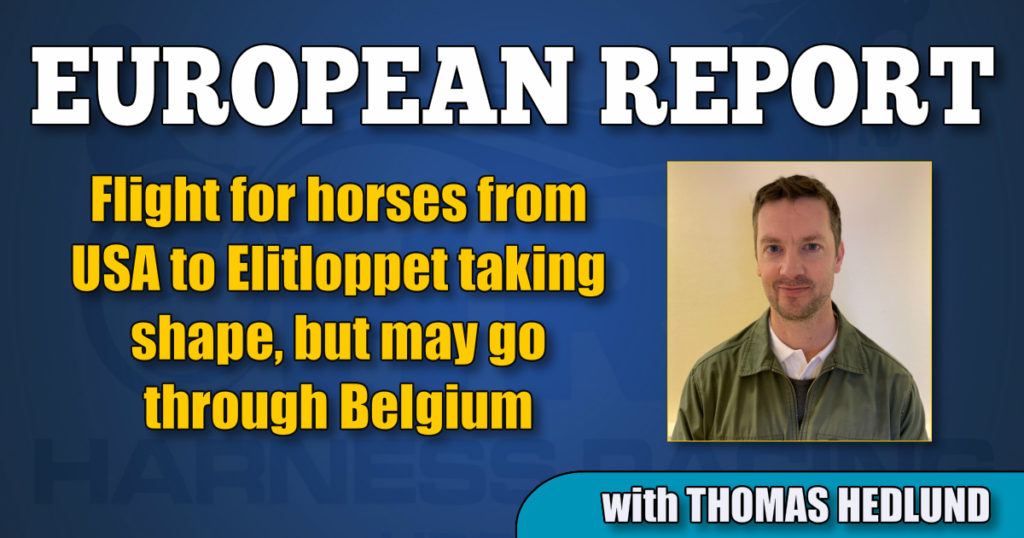 Flight for horses from USA to Elitloppet taking shape, but may go through Belgium

Solvalla’s sports director Anders Malmrot confirms it may be possible for American trotters to join a plane that will bring horses to Solvalla for the Elitloppet in the end of May.

“That’s the way it is and the plane will go to Belgium, but if this is going to be a reality, we need really interesting horses that want to come. We have already booked a flight for the French horses from Paris to Stockholm and if we can connect any horses from America to that plane, it would be nice,” Malmot said. Marcus Melander has a couple of very interesting 4-year-olds in his barn and the successful trainer has obvious plans on making the trip with at least one of them.

”As far as I understand, there will not be a direct flight to Sweden and we haven’t solved an eventual trip from Belgium to Stockholm, but I’m interested in going to Sweden with Gimpanzee this year,” Melander said.

The Elitloppet gets a little bit more spicy and exotic when American trotters make the journey over the Atlantic ocean, that’s a fact, but the logistic problems have to be solved before the European harness racing fans can see horses such as Manchego and Gimpanzee on a Swedish track.

“Manchego, together with Gimpanzee, is at the top of my list of horses that I’m interested in this year and I agree that the whole idea about Elitloppet is that the best trotters from all possible continents should compete over the mile at Solvalla. That case makes the whole event so much more spectacular for the active horsemen and the spectators,” said Malmrot.

The $385,700 Prix de France over 1.3 miles was held at Vincennes racetrack last Sunday and once again, the top duo in the Prix d’Amérique earlier this year, played the main roles in the race.

Five-year-old Face Time Bourbon (Ready Cash), who was successful in the PdA two weeks earlier, had to struggle with a pretty bad post position when the car accelerated away from the field and what seemed to be a surprisingly great trip for the Sébastien Guarato-trained trotter ended up a tactical one for Jean-Michel Bazire. Bazire’s choice this time was Davidson du Pont (Pacha du Pont), who was runner up behind Face Time Bourbon in the PdA, and a quick start ended with a position first over while Uza Josselyn kept the strong pace in front.

Bazire knew that he had Björn Goop and Face Time Bourbon in his back, so instead of pushing for the lead, Bazire waited until three wide trotter Vitruvio was on his way forward towards the top duo. At that point Davidson du Pont could get the control in the lead and the most important thing for Bazire was that Face Time Bourbon didn’t get the right cover in second over.

Eventually, Face Time Bourbon was seen in third over and when opponents attacked three wide and closed the door for Goop, Bazire had everything under control in front. What seemed to be an easy win for Davidson du Pont ended somehow in a spectacular home stretch battle since Björn Goop in some magic way found his way between horses with Face Time Bourbon. And the speed that both Face Time Bourbon and third-placed Delia du Pommereux delivered was unique. They couldn’t reach leader Davidson du Pont, who won in mile rate 1:54.2, but the impressions of them both was that they are something extra.

In the $222,800 Prix des Centaures monté race, 6-year-old Evangelina Blue (Speedy Blue) started 25 meters behind the front horses in a 1.3 miles long race, but that handicap didn’t bother the Jean-Philippe Mary trained mare. Evangelina Blue got encouraged by the high pace in front and she sprinted to safe win in 1:56.